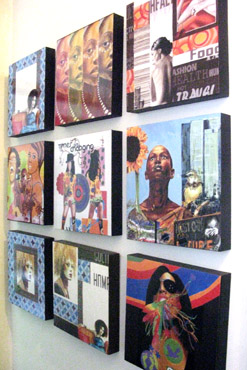 Paintings produced by members of the
Amajobjob community. 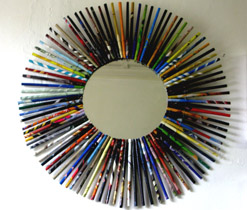 A mirror frame made with with recycled
material on sale at the Amajobjob studio. 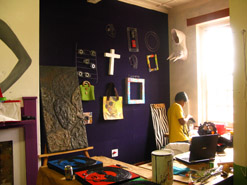 Creative spaces such as this workshop
enable the artists to produce high-quality
work.

In the heart of Pretoria’s inner city men and women with little or no previous experience are creating exquisite arts and crafts.

The artists form part of the Amajobjob initiative, which helps individuals from disadvantaged communities find involvement and dignity through meaningful employment.

The movement is founded on the premise that every person is deserving of dignity regardless of their identity.

Amajobjob (meaning plenty of jobs) is the initiative of Vivienne Schultz, a professional occupational therapist.

During her professional lecturing days at the Medical University of South Africa, she realised that a person’s outlook on life was attached to the way their life would turn out.

It was then that she started devising the “A2B strategy”, which helps to psychologically transform the way people think about themselves and their lives.

The A level is the starting point, where Schultz says most of the people would be when she starts working with them.

“The A stage, for instance is the guy begging at the street corner, carrying a placard asking for help. That is still the dependency stage where a person is not taking responsibility for themselves,” she says.

Schultz says people stuck in the A level of their lives are usually characterised by lack of initiative. For instance, the individual has a sense of entitlement, and doesn’t show structure in their life.

Through a series of personal growth workshops, Schultz then helps the individual move to point B, where they are then able to start understanding themselves better, map out their personal vision and the process of empowerment begins.

The problem, Schultz says, which keeps most people in level A, is what they believe about themselves.

“The spiritual poison is that people are told in many ways that are inferior and second-rate and losers. Such a people can be given any opportunity and they will ensure its failure because they believe in their own uselessness.”

Amajobjob aims to change that, by creating what have always appeared to be unimaginable opportunities to those who have been previously disadvantaged.

Through the work of Amajobjob, they are able to learn skills like making handbags, beaded work, various art works and clothes. Some are encouraged to create and produce ranges aimed at interior decorating.

According to Schultz, Amajobjob’s foundation is based on creating an “innovative empowerment culture”, which restores human dignity, and also encourages entrepreneurship.

Amajobjob is also the flagship programme of the project E-Hubs Africa, a wider and more involved programme.

E-hubs Africa is based on the premise of enterprise development for sustainable transformation.

Those who form a part of Amajobjob are able to make a living by selling their handmade crafts. All the products created are made from recycled goods and raw materials.

Various types of products are made by the Amajobjob team under different ranges.

“Our interior décor range for both office and home is called the Kitch ‘n Cool range – which consists of an extremely creative, colourful and funny range, while the clothing range is called Funky Fashions.

“Raw Range is made up of very high quality interior décor range made using all natural materials. It looks like your typical ‘waylands’ style furniture. The Corporate Range consists of corporate gifts available to be made for order and as well as office décor,” explains Schultz.

According to Schultz, there a number of objectives that they would like to achieve with the project:

Amajobjob is hoping to bring not only financial relief, but also a sense of self-confidence and self pride to nearly 720 people in 2009 alone.