A member of the Siyazama Project shows
off two examples of her beaded dolls.

Themes such as gender inequality, rape
and sexual harassment; the plight of Aids
orphans; and the role of rural married
women are evident in Sizayama crafts.
(Images: Siyazama Project) 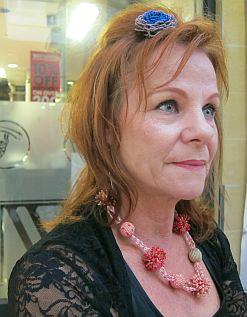 Kate Wells, the founder of the Siyazama
Project, said that the collaboration with
FRONT is aimed at designing crafts
that would be marketed internationally
at high level design outlets.
(Image: Society for the Arts in Healthcare)

The Siyazama Project, featuring traditional beaded crafts from the Kwazulu-Natal hinterlands, has taken the art world by storm and is giving dignity back to those affected by Aids.

The project, started in 1998, gives the craftswomen involved a creative outlet to express their concerns about HIV/Aids and all of its complexities, through their colourful beaded cloth dolls and beadwork.

It also allows the rural women to earn an income, as many are the sole breadwinners of their households because their husbands are migrant workers.

Siyazama is an isiZulu word meaning “we are trying”.

Initiated by Professor Kate Wells, senior design lecturer at the Durban University of Technology (DUT), the project was implemented as part of the design department’s Design Education for Sustainable Development initiative.

There are 11 main contributors to the project but the number depends on orders – if there are many, the women will bring in family members to help.

Wells said: “I learnt about the women through the African Art Centre in Durban in the mid- to late 1990s. The women made beaded dolls but could not access quality fabrics and beads.

“We secured initial funding from the Ackerman Foundation, National Research Fund and the British Council to buy material.”

At that time the stigma surrounding HIV/Aids was still rife in rural areas, and most people didn’t know the facts around the disease.

“We were busy in our creative space and I could see there was something troubling the women so I asked what was wrong. They told me about this disease that they are afraid of and that everyone in their community was talking about,” said Wells.

Wells said that although the Siyazama project started out as a way to help the women become self sufficient, this is why it evolved to become an Aids awareness initiative.

Wells said: “Combining art and education was always evident in the women’s beaded dolls, as they would make dolls of raped women which were very graphic. This shows how the women communicated the struggles which were frowned upon in their communities.”

Wells said there was a time when she gave them condoms to take home and was saddened by the repercussions.

“Some of the women came back and revealed that they were beaten and verbally abused by their husbands,” she said. “I realised then that the approach had to be subtle and would involve building the confidence of the women to speak about it with their family and community.”

The women are now “super-confident” according to Wells and are now regarded as Aids experts in their community, giving advice to young and old regarding the disease.

Taking Siyazama to the world

Confidence has also been boosted by overseas visits involving exhibitions, interaction with other artists, and sharing secrets to their craft.

The project held an exhibition at the Museum of Domestic Design and Architecture at Middlesex University, London in January 2003 – it was titled No Name Fever: Aids in the Age of Globalization.

Later Siyazama took part in a large international exhibition of art and Aids in Gothenburg, in Sweden in 2005, and went on display at the Michigan State University Museum for over a year in 2006/7.

In 2009/10, in conjunction with Konstfack Art and Design School in Stockholm, Sweden, Siyazama began working with an all-female designer group called FRONT.

The aim was to design crafts that would be marketed internationally at high level design outlets.

In December 2011 the project exhibited at The A.R.T. Show at Durban’s Tatham Art Gallery.

They exhibited a tower of 640 tiny beaded dolls that depicts the number of HIV/Aids orphans in Dannhauser, Kwazulu-Natal.

Wells said: “Siyazama craftswomen produced hundreds of small, beautifully beaded child-figure dolls that collectively make a strong statement about the statistics with regard to Aids orphans in South Africa.

“Our aim was to make sense of these statistics visually through an installation, from which we hoped to build awareness of the growing inhumane calamity in our part of the world. We saw it as a call to action.”

South Africa is believed to have 3.7- million Aids orphans.

Linda Rethman, Siyazama’s marketing manager, said: “This year we will also have a 2.5m high tower at OR Tambo Airport on display. Similar to the one shown at the Tatham Art Gallery, it will be on display at Tiger’s Eye in the departures section.”

Putting it down on paper

The project has produced a new book, Siyazama: Art, Aids, Education in South Africa. The publication is a joint collaborative effort between Michigan State University in the US and the DUT.

Wells said: “This is something that I always wanted to do. This book will always be available for generations to come to see what these amazing women were able to do.”

The book has six chapters with biographies of all the women involved in the project. It also outlines works by the project and has contributions from professors with extensive knowledge on art and Aids. 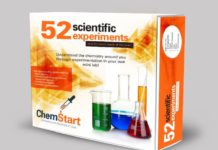