South African Zackie Achmat is the co-founder of the Treatment Action Campaign and the man who took the fight for affordable and accessible antiretroviral drugs to governments and big pharmaceuticals – and won, saving millions of lives.

Achmat will be the subject of a 21 Icons documentary, which will be screened in South Africa on Sunday, 1 December, World Aids Day. The project aims to celebrate the lives of 21 “extraordinary South Africans who have captured the global imagination with their dignity, humanity, hard work and selfless struggle for a better world”.

A black-and-white portrait of Achmat by Adrian Steirn, who conceptualised the project, will be published as a commemorative poster in the Sunday Times.

Achmat became an activist at an early age, participating in the 1976 uprising against Bantu education as a 14-year-old.

“We had unqualified teachers,” Achmat says in his 21 Icons interview. “We had a serious lack of textbooks, broken schools, bad infrastructure, corporal punishment, really horrible principals with no qualifications and a terrible attitude towards kids.”

He says his capacity to take a stand against injustice probably stems from his sexual orientation. Achmat came out to his parents when he was 10.

“I think it came with the fact that I was gay and having to take a stand on that with my parents, who were religious, and them not understanding. Having to take that stand made it much easier to take any other stand,” he says.

Achmat was diagnosed with HIV in 1990 and believed he would die shortly after. “In 1990, people – even doctors – believed that you had six months left to live from the point of diagnosis. It was very difficult. I spent six months in bed watching all the videos I ever wanted to see and reading all the books that I wanted to read. And then one day I woke up and thought, I’ve put on weight. And I’m still here.”

Taking up the fight

Achmat shared his status openly. “I told my friends and comrades. I didn’t hide it,” he says.

By 1996, antiretroviral drugs (ARVs) were available and the people who took them stopped dying. But in South Africa, their prohibitive cost meant they were out of reach of the people who needed them most, the poor.

Achmat realised HIV had become a human rights issue and he took up the fight against exploitative drug companies and discriminatory health policies.

He also took the fight to a personal level: “At that time I was also starting to get sick. I was sick all the time … I decided not to take antiretrovirals as a protest against drug companies, because I believed that they should be available to everyone.”

Not even Nelson Mandela, who visited Achmat at home in 2002 in an effort to persuade him to take his medicine, could change his mind. “I think Madiba understood when I spoke to him that it was an issue of principle,” Achmat tells the 21 Icons team.

“I thought I would die, but I also knew that hundreds of South Africans were dying. At least 600 South Africans a day were dying because of HIV and because the government was neglecting the issue.”

Achmat refused treatment until 2003, when a national congress of TAC activists voted to urge him to start taking antiretroviral drugs. But it was a visit by Mandela to an HIV clinic on the Cape Flats that finally changed his mind.

“[Mandela] put on this HIV T-shirt when he visited Khayelitsha Site C clinic. It was a few days before the ANC national conference in 2003 in Stellenbosch. That moment I realised that I could take my pills, because what he had done then was to take a stand against a party that he had given his life to,” Achmat says, referring to the then-government’s stance on HIV.

Shortly after he started taking his medicine, the government announced that it would make ARVs available in the public sector. Another victory was that global pharmaceutical companies agreed to provide access to generic HIV/Aids medicines that would save – and continue to save – millions of lives each day.

Even though his record speaks of tremendous conviction and courage, Achmat denies he is brave. “No, stubborn,” he says. “Stupid sometimes, and motivated by fear for what can go wrong.”

Achmat continues to fight for social justice issues such as proper sanitation in South Africa’s poorest townships. He is also active in Equal Education, a movement working for quality and equality in South African education.

“Nothing angers me like injustice, but I don’t stay angry, because you can’t struggle and win if you’re angry,” he says.

Achmat’s portrait will be auctioned at the end of the series, with the proceeds going to the Social Justice Coalition. 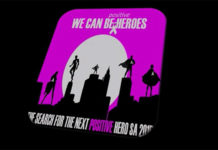 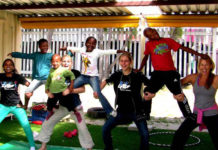 Community workers save the day