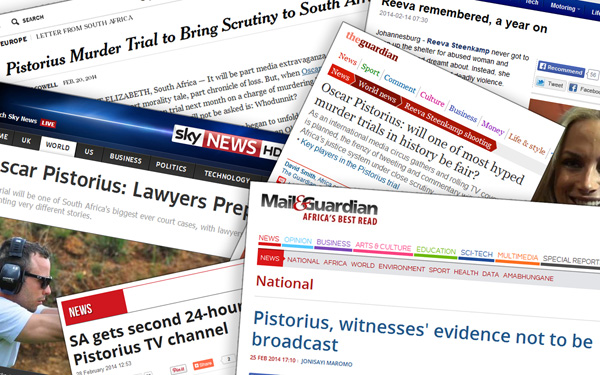 Paralympian athlete Oscar Pistorius’ murder trial, set to start on Monday 3 March, is a landmark case for the media. A groundbreaking court ruling makes it the first time in South African history a criminal trial will be broadcast live on TV, instantly streamed via audio apps, and live-tweeted to the world.

On Tuesday 25 February Gauteng judge president Dunstan Mlambo ruled in favour of an application by Multichoice and Eyewitness News to broadcast the trial. It will be shown on two news channels on satellite TV service DStv, as well as on eNews Channel Africa (eNCA) and a special channel under the banner of MNet’s investigative programme Carte Blanche. But the judge ruled that only certain parts of the trial – the opening and closing arguments, expert witness testimony, judgment and sentencing – may be broadcast on TV. Radio broadcaster Eyewitness News, eNCA and Multichoice will, however, be allowed full audio coverage of the trial.

Under Mlambo’s ruling, Multichoice must provide a free feed to other television channels. According the Associated Press, the broadcasts may also be made available to international stations through a sharing agreement.

Pistorius is facing charges of premeditated murder and the illegal possession of ammunition after shooting Reeva Steenkamp, his girlfriend, to death through the closed bathroom door in his house on 14 February 2013. He claimed to have mistaken her for an intruder. In December last year two additional charges were added to the trial, for separate incidents of illegally discharging a firearm through the sunroof of a car, and under a table at a restaurant.

George Mazarakis, executive editor for the Carte Blanche channel, said in an interview with AFP that judge Mlambo’s ruling set a precedent and was a victory for open justice. “We are thrilled that the South African judiciary has matured to this ground-breaking decision. It is a seminal moment and will make South African television and legal history as visual access of this nature has never before been granted in a South African court.”

Eyewitness News editor-in-chief Katy Katopodis said in her web column that the ruling was a sign the justice system was moving with the times. She said the live broadcast of the trial will simply be an extension of the live tweeting reporters do when covering court cases. The broadcast, she said, would be no different from the principle of open justice, under which any person was allowed to walk into a courtroom and listen to a case.

Normal witnesses can refuse consent to have their testimony broadcast, Katopodis said. “We can, however, have the testimony of witnesses who are expert witnesses, whose job essentially it is to give testimony in court cases like this.”

In the hearing, Pistorius’ lawyers argued that television cameras in the courtroom would prevent him from having a fair trial. They said the broadcast of witness evidence may allow tailoring, fabrication and adaption of evidence.

But Mlambo said the trial is in the public interest and having cameras in the courtroom would ensure a greater number of people, especially those unable to attend the proceedings, would be able to follow it wherever they may be. “Particularly those who are poor and who have found it difficult to access the justice system, they should have a first-hand account of the proceedings involving a local and international icon.”

Meanwhile, Pistorius’ public relations team has launched a Twitter account – @OscarHardTruth – which it claims will reveal the truth about the shooting.

Pistorius’ family has also made the decision to turn his official website, once used to chronicle his exploits on the track and his charitable activities, into a news website featuring the latest developments in his trial, and a space for messages of support.

The website states that it will provide the opportunity for the media to make enquiries or requests, but the family may not always respond or comment because of legal reasons.

Conditions imposed on the media

Judge Mlambo’s ruling has been hailed as a victory for media freedom, but he did impose a number of conditions to ensure broadcasters would not interfere with proceedings. These include:

Main players in the trial

Come Monday, all cameras will be focused on Pistorius. But little is known about the other role-players in the trial, namely the presiding judge, Thokozile Masipa, prosecuting lawyer, Gerrie Nel, and Pistorius’s lawyer, Barry Roux.

Since becoming a high court judge in 1998, Thokozile Masipa has distinguished herself in three major trials. According to the Mail & Guardian, she threw out a R85-million unfair dismissal lawsuit against Eskom brought by former Eskom chief executive Jacob Moroga. She also presided over the City vs Occupiers case, in which she maintained that the City of Johannesburg had failed to fulfil its obligations to find alternative accommodation for squatters threatened with eviction from old warehouses in Berea. And in 2011, she had handed serial rapist and robber Shepherd Moyo a 252-year sentence after a two-year crime spree.

A former crime reporter, Masipa was the second black woman to be appointed to the bench after Constitutional Court judge Yvonne Mokgoro.

Advocate Gerrie Nel is a state prosecutor for the National Prosecuting Authority. He previously headed the Gauteng division of the Directorate of Special Operations, also known as the Scorpions. In 2010, he successfully prosecuted Jackie Selebi, the former South African Police Services commissioner, who was found guilty of corruption and handed a 15-year prison sentence.

Senior advocate Barry Roux has won out in a number of high-profile cases, including tax charges against mining magnate Roger Kebble, the father of politically connected murder victim Brett Kebble. At Pistorius’ bail hearing, Roux’s masterful cross-examination skills helped secure the athlete’s release on a R1-million bond. According to the Mail & Guardian, his sharp questioning may have changed the course of the case.

Case investigator lieutenant-general Vineshkumar Moonoo was appointed as the head of the Pistorius murder investigation after detective Hilton Botha resigned from the police in March 2013. Police commissioner Riah Phiyega has described him as the “top detective in the South African Police Service”. He has led a number of high-profile investigations, including the 250 robberies where suspects wore police uniforms and used blue-light vehicles, and the bombing of Czech businessperson Radovan Krejcir’s gold dealership in Bedfordview, Johannesburg.

There are 107 witnesses listed for the trial from friends and neighbours to security guards at the Silverwoods Country Estate, where the shooting took place.

Pistorius’ ex-girlfriend Samantha Taylor will testify for the prosecution. She has claimed to have witnessed the runner angrily fire a gun through the sunroof of his car after being stopped at a police roadblock. After they broke up, her mother, Trish Taylor, reportedly posted on Facebook that she was glad Samantha was “out of the clutches of that man”. The alleged comments were later removed. Trish will also take the stand at the trial.

Christo Menelaou, Pistorius’s neighbour at Silverwoods, will also testify. In a Drum magazine article, he claimed to have woken up startled by what sounded like three thunderclaps at eight minutes past three in the morning. An hour later, when he went to the bathroom, he peered outside and saw blue and red lights flashing outside Pistorius’s house.

The Carte Blanche channel will feature interviews with expert guests from around the world, including US criminal defence attorney Robert Shapiro, famous for his successful defence of murder accused OJ Simpson in 1995. Also on the panel will be senior legal experts, psychologists, social commentators, social media analysts, American forensic experts, and police consultants to hit crime-TV shows such as Dexter.

According to eNCA group news editor Ben Said, the station will cover large parts of the trial in much the same way as Carte Blanche. Karyn Maughan and Annika Larsen will be the correspondents on site. The channel will consult a number of experts to analyse the trial but Said did not provide any names. “We have lined up both local and overseas justice criminal experts, forensic experts and legal experts.”

While TV coverage will be slightly limited, the full trial will be available on radio and streaming audio. Eyewitness News, part of the Primedia group that owns the stations Talk Radio 702, 567 CapeTalk, 94.7 Highveld Stereo and 94.5 Kfm, will provide the public with a continuous audio feed of the trial, accompanied by analysis.

The feed will be available, for free, via streaming apps – both iOS and Android – provided by the four Primedia radio stations.

An extra pop-up station positioned as “Gavel-to-gavel coverage of the Oscar Pistorius trial” will stream audio from the courtroom live each day from 09h00 to 16h00. This will be available on all four stations’ websites, free of charge. David O’Sullivan and Gushwell Brooks, who both have legal backgrounds, will present the show. Primedia said it would make copies of the daily audio streams available to international listeners across different time zones.

Eyewitness News Pretoria correspondent Barry Bateman will cover the trial for Primedia’s radio stations, and live-tweet it as it unfolds. Bateman was one of the first to report the case on Twitter, sending his follower count up by over 100 000 in the week after Steenkamp’s death. Bateman is also co-author, with his colleague Mandy Wiener, of a forthcoming book about the case. Follow him @barrybateman.