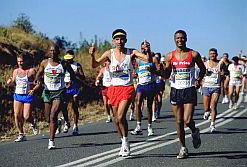 This year marks the 86th year of the
Comrades Marathon, and has attracted
19 617 runners.
(Image: southafrica.net)

The 2011 Comrades Marathon taking place on 29 May promises to be the most competitive edition yet. For the first time in the history of the race, top Ethiopian runners have entered and are set to pose a great threat to defending champions. The race has also seen an increase in entrants from the UK, US, Australia and Brazil.

Now in its 86th year, the 89km ultra marathon – dubbed the Ultimate Human Race – has attracted an overwhelming number of entries from all around the world, resulting in a field of 19 617 competitors. This year’s entrants are 78% male and 22% female.

Chairperson of the Comrades Marathon Association Peter Proctor said this year’s success is a result of the country’s successful hosting of the first African Fifa World Cup.

“After the excitement of the Fifa World Soccer Cup last year, the Comrades Marathon also celebrated a great year.”

Proctor said it is exciting to see that the 2011 race has attracted so many entrants. “The Comrades Marathon’s ability to attract runners from all walks of life firmly attests to its domination of the South African road-running calendar.”

This year’s race will be run from Durban to Pietermaritzburg, KwaZulu-Natal’s two major cities. This is known as the “up run” as it has more climbs from the coast inland. As this route is more challenging, it’s 2km shorter than the 89km “down run” from Pietermaritzburg to Durban – the route followed every alternate year.

This year’s runners will face five major hills along the way, popularly known as the “Big Five”. Cowies Hill is the first one, about 14km from the start. It is a moderately difficult climb, rising about 137m in the space of 1.5km.

Fields Hill is the second one, about 22km from Durban, and rises 213m over a distance of 3km.

Botha’s Hill follows with a gentler altitude rise of about 150m and covering a distance of 2.4km. At the top of this hill there is a human landmark well-known to all veteran Comrades runners. Every year since the marathon began, boys from local high school Kearsney College have gathered in numbers outside the school gates on the hilltop to cheer on and hand out refreshments to the tired runners.

In the 7km stretch from the top of Botha’s Hill, there is a steep but sharp descent known as Alverstone.

Shortly after that, runners encounter the Wall of Honour on the right hand side of the road, overlooking the Valley of 1 000 Hills. This wall was created as a permanent landmark to honour the achievements of runners who have completed the epic journey between the two cities.

A few 100m past this is the halfway mark, which is immediately followed by the fourth “Big Five” hill, Inchanga. Here runners are confronted by a tough 2.5km hill that rises to 150m in altitude.

At 870m, Umlaas Road is the highest point on the route and situated about 19km from Pietermaritzburg. This point is largely unnoticed by most runners, as it is not a recognisable hill. The only landmark here is a concrete water tower.

The ultimate hill is next, Polly Shorts. It lies in wait 80km away from Durban and is often the make-or-break point for even the top contenders. The climb is 1.8km in length with the peak at an altitude of 737m.

Founded by First World War veteran Vic Clapham, the Comrades Marathon is one of the greatest ultra marathons in the world. It is one of South Africa’s enchanting national treasures and attracts thousands of runners, spectators and television viewers every year.

Runners of all talents and ages come together on the day in a gruelling display of mind and body strength.