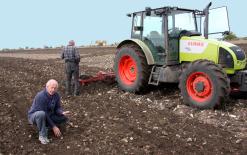 The know-how and experience of South African farmers is becoming an important and sought after commodity in itself.

Increasingly these farmers are being approached by foreign governments wishing to tap into their agricultural skills and years of experience.

The latest exchange has seen five farmers moving to Georgia in Eastern Europe over the course of 2011, while almost 800 South African farmers have already moved or extended their farms into Mozambique.

Further afield, the governments of Congo-Brazzaville and Zambia have also started making overtures to both South African and Zimbabwean farmers, as these countries have plans to get grand scale food production off the ground.

The impoverished former Soviet state entered into an agreement with South Africa in 2010, and hopes to see many more South African farmers settling there in the near future.

The exchange has taken place at the initial invitation of the Georgian government through its Minister of Diaspora, Papuna Davitaia,with the collaboration of the Transvaal Agricultural Union South Africa (Tau SA).

Georgia plans to bring its agricultural sector back up to global commercial standards after years of communist rule.

The country has one of the oldest winemaking histories in the world but has been struggling for the last 21 years, since becoming independent, to lift its agricultural sector from the current subsistence farming to commercial farming levels. The main export products are wine and hazelnuts.

The South African farmers will bring their years of experience in cattle farming and the growing of cereal crops on large tracts of land to Georgia.

“The state owns agricultural land in each of the 10 provinces and wishes to sell such land to commercial farmers,” confirms Tau SA’s GM, Bennie van Zyl. He said about 80 000 hectares of state property is available, not all of it suitable for farming, but that private farms are also readily available.

In general, soil is much cheaper than in South Africa but Van Zyl predicts that once Georgia joins the European Union, as it hopes to do in the near future, the value of these water-rich farm properties will escalate considerably.

Already the first grain and maize cultivated by a South African have been harvested in Georgia. Sixty-seven-year-old Piet Kemp, who arrived in Georgia in March 2011, has harvested grain which was in the fields when he arrived, planted and harvested a crop of maize, and despite floods and hail, still managed a reasonable crop in the same year.

He has once more planted grain, which in these cold parts is sowed just before the first snow falls, and now awaits a good crop when spring arrives. In an interview on ABN Digital, Kemp said he plans to become a Georgian citizen in time.

“I just want to be a farmer and produce food,” he said.

However, life is not without challenges in this new country. While the climate near Tbilisi, the Georgian capital where Kemp farms, is surprisingly similar to what he is used to in the colder Highveld region of Mpumalanga province, the language and alphabet is certainly not. To overcome this, Kemp requires an interpreter constantly at his side and, while his work force is for the most enthusiastic and up to the task, the negative impact of socialism and communism on the country has been debilitating.

“The ability to be an entrepreneur has literally been destroyed during the 70 years under Soviet rule. It’s a poor, hurt country,” adds Van Zyl.

In an effort to fast-track the project, the Georgian government has also requested the services of an advisory committee of three South African agricultural experts to assist them for a period of between three months and one year with the project.

South Africans do not need a visa for Georgia. Van Zyl says in total about 25 South African farmers are in one way or another already involved in helping to develop the country, while many more have shown interest.

Surprisingly, Georgia also shares some past history with South Africa in the shape of Prince Niko Bagrationi, a Georgian aristocrat who so strongly associated with the Boers’ cause that he volunteered and fought against the British during the second Boer War (1899 – 1902).

On a recent visit to Georgia, a delegation of South African farmers was on hand to open a museum dedicated to Bagrationi and his many escapades.