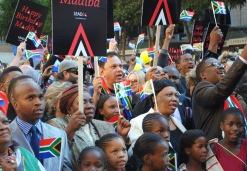 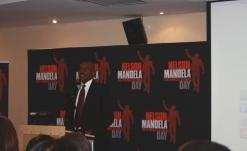 As the one-month countdown to International Mandela Day 2012 kicked off on Monday 18 June, the video of the special birthday song for former president Nelson Mandela was launched.

Mandela turns 94 on 18 July, and every year his birthday is celebrated around the world, with the date officially declared by the UN in 2009 as an internationally recognised commemorative date.

“The countdown has started – there is one month to go,” said social movement Lead SA’s Yusuf Abramjee, who spoke at the launch at the Nelson Mandela Foundation in Johannesburg.

Last year, Lead SA, the Department of Basic Education and the foundation garnered the support of South Africans to sing to Mandela on his big day. This year they decided to go bigger by encouraging the whole world to participate in the singing – which will take place simultaneously, at 8am South African time.

On 29 May hundreds of people, among them TV, radio and sports personalities, gathered in Sandton for the recording of the song. Also present were basic education minister Angie Motshekga; Nkosazana Dlamini-Zuma, the minister of home affairs; and Anitha Soni, trustee of the board of directors at Brand South Africa.

Lead SA, the department and the foundation, supported by the Shout Foundation, Proudly South African and Brand South Africa, partnered to get the world movement going to sing the song and engage in 67 minutes of community service.

“We are exploring the possibility of breaking a social media world record. We want to mobilise South Africans and the world to sing and pledge their 67 minutes,” said Abramjee.

South African Rugby has also pledged its support, saying that national team the Springboks, along with thousands of spectators who will be present at the test match against England in Port Elizabeth on Saturday 23 June, will also sing to Madiba.

Footballs fans will also be getting involved. The song will be sung ahead of matches scheduled on the day, as well as half-time on the following Saturday in Durban and Cape Town respectively, when local teams take on Manchester United FC.

Viewers of DStv will also be treated to the song as satellite operator MultiChoice pledged to play the recording on all its channels at 8am on the day.

“This is in the true spirit of doing it for our country and honouring Madiba,” said Abramjee, thanking Imitiaz Patel, CEO of Multichoice.

Goodwill and support for Mandela

Over 100 community radio stations will play the song, while the Caxton and Independent newspaper groups will lend their support by promoting the movement in the lead up to the day.

Lead SA and its partners have further invited companies, universities, NGOs, government departments and individuals to join in, while also calling on foreign media to put aside the differences and support the initiative.

They have also called on representatives of foreign organisations in South Africa to assist in getting 67+ countries to join the initiative and sing happy birthday at 8am, their local times, and also to get their people to do 67 minutes of community service.

Mandela’s grandson Luvuyo Mandela said he and his family will hand out blankets and plant trees as part of their 67 minutes project. South African news presenter Leanne Manas also assured her 67 minutes of goodwill and encouraged others to do the same.

CEO of the Nelson Mandela Centre of Memory Achmat Dangor said no government can meet all the challenges by itself and the citizens of South Africa need to be active in making a difference.

“When civil society realises its strength, it can make a difference,” added singer Kabelo, who is part of Shout.

Speaking at the launch, Miller Matola, CEO of Brand South Africa, one of the biggest partners of the initiative, said that in the spirit of Ubuntu, the people in his organisation are ready to roll up their sleeves and do their part for Mandela.

The primary objective of the 94+ Schools Project for Madiba is to celebrate Mandela’s 94th birthday by giving hope and dignity to children at at least 94 schools across South Africa, by improving school infrastructure.

The campaign to alleviate the infrastructure backlog in primary schools in poor communities across the country will make a significant contribution to fulfilling Mandela’s dream for every child in South Africa to be educated.

“Let’s make his 94th birthday the magic of legends and an enduring memory,” said Abramjee.

“We want to give him his best birthday present ever – the love of the world.”