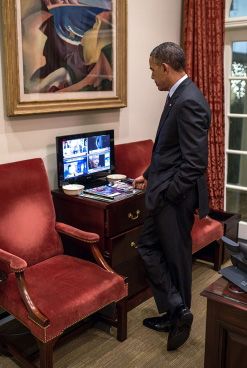 US President Barack Obama watches news coverage of the passing of Nelson Mandela in the Outer Oval Office on Thursday 5 December 2013. Obama and his wife Michelle, as well as former US presidents Jimmy Carter, Bill Clinton and George W Bush, will be among the global leaders attending the memorial service for Mandela on Tuesday 10 December.
(Official White House photo by Pete Souza)

Over 70 global leaders – including four US presidents – as well as royalty and international celebrities are heading to South Africa for the week of mourning for Nelson Mandela, which will include a massive memorial service on Tuesday and an official state funeral on Sunday.

Tomorrow, 10 December, over 80 000 people will gather at FNB Stadium in Johannesburg for the memorial service in honour of South Africa’s first democratically elected president. The stadium is where Mandela made his last major public appearance, at the final of the 2010 Fifa World Cup.

The service will be a final chance for grieving South Africans to unite in a mass celebration of Mandela’s life ahead of the smaller, more formal state funeral at his home village of Qunu in the Eastern Cape on 15 December.

While Tuesday’s memorial service will likely be one of the largest gatherings of global leaders in recent history, only a handful of dignitaries will attend Sunday’s state burial in Mandela’s ancestral home of Qunu in the Eastern Cape. “We’re trying to keep that to the family,” foreign ministry spokesperson Clayson Monyela told Talk Radio 702.

“The world literally is coming to South Africa, and the large number of high profile guests arriving is unprecedented,” Monyela said.

Minister in the Presidency Collins Chabane said international heads of state and royalty had started arriving in South Africa. Representatives from almost every global organisation will attend.

“I don’t think it has ever happened before. All organisations of the world.” Chabane said. “We also have princes and princesses, kings and queens coming.”

US President Barack Obama and his wife Michelle will be accompanied by three of his country’s former presidents: Jimmy Carter, George W Bush and Bill Clinton and their wives, as well as 26 congressmen.

Thirteen presidents from Africa and 15 from the rest of the world have confirmed attendance. Presidents David Cameron of the UK, François Hollande of France, Joachim Gauck of Germany, Enrique Pena of Mexico and Mahmud Abbas of Palestine will be at the memorial service, as will UN secretary-general Ban Ki-moon and Brazilian president Dilma Rousseff, who will lead a delegation made up of four of her country’s former presidents. Britain’s Prince Charles will represent his mother, Queen Elizabeth, at the funeral in Qunu.

African leaders who have confirmed are President Goodluck Jonathan of Nigeria, President Jakaya Kikwere of Tanzania, President Joseph Kabila of the DRC, President Hifikepunye Pohamba of Namibia, and President Macky Saul of Senegal.

Talk show queen Oprah Winfrey and singer-activist Bono, as well as British billionaire Richard Branson and musician Peter Gabriel are expected to be among the celebrity mourners at FNB Stadium.

‘A special place in the hearts of people’

“The fact that international leaders are making their way to South Africa at such short notice reflects the special place president Nelson Mandela holds in the hearts of people around the globe,” Chabane said.

“We are touched by the fact that many countries have declared periods of mourning, ordered that flags be flown at half-mast and draped or lit landmarks in the colours of the South African flag. We truly appreciate these gestures.”

South Africans have held permanent day and night vigils outside Mandela’s Johannesburg home since his death on the night of 5 December. Sunday marked the formal start of a week of official mourning for the country’s greatest statesman.

Before the funeral, Mandela’s body will lie in state for three days from Wednesday 11 December in the amphitheatre of the Union Buildings in Pretoria, where was sworn in as president in 1994.

Every morning for three days, his coffin will be carried through the streets of the capital in a funeral cortege, to give as many people as possible the chance to pay their final respects.

The official memorial service at FNB Stadium will start at 11am with gates opening to the public at 06h00.

“Entry to the stadium will be in a first come, first served basis,” Chabane said. No private vehicles will be given access to the stadium, with people urged to make use of public transport, such as the Gautrain, Metrorail and Rea Vaya. Mourners can also attend satellite services at Ellis Park, Orlando and Dobsonville stadiums, where the events at FNB Stadium will be broadcast on giant screens.