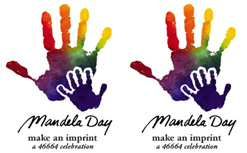 The Mandela Day campaign is urging
individuals to contribute to a making a
positive difference in the world.
(Image: Mandela Day) 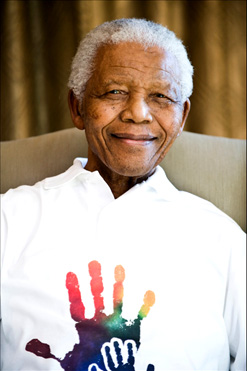 Preparations around the world are well underway for the celebration of former president Nelson Mandela’s 91st birthday on 18 July, now known as Mandela Day.

Mandela Day has been created as an annual celebration of Mandela’s life and is also a global call for people to realise and tap into the power they have to make a positive change in their communities and the world at large.

“We are humbled by the call for an annual Mandela Day in our honour,” said Mandela in a recorded video message. “Our struggle for freedom and justice was a collective effort. Mandela Day is no different, it is in your hands to create a better world for all who live in it.”

Madiba, as he is fondly known, will be honoured at a prestigious gala dinner in New York to be hosted by former US president Bill Clinton.

On 15 July Clinton, along with high profile musicians, actors, businessmen and socialites, will host the dinner at the Vanderbilt Hall in Grand Central Terminal in New York, three days before Mandela Day.

Hollywood actor Morgan Freeman will deliver a special birthday tribute to Mandela at the event, in addition to performances by Jonathan Butler and the Grammy-award winning Soweto Gospel Choir.

“It is a day dedicated to the idea that every individual has the power to change the world for the better … so as we celebrate the first Mandela Day, let us build a legacy worthy of bearing his name,” Brown said.

An exclusive auction by the famous auction house Christie’s will round up the evening.

All the money raised during the auction will be distributed to various projects of the Nelson Mandela Foundation, which promoted the preservation of Mandela’s legacy, as well as the 46664 Hiv/Aids campaign.

46664 was Mandela’s prison number on Robben Island, where he was incarcerated in 1964. The number is derived from him being prisoner 466 at the time, imprisoned in 1964.

The campaign was established in 2002, as a means of drawing attention to the plight of those infected and affected by Hiv/Aids.

To date, the 46664 campaign has hosted concerts around the world in a bid to raise funds and awareness of the impact of the scourge of Hiv/Aids in Africa.

A music festival in celebration of Mandela Day will take place at Radio City in New York, featuring South African and international stars on the line-up.

Initially billed to take place at Madison Square Garden, the event was moved to its new venue to accommodate the expected large number of music lovers.

From South Africa, the renowned Yvonne Chaka Chaka will perform alongside Thandiswa Mazwai, Emmanuel Jal, Freshlyground, Loyiso, Vusi Mahlasela and contemporary singer Chris Chameleon.
“We are so grateful to Madison Square Garden for making their iconic Radio City Music Hall available to us,” said Tim Massey International Director of 46664 in a statement.

“We can think of no better home for the launch of Mandela Day than the venue that has a long history of hosting events that give back to the community.”

In a rare appearance, France’s first lady Carla Bruni-Sarkozy will be perfoming at the concert, as well as Italy’s Zucchero, who is also a 46664 ambassador artist.

Not to be outdone, South Africa will also be hosting its national Mandela Day concert at the Mary Fitzgerald Square in Newtown, Johannesburg.

Celebrations will take place with the theme, Working together for the common good of our nation.

Traditional Venda dancers Taliphani will also give the event a traditional African flavour on the day.

The former South African president has been involved in human right activism for the past 67 years of his life.

To celebrate this milestone, South Africans have been asked by the organisers of Mandela Day, to donate 67 minutes of their time on Madiba’s birthday to be actively involved in a community based project on the day.

Speaking of the 67 minutes campaign, Mandela said in a recorded message, “It is our hope that people will dedicate their time and effort to improve the conditions within their own communities. We thank you for participating in Mandela Day.”

Activities across South Africa’s nine provinces will include screenings of Mandela documentaries, lectures, boxing tournaments – Mandela was an avid boxer in his youth – community clean ups and blood donation drives.

The Nelson Mandela Foundation will mark the day by hosting a xenophobia dialogue through its Centre of Memory and Dialogue.

South African president Jacob Zuma has also put his weight behind the campaign.

“We can best honour our icon, Madiba, through attempting in our own small ways to do what he would be proud of. Nothing would please him more than to see all South Africans, black and white, active in the service of humanity,” said Zuma, in a statement released by the presidency.

The president will be marking Mandela Day by visiting Madiba earlier in the day to personally wish him happy birthday.

Zuma will then proceed to Ivory Park, a poor community north of Johannesburg, to spend the day with the elderly at a special community outreach party.

Food hampers and other gifts will be handed out to the special guests at the event to be graced by both community leaders and government officials.