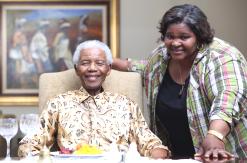 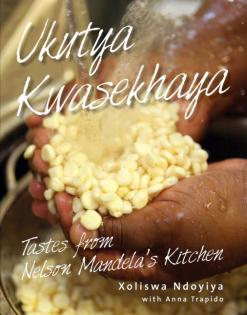 Over 60 recipes are available in the book,
and Ndoyiya says they can all be made
with ingredients found in any average
kitchen.
(Image: Real African Publishers)

The life of Nelson Mandela has been recorded in numerous books – one of the most comprehensive is his autobiography Long Walk to Freedom.

Now, the latest Mandela book offers an insight of a different kind – that of his culinary preferences.

The book is published by Real African Publishers, and contains more than 60 recipes made for Mandela and his family in the 20 years Ndoyiya, known affectionately as Sis’ Xoli, has been his chef.

With full colour photographs, Ukutya Kwasekhaya (isiXhosa, meaning “home food”) captures the simple tastes of traditional dishes that Mandela enjoys at home and on his travels.

“Madiba is happiest with traditional food,” said Ndoyiya. “If you do not give it to him for a few days he will ask, ‘What’s wrong? Why are you not feeding me well?’”

The book was co-written by food writer, radio and television broadcaster Anna Trapido, with photography by former The Star picture editor Debbie Yazbek.

It started with a dream

While researching Mandela’s eating habits for her cookbook Hunger for Freedom, Trapido asked Ndoyiya for some recipes.

“I told her I cannot give her all the recipes because I have a dream to one day write my own cookbook,” said Ndoyiya.

“It took so long because I am a full-time cook and I had to take my time and respect the time of the people helping,” said Ndoyiya.

According to the author, the Nobel laureate was happy about her idea of putting his gastronomic habits into a book. “He said I must just carry on and not stop,” she said.

Like her renowned employer, Ndoyiya is an Eastern Cape native who grew up in Mlungisi township in Queenstown. After school she moved to Johannesburg in 1988, she established herself as a chef, eventually taking up a position at the Jewish Old Age Home in Troyeville in the city’s CBD.

In 1992, Ndoyiya was introduced to Mandela when he was looking for a personal chef.

“Madiba said [to Ndoyiya], ‘I believe that you are a great cook, but can you cook our food?’ I replied that I could cook ukutya kwasekhaya and that was that,” she said.

Ndoyiya said the book has been a long time coming, and that she’s wanted to publish a cookbook as a way to show her family, especially her children, what she has accomplished in the years that she’s been away from them.

She has dedicated the book to her mother and sister, both of whom helped raise her children.

Ndoyiya used the process of writing the book to explore the dishes she rarely cooked for the Mandela family.

Her intention was to share her recipes with everyone and show the world the various kinds of meals that are prepared in a real South African kitchen.

Simple dishes fit for a president

Ndoyiya’s success in the kitchen lies in the simplicity of her dishes as all the ingredients, she said, can be found in the average kitchen cupboard.

“I am not ashamed to say that I use stock cubes, Aromat and margarine, because that is what tastes good and feels right to me. If I hide the fact that I use them I am removing my secret tricks from you.”

And though Mandela is one of the most famous men in the world, his culinary tastes are as simple as any other person. Ndoyiya said he is not fussy and appreciates every meal she cooks for him.

“He does not ask for specific food; he eats anything I put in front of him.”

She spoke of the reasons she has cooked for the former president for so long, saying that loyalty and the love for what she does has kept her in Madiba’s kitchen for two decades.

She also implied that her job was made easier by Mandela’s gracious nature as, “he is just like a father and makes you feel at home.”

Ndoyiya is grateful for having served and contributed to Mandela’s well-being, she said, as this is an opportunity most people would like to have.

Real African Publishers spokesperson Angela McClelland said that the cookbook will be the first of its kind published by the company, which usually focuses on cultural and political genres.

It was the Nelson Mandela Centre of Memory that approached Real African Publishers with the idea of publishing Ndoyiya’s book.

McClelland said there are plans to distribute the book internationally in February.