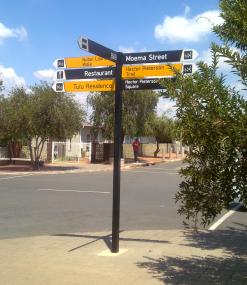 The corner of Vilakazi and Ngakane
streets in Orlando West, Soweto, where
Nelson Mandela’s old house is situated,
is a popular tourist attraction. 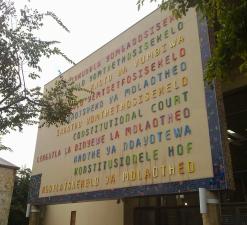 The Constitutional Courst is the highest
court in the land on matters relating to the
Constitution, but was formerly a place
notorious for the disregard of human rights.
(Images: Janine Erasmus)

The latest Brand South Africa media tour sees a group of journalists from the Middle Eastern region visiting the country.

The aim of these media tours is to expose the international press to South Africa’s business environment, as well as its regulatory and policy systems, and to boost positive press coverage abroad.

This is especially important in nations where Brand South Africa has no country manager.

With reporting from the United Arab Emirates (UAE) appearing in publications across the Gulf and well into India, the media there will gain a greater overall understanding of how South African business works and how it has developed.

The tour will emphasise South Africa’s progress in the sectors of energy, finance and mining; give journalists a glimpse into the country’s diversity of arts, culture and heritage; and inform them of South Africa’s well-established Muslim community and the way in which they are accommodated, including specialised Islamic business practices.

The media tour follows a state visit by President Jacob Zuma to the UAE in November 2011. It is hoped that this strategy will help to facilitate business partnerships and investment with entities from the UAE and other Gulf states.

At a dinner to welcome the group to South Africa, Brand South Africa CEO Miller Matola said that South Africa has a lot to offer, and there is great potential for business between the country and the UAE.

“South Africa is at the centre of major shifts in the globe,” Matola said. “The country is a serious and relevant socio economic and political player globally.”

Agro processing, energy, skills and technology have been identified as some of the major sectors where South Africa and UAE could form partnerships.

“We believe there is more scope for investment and to work together,” said Matola.

“I am looking for a reason to visit South Africa that is more than Nelson Mandela,” said Syrian journalist Bahaa Alawam, reporting for Sharjah-based Al Khaleej, the UAE’s top Arabic daily and one that is read by influential people such as government officials and decision-makers in business.

He explained that his first thought about South Africa was of its former president and Nobel Peace laureate, now 93 years old and long retired from public life.

“Then I did some more reading about your history, politics, economy and languages,” said Alawam, “and I realised that Nelson Mandela was not fighting alone for freedom, but that there were many people in the revolution.”

He said that he didn’t know this until just before his trip, but was now keen to know more about the various reasons people visit South Africa.

The country’s strong points for leisure tourists are its magnificent wildlife, spectacular landscapes, fascinating heritage, general friendliness of its citizens, and proven ability to host major international events such as the 2010 Fifa World Cup, the COP17 climate change summit, and many others.

Gulf News reporter Mahmood Saberi said he worked with a number of South Africans who primed him for his tour to the country.

“They all raved about South Africa and made me really look forward to coming here.”

For the group of five, it was their first visit to South Africa and each of them showed a keen interest in the country and its history, and said they were excited to be here.

A quick tour of history

However, the tour started off on a very Mandela-centric note, with a visit to Liliesleaf Farm in Rivonia north of Johannesburg. This heritage site was previously an African National Congress hideout and the place where Mandela, posing as a gardener, eluded the authorities until a raid in 1963 and subsequent arrests led to the infamous Rivonia Treason Trial.

Afterwards the journalists headed for Soweto and the historic Mandela House, where they were treated to a brief summary of Mandela’s life after he arrived in Johannesburg in the 1940s.

They were guided around the little house, built in 1945, where Mandela and his family lived amid unrest and fear in the township. Mandela went underground in 1961 but the rest of the family stayed on until they too were sent away.

After Mandela’s release the family moved back into number 8115 Vilakazi Street, Orlando West.

The historic suburb of Fordsburg was next on the itinerary. This area of downtown Johannesburg was originally set up for workers on the nearby gold mines but eventually came to house Johannesburg’s Indian and Muslim communities, as well as coloured, Chinese and Jewish people. This gave the suburb the multicultural sparkle for which it’s known today.

One of Fordsburg’s well-known spots is the Delhi Palace, where up-and-coming lawyers Nelson Mandela and Oliver Tambo ate in the 1950s.

The Fordsburg community eventually fell victim to forced removals in the 1970s, when many Indian families were transferred to Lenasia, about 30km away.

The journalists rounded off their first day’s sightseeing with a visit to the Constitutional Court, where the doors are never locked and the public may freely enter the courtroom, even while it’s in session.

Standing around the ever-burning flame of democracy, the group learned more about the history of the site. For much of its life it was a military outpost and prison, known as the Old Fort prison complex, a notorious institution where political prisoners and common criminals, both men and women, were held under the harshest of conditions.