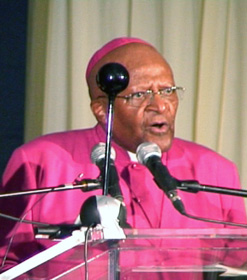 “This man is like a magician with a magic wand,” Archbishop emeritus Desmond Tutu said of Nelson Mandela. “He has turned us into a multicoloured rainbow people. South Africa was the world’s pariah and was transformed into a beautiful butterfly.” 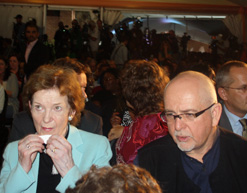 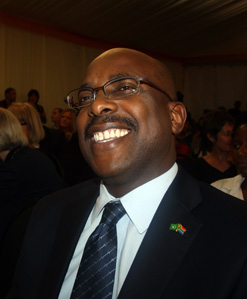 “In each of us is a Madiba. Let’s live like him – a legend, a leader and a healer,” said Brand South Africa chief executive Miller Matola.
(Images: Nokuphila Nyawo)

It is said that rain is a blessing. At the Nelson Mandela Centre of Memory on Monday 9 December, Johannesburg summer rain bucketed down as Madiba’s friend and fellow Nobel laureate Archbishop emeritus Desmond Tutu led a special memorial to the late statesman. Government officials, members of the Elders – a group of retired and independent global leaders brought together by Nelson Mandela to effect change in the world – wives and families, distinguished and international guests, and ordinary South Africans all converged in Houghton on Monday night to celebrate Mandela.

Tutu led the mourners on a journey through poignant stories, funny anecdotes and special memories of how one great man changed the course of South Africa’s future, and, in turn, the world’s. Tutu said: “We are all incredible people. We didn’t know each other, but this guy showed us the way.”

Representing the Elders at the event were British musician Peter Gabriel, and Mary Robinson, the first woman president of Ireland.

“What would have happened if Madiba had died in prison?” Tutu asked the crowd, which responded with shaking heads and loud mutterings. “The apartheid movement was left reeling in the gutters. Goodness triumphed in Madiba. We owe a debt to others in the land who opened the prison doors.

“We want to say to the international community, thank you for having supported us. Thank you for giving us an amazing person, a person who has set the world free of hate, anger and retribution.”

Mandela was a broken man in prison, Tutu said, but he was not consumed by hate. Instead, he was a stalwart of forgiveness. “The world expected a racial bloodbath, but instead, we saw the magnanimity, the generosity of the spirit of one man. Mandela forgives others; God gave us a gift in Mandela. Who else would go to Orania to have tea with the widow of the architect of apartheid?”

Tutu spoke with wonder of the 1995 Rugby World Cup, won by the Springboks at Ellis Park Stadium in Johannesburg. Mandela, he said, “wore the Springbok jersey, at Ellis Park, a place that is filled with predominantly Afrikaans people. This man is like a magician with a magic wand: he has turned us into a multicoloured rainbow people. South Africa was the world’s pariah and was transformed into a beautiful butterfly.”

The media coverage of Mandela’s death, Tutu said, had bowled him over. “I saw a front cover of the Rapport newspaper. The image was a white man consoling a black woman. Look how far our country has come.”

With his speech punctuated with chuckles and smiles, Tutu thanked the people close to Madiba. He paid homage to Zelda la Grange, Mandela’s personal assistant for many years. “Thank you for the amazing care you took of Tata Madiba. We salute you.”

He paid tribute to Madiba’s former wife Winnie Madikizela-Mandela, praising her contribution to the struggle against apartheid, and to his widow Graça Machel, for bringing joy to Mandela’s last years.

With the crowd rapt, Tutu recalled Madiba’s first night out of prison. The statesman had stayed in a home in the upmarket Cape Town suburb of Bishopscourt. In the morning, Mandela went to all the domestic and kitchen staff to thank them for their help. “Mandela was saying to people, we are not all VIPs, but we are all VSPs – very special people.”

Tutu had the audience on their feet, waving their hands and chanting: “We are all very special people.” They clapped joyfully, tears streaming down their faces.

Mandela’s lawyer and trusted confidant, George Bizos, a human rights lawyer who campaigned against apartheid, said the world was a different place. “He changed people.”

The chief executive of the Nelson Mandela Foundation, Sello Hatang, added: “We are doing this because Madiba would have wanted us to. We need to keep the legacy alive. Let’s live like Madiba.”

Brand South Africa chief executive Miller Matola also had a wish: “In each of us is a Madiba. Let’s live like him – a legend, a leader and a healer.”

Njabulo Ndebele, chairperson of the Nelson Mandela Foundation, spoke of spirit and memory: “Mandela’s spirit will always be felt here at the Centre of Memory.”

Primedia’s Yusuf Abramjee, the head of Crime Line, concluded by saying: “Thank you for teaching us love.”

And singer Jordan performed a newly composed a song, a personal tribute called Miss you Madiba, with the words, “The world will never be the same again.” The world agrees.