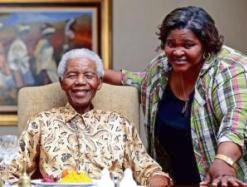 Xoliswa Ndoyiya, Nelson Mandela’s cook of 20 years, has compiled some of Madiba’s favourites in a recipe book. 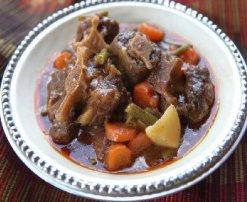 Mandela really prefers nothing more than oxtail stew, which according to Ndoyiya, is one of Mandela’s favourites. 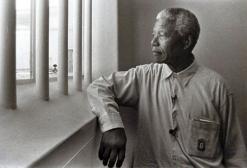 Mandela spent 26 of his birthdays in a prison cell where he ate porridge and soup for breakfast, boiled maize for lunch and porridge and soup again for supper. It is no wonder that when he was released from prison, a traditional home-cooked meal from Eastern Cape was what he longed for most.
(Images: Nelson Mandela Centre of Memory)

As the world prepares to honour Nelson Mandela on his 94th birthday, many wonder what meal would mean the most to the former statesman on this great day.

Xoliswa Ndoyiya was Nelson Mandela’s personal cook for 20 years; a career that began two years after the former statesman was released from prison in 1990 after serving 27 years for treason under the apartheid government.

Ndoyiya and Mandela’s paths crossed shortly after her husband was killed in the clashes between the African National Congress and Inkatha Freedom Party in the 1990s. Mandela had been travelling around the areas of Gauteng province that were affected by the violence and was introduced to Nodyiya.  Since he was looking for a chef, Mandela decided to hire her, marking the beginning of a long professional relationship between the two.

“When he married Graça (Machel) on his 80th birthday in 1998, that was a very special birthday for me,” she recalls.

“There were many people and a lot of food and cake.”

Ndoyiya was, however, not around for what was probably the most unnerving task involving Mandela’s culinary needs. In the midst of the chaos and excitement that had gripped members of his party, close friends and family on the day of his release, there was confusion as it dawned on organising the events of the day that no plan had been made for what his first meal outside of prison would be.

“We had no idea what Madiba liked to eat…,” Lavinia Crawforde-Browne, former personal assistant of Archbishop Emeritus Desmond Tutu told author Ann Trapido in the book Hunger for Freedom: The Story of Food in the Life of Nelson Mandela.

“…so we thought, well, chicken is the safest thing, and I rushed to the nearest 7-Eleven and bought up every chicken piece I could find and a crate of Coke, which turned out not to be enough and I had to go back.”

In her own released book, Ukutya Kwasekhaya: Tastes from Nelson Mandela’s Kitchen, Ndoyiya documents Mandela’s favourite recipes, along with his own food-related anecdotes, which gives the book more of a personal setting. He has a strong liking for traditional African food, despite having travelled widely as a statesman.

“We don’t just spoil him once a year only on his birthday, we try to make every day a special one for him,” says Ndoyiya, who wears her title of Mandela’s cook with pride and gratitude.

Making every day a Mandela birthday

For a man who spent most of his life fighting against the apartheid regime and putting the needs of his country before his own, retirement is a valued privilege.

Since his retirement from politics in 2004, Mandela enjoys a peaceful existence in his home village of Qunu in the Eastern Cape. He prefers to spend his birthday at home, in his living room, according to Ndoyiya.

It is often said that the way to a man’s heart is through his stomach – even Mandela is no exception to that rule. As chef and food writer Anna Trapido noted in her book, Hunger for Freedom: The Story of Food in the Life of Nelson Mandela, in prison Mandela would speak about freedom as he would speak about food.

The anti-apartheid hero spent 26 of his birthdays in a prison cell (mostly on Robben Island), where he ate porridge and soup for breakfast, boiled maize for lunch and porridge and soup again for supper. It is no wonder that when he was released from prison, a traditional home-cooked meal from Eastern Cape was what he longed for most.

The role of food in his life

Trapido’s book takes a different approach to Ndoyiya’s. It is an academic account of the role food has played throughout Mandela’s life, from his childhood and years in prison, to during and after his time as South Africa’s first black president.

“We all reveal our most elementary social, economic and emotional truths in the ways that we cook, eat and serve food,” says Trapido. “So why not ask those who changed the world what they were eating while they did it?”

In the book she unearths fascinating, humanising stories, and says one of the facets of Mandela’s life in prison was sympathetically revealed in the book through a letter Mandela wrote to Winnie Madikizela-Mandela, his wife at the time, from Robben Island on August 31 1970:

“How I long for amasi (traditional South African fermented milk), thick and sour! You know, darling, there is one respect in which I dwarf all my contemporaries or at least about which I can confidently claim to be second to none – a healthy appetite.”