Graca Machel, wife of Nelson Mandela and public service minister, Lindiwe Sisulu next to the clamshell that will house the very first Opus. Next to them are Makaziwe Mandela, daughter of Nelson; Ndaba Mandela, his grandson; and, Sello Hatang, CEO of the Nelson Mandela Foundation (Far left). 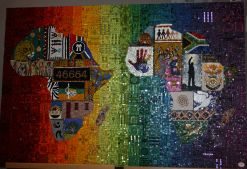 A mosaic picture of Africa depicting the life of Mandela was donated to the Foundation by Matchworld.
(Images: Ray Maota)

There are an almost countless number of books about South African statesman Nelson Mandela – Amazon alone lists 59 written by the man himself – but none will come close to being the definitive chronicle of his life than the Official Mandela Opus, due out in 2014.

At half a metre square and weighing 37 kilograms, the opus will be the ultimate work on South Africa’s first democratically elected president, documenting 95 years of his life and legacy from his birth in 1918.

Announced at an event at the new Nelson Mandela Centre of Memory in Johannesburg on 3 December 2013, the book will be edited by veteran author and journalist Ryland Fisher. It will include contributions from international luminaries such as Bill Gates, former US president Bill Clinton, Pope Francis and Richard Branson, as well as a personal account by President Jacob Zuma of his memories of the man fondly known as Madiba. The foreword will be written by Archbishop Emeritus Desmond Tutu.

“We recently opened the Nelson Mandela Centre of Memory and an opus of such detail and class will contribute to preserving former President Mandela’s legacy in a unique manner,” Sello Hatang, CEO of the Nelson Mandela Foundation, said at the announcement.

The Mandela Opus is a collaboration between publishing house Opus Media, marketing company Matchworld, and Africa Rising, a company founded by Madiba’s grandson, Ndaba Mandela, to promote a positive image of Africa through print and film.

“We are excited about the Mandela Opus, which is another way of taking Tata’s legacy to people all over the world,” the younger Mandela said. “There can never be enough ways of telling his story.”

Fisher has been at work on the mammoth project since April this year. “It has been a privilege and an honour for me to be part of this,” he said. “I have previously done a book on Nelson Mandela, but that pales in comparison to this one.

“This is the biggest tribute you can ever think of to pay to such a great South African. Part of the challenge we had was to ensure that the unique thing about the book is not only its size but its content.”

As work progressed, Fisher soon realised that the problem with chronicling Mandela’s life was choosing what not to include. He also had to go to great lengths to find the untold stories of people who had encounters with Madiba.

“For instance, the chapter on the day of his release is unique because we spoke to different people at different stages of the release. We spoke to someone who was in the house with Madiba before he came out, we spoke to the person who drove his car, and we spoke to another guy who walked around Grand Parade [in Cape Town] with a gun hidden under his coat, looking for people who might want to take Madiba out.”

Only 10 000 copies of the Opus will be available worldwide. In early 2014 a schools art competition will be launched, with pupils around the world being invited to design a cover for the book’s clamshell presentation case.

South African photojournalist Benny Gool, who documented Mandela’s public and private life for over three decades, is the official photographer for the opus, tasked with wading through thousands of images to make a selection.

“We ended up with close to 20 000 images, which we are slowly starting to sift through,” he said. “We are moving to a point where we will end up with a minimum of 2 000 images. From there on we will draw on whatever will end up in the book.”

The book will be filled out with the broader economic, political and historical situation in South Africa and the world at each of the key points in Madiba’s life, from his birth through his activism, imprisonment and release.

Poet Zolani Mkiva, Mandela’s traditional praise singer for 13 years, will ensure the historical accuracy of the book’s treatment of Madiba’s traditions and heritage.

“In a book like this, that will be going global, we want to mainstream the African heritage he comes from,” he said. “You will also realise that in terms of his early influences on leadership, his love for the community started from his grassroots. We didn’t want to leave that out.”

Karl Fowler, CEO of Opus Media, said Madiba’s story touches the hearts and minds of millions across the globe, so a massive work like the opus would make a valuable and unique contribution to his legacy and help educate and inspire people from all cultures.