Nelson Mandela’s humble little house in Orlando West, Soweto, now called the Mandela Family Museum, is an interesting stopover for those keen to imbibe a slice of authentic history on the world’s most famous former prisoner.

Nelson Mandela’s humble little house in Orlando West, Soweto, now called the Mandela Family Museum but usually simply referred to as the Mandela House, is an interesting stopover for those keen to imbibe a slice of authentic history on the world’s most famous former prisoner.

The museum, a house comprising four interleading rooms, contains an assortment of memorabilia, paintings and photographs of the Mandela family, as well as a collection of honorary doctorates bestowed on Mandela by universities and institutions around the world.

There’s also a boxing belt from Sugar Ray Leonard, a multicoloured cloak presented to the former president, and a row of his old boots.

The matchbox home, at 8115 Ngakane Street, was Mandela’s first house. He moved there in 1946 with Evelyn Ntoko Mase, his first wife. She moved out after their divorce in 1957.

When Mandela married Winnie Madikizela in 1958, she joined him at the Soweto home.

However, during the ensuing years, when his life as a freedom fighter was all- consuming, Mandela seldom stayed there. He was the “Black Pimpernel”, living a life on the run, until his arrest and imprisonment in 1962.

Madikizela-Mandela continued to live in the tiny house with her two daughters, Zeni and Zindzi, while Mandela was in jail. The house was petrol-bombed and set alight several times during this period. Visitors to the house can see the bullet holes and scorch marks on the walls.

Madikizela-Mandela moved to Brandfort in 1977, where she was under house arrest until 1986.

When he was released, Mandela refused to move to the more opulent home (also in Orlando West) that Madikizela-Mandela had built during his incarceration. He wanted only to return to the house of his memories.

“That night I returned with Winnie to No. 8115 in Orlando West. It was only then that I knew in my heart I had left prison. For me No. 8115 was the centre point of my world, the place marked with an X in my mental geography.’ – Nelson Mandela, Long Walk to Freedom

He stayed there for a mere 11 days, and was moved from one secret location to the next until he settled into his present Houghton residence.

Mandela separated from Madikizela-Mandela in 1992 and the couple divorced in 1996. Although her ex-husband handed the house to the Soweto Heritage Trust, Madikizela- Mandela refused to relinquish it. Instead, in 1997, she turned it into the Mandela Family Museum and set up a pub and restaurant across the road.

During the inauguration of the museum, where bottles of “Mandela garden soil” were sold, Madikizela-Mandela said: “A lot of history was made here. This is where the 1976 students’ uprising began, where the youth leadership met to change the face of South Africa.”

Certainly, the area is steeped in struggle history. Just around the corner from the Mandela Family Museum is the Hector Pieterson Memorial and, even closer to Mandela’s house, the spot where Pieterson actually fell.

Also close by, in Vilakazi Street, is Desmond Tutu’s house. Both Mandela and Tutu were Nobel Peace Prize winners.

In 1999, the house was declared a National Heritage Site. Now in the hands of the Soweto Heritage Trust, the house has been refurbished and renovated, reopening in March 2009. It comprises a visitors’ centre, as well as numerous exhibitions.

Renovations to the house were conducted by the Soweto Heritage Trust, in partnership with Standard Bank and Anglo American, who each contributed R2.25-million to the project.

The Soweto Heritage Trust says, “8115 Orlando West, Vilakazi Street, Soweto maintains a sense of dignity and memorial suited to its important place in history, while at the same time offering visitors access to the house, the lives and events linked to it, and a very special, meaningful and uniquely South African experience.” 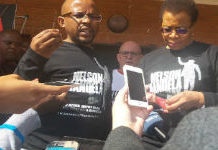