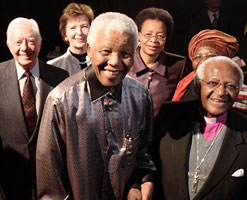 The Elders do not claim to know all the answers but they firmly believe that each and every individual can make a difference and create a positive change in society.
(Image: The Elders Organisation)

“The world has lost a visionary leader, a courageous voice for justice, and a clear moral compass. By showing us that the path to freedom and human dignity lies in love, wisdom and compassion for one another, Nelson Mandela stands as an inspiration to us all,” says Kofi Annan, the former secretary-general of the United Nations and the chairman of The Elders.

A stalwart, indomitable individual, Nelson Rolihlahla Mandela – Tata Madiba – was a man driven by courage, truth and an innate desire to do what was right. Armed with a fighting spirit and a tenacious vision he founded The Elders, “an independent group of global leaders who believe strongly in advocating peace and human rights”. Together they forged a bond with an aim “to act boldly, speak difficult truths and tackle taboos”.

British entrepreneur Richard Branson and musician Peter Gabriel initiated the idea of The Elders to Mandela, the world renowned anti-apartheid activist and former South African president. With the help of his wife, Graça Machel, and Archbishop Emeritus Desmond Tutu, The Elders were established and a conversation was started. The idea they discussed was a simple one: how could a small, dedicated group of independent elders help to resolve global problems and ease human suffering?

This international non-government organisation of Nobel laureates, public figures, elder statesmen, peace activists and human rights advocates, envelops “almost 1 000 years of collective experience” to work on solutions for seemingly overwhelming problems. Chaired by Annan, the collective works tirelessly to resolve global disputes and overcome obstacles. In warring regions charged with hostility, each elder strives to construct building blocks for peace and reconciliation, and, throughout the world, they promote equality for girls and women, as well as sustainable development.

“They are not bound by the interests of any nation, government or institution but represent an independent voice,” states The Elders website. “They are committed to promoting the shared interests of humanity, and the universal human rights we all share. They believe that in any conflict, it is important to listen to everyone – no matter how unpalatable or unpopular this may be.”

The Elders do not claim to know all the answers but they firmly believe that each and every individual can make a difference and create a positive change in society. At the group’s launch on Mandela’s 89th birthday, 18 July 2007, he called on The Elders to act as “a fiercely independent and robust force for good, tackling complex and intractable issues – especially those that are not popular”.

He expressed his hope that the group would “work to support courage where there is fear, foster agreement where there is conflict, and inspire hope where there is despair”. He added: “Using their collective experience, their moral courage and their ability to rise above the parochial concerns of nation, race and creed, they can help make our planet a more peaceful, healthy and equitable place to live… Let us call them Global Elders, not because of their age, but because of their individual and collective wisdom. This group derives its strength not from political, economic or military power, but from their independence and integrity.”

Mandela did not play an active role after founding The Elders, but he was an Honorary Elder and the inspiration for the group’s work. Tutu served as the chairman for six years before he stepped down in May 2013; he remains an Honorary Elder.

At the inauguration, an empty chair was on stage for Aung San Suu Kyi, the human rights activist who was a political prisoner in Myanmar at the time. Those who were present at the launch were Annan, Jimmy Carter, Machel, Mandela, Mary Robinson, Tutu, Muhammad Yunus and Li Zhaoxing. Members not present at the launch were Ela Bhatt, Gro Harlem Brundtland, Lakhdar Brahimi and Fernando Henrique Cardoso. Martti Ahtisaari joined The Elders in September 2009 and Hina Jilani and Ernesto Zedillo joined the group in July 2013.

Since 2007, The Elders have worked on peace-building efforts in Ivory Coast, Cyprus, Israel and Palestine, the Korean Peninsula, Myanmar, Sri Lanka, Sudan and South Sudan, and Zimbabwe. They have also worked to encourage inclusive and peaceful transitions in countries affected by change in the Middle East and North Africa. Their work and aims include:

● Ivory Coast: In May 2011, following months of post-election violence, Annan, Robinson and Tutu travelled to the country to encourage a process of national reconciliation and healing.

● Cyprus: The Elders have visited Cyprus several times, and in February 2011 launched a documentary about the search for the thousands of missing persons killed during inter-communal violence and conflict in the 1960s and 1970s. The film follows four local teenagers – two Greek Cypriots and two Turkish Cypriots – who join Tutu, Carter and Brahimi to learn more about the island’s painful past.

● Middle East: The Elders made their second visit to the Middle East in October 2010. They aim to promote “a just and secure peace for all” that embraces human rights principles under international law, and guarantees the right to live in equality, dignity and security to all Palestinians and Israelis.

● Equality for women and girls: The Elders call for an end to the use of religious and traditional practices to justify and entrench discrimination against women and girls.

● Sudan and South Sudan: The Elders support efforts to build the conditions for long-lasting peace, good governance and development.

● Zimbabwe: The Elders are actively engaged in supporting initiatives to address the humanitarian crisis in the southern African nation and efforts to build a stable, prosperous and secure future for its people.

● Myanmar: The Elders support efforts to achieve a peaceful transition to democracy in the country and the release of all political prisoners.

● Eliminating nuclear weapons: The Elders strongly support efforts to reduce and eventually eliminate all nuclear weapons worldwide. There are more than 20 000 nuclear weapons in the world that have the capacity to destroy life on Earth several times over.

In his 2007 speech at the founding, Mandela said: “I am also certain that that they will support courage where there is fear, foster agreement where there is conflict and inspire hope where there is despair. But I wish them well, and hope they succeed in bringing light to some of the darkness that afflicts our world, and new energy to areas where others have become weary because of the endless conflict.”

Machel, Mandela’s widow and the former first lady of Mozambique, said: “When Nelson Mandela brought The Elders together in 2007, he challenged us to reach out to those who most need our help, to give a voice to the voiceless.”

As a collective, The Elders have the ability and the power, the networks and the influence to make a difference. Mandela described their mission: “They can speak freely and boldly, working both publicly and behind the scenes. They will reach out to those who most need their help.”

With their founder now gone, The Elders will carry on in the spirit of Mandela, who once explained the African concept of ubuntu: “We are human only through the humanity of other human beings.” The word can be translated as “human kindness”.

A delegation of The Elders travelled to South Africa to honour the memory of Mandela after his death, saying:

Tutu: “God was so good to us in South Africa by giving us Nelson Mandela to be our president at a crucial moment in our history. He inspired us to walk the path of forgiveness and reconciliation and so South Africa did not go up in flames. Thank you God, for this wonderful gift, who became a moral colossus, a global icon of forgiveness and reconciliation. May he rest in peace and rise in glory.”

Ahtisaari, the former president of Finland, said: “The most impressive man of my generation has passed away. No one has influenced my life more than president Nelson Mandela. Anyone supporting the just struggle for democratic change in Southern Africa cannot have been untouched by president Mandela’s life.”

Bhatt, founder of India’ Self-Employed Women’s Association, said: “The world has lost a great leader. Madiba showed the people of the world that great nations are built with moral courage and collective strength, with justice and equal opportunity, with truth and reconciliation, with love and forgiveness, with vision and wisdom. He was indeed the Gandhi of South Africa. His spirit lives on in the people of South Africa and in the hearts of all who loved him.”

Brahimi, the former foreign minister of Algeria, said: “Men and women everywhere feel they have lost someone very close to them, a man they loved deeply and respected and admired profoundly. It was such a privilege to have known him, to have listened to him a number of times, to have participated, however modestly, in his gigantic achievement: the end of apartheid and the restoration of lasting peace and reconciliation in South Africa.”

Brundtland, the former prime minister of Norway and the deputy chairwoman of The Elders, said: “Six years after his release from prison, I had the great honour as Norway’s prime minister, to be the first foreign guest to visit Robben Island with Nelson Mandela and see the tiny cell in which he spent 18 of his 27 years in jail. It was an incredibly moving and unforgettable experience. He embodied the greatness of human dignity and restraint under terrible pressure.”

Carter, the former American president, said: “I am deeply saddened by the death of Nelson Mandela. The people of South Africa and human rights advocates around the world have lost a great leader. His passion for freedom and justice created new hope for generations of oppressed people worldwide, and because of him, South Africa is today one of the world’s leading democracies.”

Robinson, the former president of Ireland, said: “Nelson Mandela was a much-loved citizen of the world. His death leaves us bereft – it is felt by all of us as a personal loss. It was an honour, and also very humbling, to be invited by Mandela to join The Elders. We will strive to uphold the values of justice, of listening, and of mutual respect for others that he embodied.”

The Elders are Martti Ahtisaari, Kofi Annan (chairman), Ela Bhatt, Lakhdar Brahimi, Gro Harlem Brundtland (deputy chairwoman), Fernando Henrique Cardoso, Jimmy Carter, Hina Jilani, Graça Machel, Mary Robinson and Ernesto Zedillo. Desmond Tutu is an Honorary Elder. The Elders no longer hold public office and they are independent of any national government or other vested interest. As integrity is a hallmark of ethical leadership, these men and women have earned international trust, and built a reputation for inclusive, progressive authority.

“The Elders share a common commitment to peace and universal human rights, but they also bring with them a wealth of diverse expertise and experience:

• The peace makers, with decades of experience mediating and resolving conflicts around the world;

• The peace builders who have helped post-conflict societies to heal wounds and rebuild;

• The social revolutionaries who transformed their own countries – whether by reducing poverty, improving the status of women, or championing nonviolent struggle; and,

• The pioneering women who have governed their countries, led international institutions and spearheaded movements to empower women.

“An Elder is also a change maker – someone who can lead by example, creating positive social change and inspiring others to do the same,” states The Elders website.