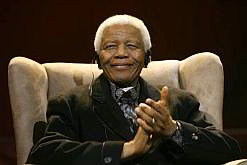 Prayers and messages wishing former
President Nelson Mandela a speedy
recovery continue to flood in from
around the world.
(Image: Nelson Mandela Foundation)

Churchgoers across the country joined thousands of people from all over the world wishing former South African President Nelson Mandela a quick recovery. Over the weekend churches around South Africa held vigils and said special prayers for the ailing Nobel Peace Prize laureate.

“Let us light a candle and pray for the health of former president uTata Nelson Mandela,” said Pastor Joseph Kubheka of the Methodist church in Johannesburg’s Braamfontein suburb, at the morning service on Sunday.

Many other churches in the country included similar prayers in their Sunday services. Over the past week, messages of support wishing Mandela a speedy recovery have poured in from all over the world.

The elder statesman was admitted to Milpark Hospital in Johannesburg on Wednesday 26 January, suffering with an acute respiratory infection. He was discharged two days later to recuperate at his Houghton, Johannesburg, home, where he continues to receive specialist care.

“Let us now unite in prayer and wish him a speedy recovery,” said African National Congress treasurer-general Mathews Phosa, who attended the prayer service organised by the ruling party and the Eastern Cape Council of Churches for Mandela at the Regent Hotel in East London on Sunday.

A candle of hope

Gauteng Premier Nomvula Mokonyane joined the congregation at Soweto’s famous Regina Mundi Catholic Church, praying for Mandela’s fast recuperation. As part of the Candle of Hope campaign, which encourages people to show their support for Mandela by lighting a candle of hope for his recovery, Mokonyane lit a candle bearing an image of the South African flag as prayers were said.

At the Faith Mission Church of Christ in Vosloosrus, east of Johannesburg, the congregation sang songs and clapped in celebration of the anti-apartheid icon. “We want to wish uTata well, we hope he recovers soon,” said Ntate Jacob Motlana, one of the elders in the church.

“There has been such a gloomy air surrounding our great hero’s hospitalisation, so by celebrating his life in our service today we are hoping to send some positive energy that will put uTata in good spirits. We hope he is not in pain and recovers soon.”

Well-wishers congregated at the Da Vinci Hotel in Sandton, northern Johannesburg, on 29 January to light candles and pray for Mandela. The candle lighting ceremony was also aimed at sending prayers and positive energy to the veteran.

“Light represents life and ignites warmth and good energy, so that is why we have lit candles,” said Gordan Dehl, who attended the ceremony. “We hope that as the candles burn they blow some positive energy that helps Mr Mandela heal soon.”

World leaders, including US President Barack Obama, have also sent their best wishes to Mandela.

Speaking at the African Union Summit in Addis Ababa, Ethiopia, on Sunday, Zuma also wished the statesman a full recovery.

“We wish him a long life and good health, as he continues to age with dignity and inspire all of us to strive to be better people each day.”