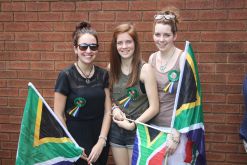 “Madiba said poverty was as much a crime as apartheid. We must do all we can to fight it, that’s why we volunteered to work in South Africa.” 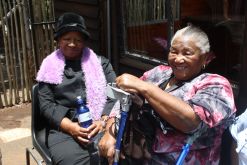 “Mandela helped rebuild our lives with pride and dignity. Like I tell my children, we must forgive but never forget,” says Henrietta Pitsi.

Madiba’s journey home to his village of Qunu, where he will be buried on Sunday, began at 1 Military Hospital in Pretoria on Wednesday 11 December 2013 as a glass-sided hearse carried his flag-draped coffin through the streets of the capital to the Union Buildings. There, the seat of government and the scene of his inauguration as the first president of a democratic South Africa, Nelson Mandela will lie in state for three days.

The slow 9-kilometre drive to the renamed Nelson Mandela Amphitheatre at the Union Buildings was shepherded through the streets by a motorised honour guard. A large crowd watched the procession pass, some waving flags and cheering, and others standing silently, heads bowed and tears in their eyes.

Thousands of citizens lined up for an opportunity to view the statesman, dressed in one of his trademark Madiba shirts, as he lay in state.

Twenty years into South Africa’s democracy this was Mandela’s dream made flesh. The people of the rainbow nation queued as they did in the historic elections of 1994, keeping their heads pointed to the sun and their feet moving.

Among them was Atteridgeville pensioner Henrietta Pitsi, with her husband and grandchild. She said she felt it was important that she be there to say goodbye to Mandela, and thank you. Dabbing at rheumy eyes she said the man who had given her back her dignity was owed as much time as it would take for the line to wind its way towards the security checkpoints closer to the Union Buildings.

Pitsi’s children returned from exile in Tanzania when Mandela was released from prison in 1990. Today they are influential diplomats, businessmen and soldiers in the country of their birth. Mandela made their lives possible, she said. “Mandela showed us we had the right to want and have in our own country. He enlightened us, he made it possible for me to send my children to Cambridge, to international schools. Their lives are better thanks to Madiba.”

Leaning on her grandchild’s shoulder, Pitsi said she had once queued for five hours to get into Wimbledon. If she could do that, then she could stand as long as she needed to say goodbye to Mandela. “Every day I tell them how they came to be free,” she says of her grandchildren. “They know we are all looking to them to ensure that Madiba’s sacrifices were not in vain.”

Further back in the queue Penny Abboo watched her two spirited toddlers wander among the crowd. While they were far too young to understand why they were there, she said, “one day I will be able to tell them they were a part of history”.

“I was clearing out my father’s house after he died and I found his dompas,” Abboo said, referring to the apartheid pass book black South Africans once had to carry in urban areas. She was never politically active, she said, and even being among the first group of black students allowed into universities formerly reserved for whites did not make her feel she was part of history. “It was finding that document that brought it home to me how much the country had changed.

“I looked critically at my father’s generation and saw all these brilliant people who were denied opportunity because of the colour of their skin. In one generation we changed, we all became true citizens of this country, and that was thanks to Mandela.”

“He has finally escaped the grip of illness,” one of them said in a distinct British accent. “He can go home now he has done all we can expect of one man.

“Mandela would have been so proud to see South Africa forget what divides them.” She was part of a group of foreign students volunteering in KwaZulu-Natal, who drove through the night to be a part of the day’s events.

Fashionably dressed Lerato Moloi, in line with her niece and sister, smiled when she heard the foreign accents in the crowd. The whole world, she said, is mourning with South Africa. “We South Africans think he belonged just to us, but he gave a voice to people all over the world.”

Nelson Rolihlahla Mandela will lie in state for three days, giving South Africans a chance to view his body and say goodbye. The country has never staged an event like this before. As the crowd inched closer to the Union Buildings, Mandela taught them another lesson: how to grieve as a united nation.