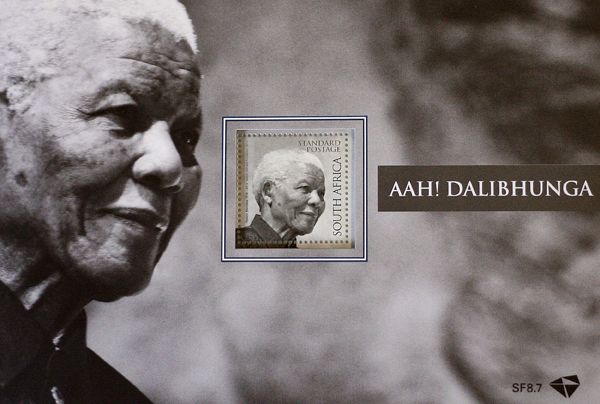 The South African Post Office and the Nelson Mandela Foundation have launched a special stamp to commemorate the life and legacy of the late Nelson Mandela.

While this is not the first stamp issue featuring Mandela, it is the first to be issued since he passed away on 5 December.

It was released on Tuesday, 11 February – exactly 24 years since Mandela’s release from Victor Verster Prison in Cape Town on 11 February 1990 – as part of a philatelic souvenir folder containing a high-quality miniature sheet depicting Mandela along with a brief summary of his life history.

Each souvenir folder costs R50 and is available at all post offices, as well as online at South Africa’s Virtual Post Office. A portion of the proceeds from the sale of the stamps will be donated to the Mandela Foundation.

This is the fourth stamp issued by the Post Office in honour of Mandela. The first came out in 1993, when Mandela won the Nobel Peace Prize, the second in the following year when he became the first black and democratically elected president of South Africa, and the third when he turned 90 in 2008.

Speaking at the launch of the stamp at the Nelson Mandela Centre of Memory in Johannesburg on Tuesday, Johan van Wyk, senior manager of philately at the South African Post Office, said the organisation was especially proud of this contribution to the history of Mandela.

“As far back as a year ago we were already working on a design,” Van Wyk said in a statement issued by Mandela Foundation. “That was premised on the fact that as much as we did not want him to die, we were aware of his mortality. So this design was coming from the perspective of a country in mourning – the focus was on grief.

“But in December, when he died, the mood in the country was that of a nation wanting to celebrate his life and legacy – yes, we were sorry for his passing, but we wanted to focus on his contribution. And in one weekend, the design changed completely.

“We are very proud of our efforts,” Van Wyk said. “We see our stamps as the smallest ambassadors for the country, but this one means more than that. It represents our contribution to his life and legacy, and through us issuing that stamp, we became a part of history.”

Getty Simelane, a director at the South African Post Office, said the issue of the stamp “has made it possible for many people the world over to share in memories of Madiba. We believe that Madiba, the most passionate democrat the world has ever seen, would approve.”