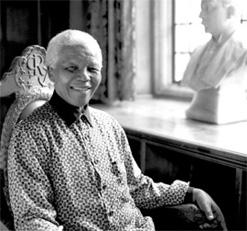 Nelson Mandela photographed at Rhodes House, the base for Rhodes scholars at Oxford University in the UK, in July 2003. In the background is a bust of colonialist Cecil John Rhodes. 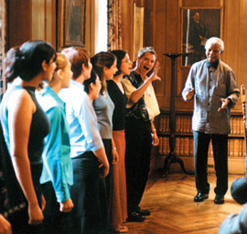 International Rhodes scholars at Oxford University, who had spent weeks learning to sing in Xhosa, perform for Mandela at a dinner in honour of the Mandela Rhodes Foundation at Rhodes House in July 2003. 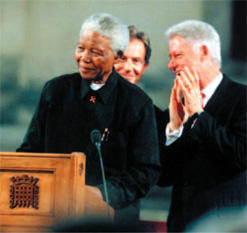 One hundred and ten years after colonialist and mining magnate Cecil John Rhodes bequeathed his prestigious Rhodes Scholarship to promising future leaders of British colonies, the Nelson Mandela Rhodes Foundation is celebrating 10 years of giving the same chance of advancement to talented young people from across Africa.

The Mandela Rhodes scholarship was set up in 2003 on the centenary of Rhodes’s famous last will and testament, which bestowed what he called his “Colonial Scholarships” for “the education of young Colonists at one of the Universities in the United Kingdom” who exhibit “moral force of character and of instincts to lead”.

In February 2002 Lord Waldegrave, the chairman of the trust that administers the Rhodes Scholarship, announced that the trust would bequeath £10 million, over 10 years, establish the new Mandela Rhodes Foundation.

Over the past 10 years, the Mandela Rhodes Scholarship has provided full funding to graduate African students for up to two years of postgraduate study – honours or masters degrees – at South African tertiary institutions. The scholarship pays for tuition, accommodation, meals, and book and travel allowances.

“It was in South Africa that Cecil John Rhodes, that great entrepreneur, made most of the money which he left in legacy for scholars from across the world to benefit from for the past hundred years,” Mandela said in a speech at the launch of the Mandela Rhodes Foundation in London in July 2003.

“It speaks of a growing sense of global responsibility that in this second century of its operations the Rhodes Trust finds it appropriate to redirect some of its attention and resources back to the origin of that wealth.

“We can only imagine how Rhodes himself would have identified with this decision to develop human capacity in modern-day South Africa, enabling that country to continue being a competitive presence in the world as it was in those fields within which he operated during his times.”

When the Rhodes scholarship was established in 1903 it was unique in that it aimed to benefit young men – women were included in 1977 – from British colonies or former colonies such as the United States. Rhodes specifically stated that it was open to all races and religions, something almost unheard of at the time. “No student shall be qualified or disqualified for election to a Scholarship on account of his race or religious opinions,” Rhodes wrote in his will.

While academic achievement was important, Rhodes wanted his scholarship to benefit not just eggheads but also future leaders and businesspeople. Dismissing academics as unworldly – “college authorities live secluded from the world and so are like children” – Rhodes specified that his scholarship students should have broader, more rounded attributes:

“My desire being that the students who shall be elected to the Scholarships shall not be merely bookworms, I direct that in the election of a student to a Scholarship regard shall be had to:

(i) his literary and scholastic attainments;
(ii) his fondness of and success in manly outdoor sports such as cricket, football and the like;
(iii) his qualities of manhood – truth, courage, devotion to duty, sympathy for the protection of the weak, kindliness, unselfishness and fellowship, and
(iv) his exhibition during his school days of moral force of character and of instincts to lead and to take an interest in his schoolmates, for those latter attributes will be likely in after-life to guide him to esteem the performance of public duty as his highest aim.”

Over the past 110 years, the Rhodes Scholarship has become recognised as the “world’s most prestigious scholarship” by major publications such as Time, the Yale University Press and the Associated Press.

In line with of Rhodes’ original intentions, the Mandela Rhodes Scholarships are designed to be much more than a bursary scheme. They give young Africans with academic prowess and leadership potential an educational opportunity unique on the continent.

In addition to the funds, scholars get individualised mentoring programmes, customised leadership courses, structured indabas with fellow Mandela Rhodes Scholars cutting across geography and academic disciplines, and the chance to mentor future scholars.

“The central purpose of the Mandela Rhodes Foundation is to build exceptional leadership capacity in Africa,” Mandela said on the second anniversary of the scholarships.

“The bringing together of these two names represents a symbolic moment in the closing of the historic circle; drawing together the legacies of reconciliation and leadership and those of entrepreneurship and education.”

As well as enjoying the prestige of the title “Mandela Rhodes Scholar”, the scholars are schooled in the principles of leadership underpinning the Mandela Rhodes Foundation and its programmes. They become part of a wide-ranging network of young Africans of excellence who are expected to play leadership roles in their societies as their careers progress.

“The Mandela Rhodes Scholarship has not only given me a top-notch education, and introduced me to an amazing community, but it has helped me to better understand and appreciate my life,” says Pie-Pacifique Kabalira-Uwase, a refugee from Rwanda who is now an account executive and motivational speaker.

“Young people understand what Mandela has started, and will carry it forward. In my lifetime, Africa will claim its place in the world.”