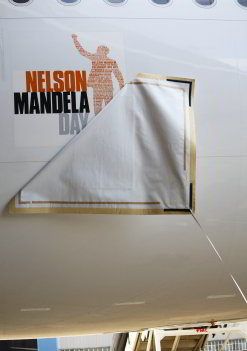 The Airbus A330-200 is the first of the
58 aircraft in SAA’s fleet that will carry
the Mandela Day logo. 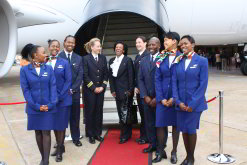 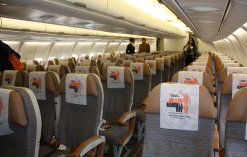 Inside, each seat has a branded headrest
cover, and various audio-visual material
available in-flight will ensure the spread
of the campaign’s message.
(Images: Michelle Oberholster)

South African Airways (SAA) has launched its 2011 Mandela Day campaign with the unveiling of the first of its fleet of specially branded aircraft that will carry the initiative’s logo, and message, around the world.

Viewed as a symbol of faith in the human spirit, the Mandela Day logo, currently seen on SAA’s brand new Airbus A330-200, will soon adorn the national carrier’s entire fleet of 58 aircraft.

The 222-seater – 186 economy and 36 business class berths – arrived in February 2011 and is one of six ordered from commercial aircraft sales and leasing company Aircastle Limited.

A two-engined craft, it will replace the more fuel-hungry four-engined A340-200. SAA will take delivery of the remaining five before the end of 2011.

Changing the world a step at a time

The logo, which marks the UN-proclaimed International Mandela Day, features a silhouette of the raised-fist statue of the former president that stands outside the gates of the Drakenstein Correctional Centre in Paarl, Western Cape province.

Nelson Mandela Foundation CEO Achmat Dangor said that the focus of this year’s campaign was to provide schools with libraries and ensure that children have school books. In this, he said, the foundation is working with NGOs such as Breadline Africa, which converts old shipping containers into useful resources such as classrooms, soup kitchens and daycare centres.

On the 67 minutes of community service asked of those taking part in the campaign, Dangor said, “We don’t expect big changes overnight, but if we can change the world one step at a time, we’ll make a difference.”

The event will be marked by various activities all around the country, driven by organisations and individuals alike.

During the campaign, SAA passengers will be able to watch and listen to multimedia material on the Mandela legacy.

A treat for children

For Mandela Day 2011, SAA plans to treat 93 children – one for each year of Mandela’s life – to their first flight. The statesman is well known for his enduring love of children, and this year’s youngsters have been selected from each of the country’s nine provinces.

They will fly to the foundation’s offices in Johannesburg, where they will be treated to a birthday party in Mandela’s honour, and receive school uniforms, backpacks, books and other special gifts including the children’s version of the Mandela autobiography Long Walk to Freedom.

“It’s only right that our generation picks up the baton and finishes the race that our parents and Mandela’s generation started,” said former activist and SAA chairperson Cheryl Carolus at the unveiling.

She said that SAA is committed to good corporate governance, and to ensuring a future for South Africa’s children and improving their quality of life.

“These causes are close to our hearts,” said Carolus. “And as corporate South Africa, we can accomplish so much more if we work together.”

Member of Parliament Buti Manamela agreed. “We want to mobilise not just Parliament, but all sectors of society, to work together. As a people we have the power.”

Manamela said that the older generation didn’t get things done by sitting back – they got involved.

“In those days there was no sense of entitlement, no expectation that the government must do it all,” he said. “The only way to accomplish change is to change the attitudes of selfishness that prevail today.”

The UN General Assembly passed a resolution in 2009 declaring 18 July, Mandela’s birthday, as an international day for people around the world to take action and inspire change.

Stella Anyangwe, representative of the UN office in South Africa, said that the global organisation had planned a number of activities in its missions in various countries.

These include public services such as planting trees and painting handrails in Central Park. At the UN’s New York headquarters in New York, a small Mandela exhibition is on display during July.

People can share their special Mandela moments or their 67 minutes of action on the UN’s official Mandela Day Facebook page.

Other international activities include the circulation of a message about the importance of Nelson Mandela Day in all six official UN languages; the screening of a 15-minute video and the film Invictus, followed by a discussion; UN radio programmes that focus on the event; and a dedicated Mandela Day website.