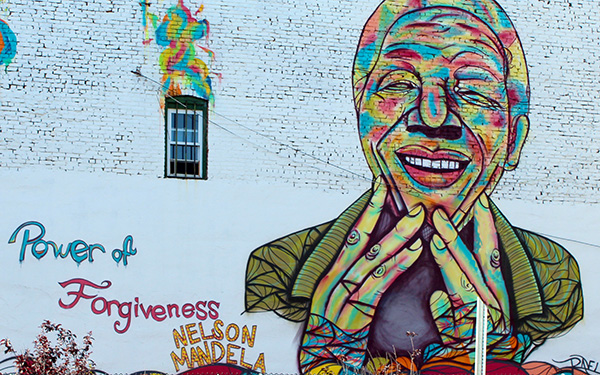 A mural in Jersey City in the US celebrates Nelson Mandela’s legacy. (Image: Wally Gobetz, Flickr)

As we approach the seventh Nelson Mandela International Day this July, we remember his remarkable life. Take this quiz to find out how much you know about the 95 years Madiba shared with us.

Click on the image you think is the correct answer.

When his son Makgatho died in 2005, what did Nelson Mandela announce to the world?

In what year was Nelson Mandela born?

Which of these quotes is NOT by Nelson Mandela?

How many years did Nelson Mandela spend imprisoned on Robben Island?

What does Rolihlahla, Nelson Mandela’s forename, mean in isiXhosa?

What was the final sentence of Nelson Mandela’s famous statement from the dock at the Rivonia Trial on 20 April 1964?

What was Nelson Mandela’s nickname when he was on the run from the apartheid police in the early 1960s?

From 1979 onwards, how many honorary degrees were bestowed on Nelson Mandela from universities across the world?

In what year did Nelson Mandela found the African National Congress Youth League?

How old was Nelson Mandela when he married Graça Machel, the widow of slain Mozambican president Samora Machel?