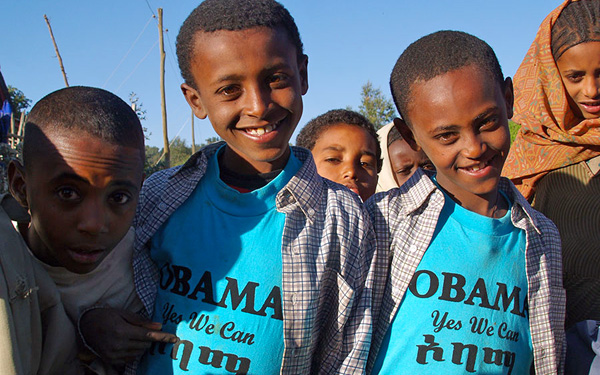 Young Ethiopians celebrate US President Barack Obama on their T-shirts. The US president is popular among young people in a number of African countries, particularly since his visit to the continent in 2009. (Image: Evgeni Zotov, Flickr)

Developing a new generation of young African leaders is a priority for US President Barack Obama. Since 2010 the Young African Leaders Initiative (Yali) of the country’s State Department, which deals with international relations, has supported promising new talent from the African continent. This month, Obama renamed Yali’s flagship Washington Fellowship for Young African Leaders after Nelson Mandela. The programme gives young African leaders leadership training at some of the US’s most successful, sought-after universities.

In June this years 500 gifted young Africans, the first class of the Mandela Washington Fellows, arrived in the US for six weeks of intensive executive leadership training, networking, and skills building. The programme culminated in a Presidential Summit in Washington, DC on 28 July, at which Obama announced its name change in honour of Mandela. According to the Yali website, the initiative gives young African leaders the skills and connections they need to advance their careers, and contribute to strengthening democratic institutions, spurring economic growth, and enhancing peace and security in Africa.

At the summit, Obama announced that the US would double the number of annual fellows in the programme to 1 000 by mid-2016. The president also met representatives of public-private partnerships as part of a strategy to bring more programmes to young leaders across Africa.

Mandela’s greatest gift, Obama said, was “his recognition that we are all bound together in ways that are invisible to the eye; that there is a oneness to humanity; that we achieve ourselves by sharing ourselves with others, and caring for those around us”.

The Huffington Post reported that Obama pointed to the inaugural class of young African fellows as inspiring examples of what the continent could achieve. The world’s security and prosperity depended on “a strong and prosperous and self-reliant Africa,” he said. He repeatedly spoke about the important role that women must play in Africa’s future. “One of the things we want to teach about Africa is how strong the women are and how we’ve got to empower women.”

The young leaders programme would be expanded through the creation of four regional leadership centres – in Ghana, Kenya, Senegal and South Africa – for more training on the continent. He also said it would offer more online tools, such as mentoring and courses, and more public-private partnerships to support young entrepreneurs who wanted to start businesses or non-profit organisations.

Participants in the young leaders programme singled out by Obama included a Nigerian woman who, after a friend died in childbirth, worked to distribute sterile kits for delivering babies, and a woman from Senegal who started an academy to fight trafficking of young girls. South African fellow Khanyi Magubane is a filmmaker, broadcaster and poet, and a former journalist for Media Club South Africa.

Discussing the fellowship during a visit to South Africa last year, Obama said that “we want to engage leaders and tomorrow’s leaders in figuring out how we can best work together”. A series of events had also been planned to strengthen US-African relations, including the first US-Africa Leaders’ Summit. The heads of 50 African nations will gather in Washington, DC from 4 to 6 August at the invitation of Obama for the unprecedented three-day summit.

With the theme “Investing in the Next Generation”, it will build on Obama’s 2013 trip to Africa and will highlight the United States’ commitment to Africa’s people, security and democratic development. In announcing the summit while in South Africa, Obama said female empowerment would be on the agenda. He wanted “to launch a new chapter in US-African relations”.

The fellowship is designed to give young leaders from sub-Saharan Africa leadership training at American universities, as well as the chance to meet government officials, entrepreneurs and members of American civil society.

According to USAid, Obama launched the Young African Leaders Initiative it “as a signature initiative that supports young African leaders as they work to spur growth and prosperity, strengthen democratic governance, and enhance peace and security across the continent”.