Mandela called for publicity to be given to HIV/Aids, saying that this was the only way for the disease to be recognised as a “normal illness, like TB, like cancer”.

By disclosing that his son Makgatho had died due to Aids-related factors, Nelson Mandela showed the way to South Africans struggling to break the stigma that still surrounded the disease in the country.

Mandela called for publicity to be given to HIV/Aids, saying that this was the only way for the disease to be recognised as a “normal illness, like TB, like cancer”.

He made the statement at a press conference held on the afternoon of his son’s death, surrounded by members of his family.

Mandela had spent the last months by his son’s bedside after he had been admitted to Linksfield Park Clinic in November 2004. Speculation about the cause of Makgatho’s illness was raised after his wife Zondi died of pnuemonia in 2003.

Makgatho Lewanika Mandela was a son from Mandela’s first marriage, to Evelyn Mase. He was a lawyer in the healthcare industry. He leaves behind four sons, Mandla, Ndaba, Mbuso and Andile.

Mandela’s announcement was described as “courageous”, as few prominent South Africans had publicly discussed the effect of HIV/Aids on their families. A notable exception was Inkatha Freedom Party leader Mangosuthu Buthelezi, who announced in 2004 that his son had died from the disease.

According to Department of Health figures, 5.6-million South Africans were estimated to be HIV-positive by the end of 2003.

The Treatment Action Campaign, an NGO that campaigned for greater access to HIV treatment in South Africa, expressed its condolences to the Mandela family.

In a statement, the organisation “saluted” the family’s “decision to disclose the cause of death in the national interest of raising awareness . and destigmatising Aids, during a time of great personal pain and loss.”

UNAids executive director Peter Piot called Mandela’s acknowledgement “a demonstration of the practical leadership that [he] gives to the international efforts to fight stigma and discrimination”.

The battle against HIV/Aids was central to Mandela’s mission in later years. The Nelson Mandela Children’s Fund, started in 1995 to address the needs of young people facing homelessness, joblessness and poverty, directs a large part of its resources where the country needs them most – to Aids orphans.

Mandela was also the driving force behind 46664, a worldwide campaign to raise global awareness about HIV/Aids and funds to fight the pandemic in Africa.

Speaking at the 14th International Aids Conference in Paris in 2003, Mandela said that a “tragedy of unprecedented proportions” was unfolding in Africa.

“Aids today in Africa is claiming more lives than the sum total of all wars, famines and floods and the ravages of such deadly diseases as malaria . We must act now for the sake of the world . Aids is no longer a disease, it is a human rights issue.”

The Mandelas presented a united front the memorial service for Makgatho, held at the Central Methodist Church in Johannesburg. Mandela sat flanked by his wife Graca and grandson Mandla, with his ex-wife Winnie Madikizela-Mandela and their daughters, Zinzi and Zenani, two rows away.

After the service, Makgatho’s body was flown to Mthatha in the Eastern Cape. His funeral took place in the Mandela family graveyard. 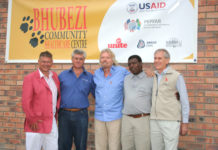 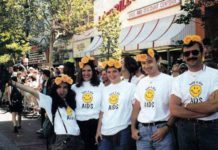