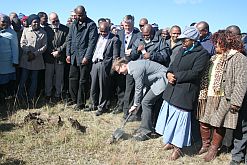 Scores turned out for the sod-turning event. 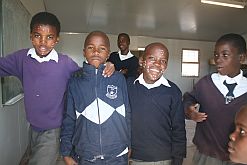 This is Mvezo’s generation that could
avoid leaving homes for high school
education in far-flung areas.
(Images: Bongani Nkosi)

All pupils from Mvezo village, former president Nelson Mandela’s birthplace, leave home after completing grade seven – usually at the tender age of 12. Because there is no secondary school in the area, they have to travel as far as Mthatha, least 80km away, to continue their education.

But that’s about to change. Mvezo will soon have its own high school, a state-of-the-art specialised public institution that’s to become the pride of the nation and reflect the legacy of the Mandela family.

Members of the rural, sparsely populated village turned out in numbers on 17 June 2011 to witness the sod-turning ceremony at the spot where the secondary school will be built.

In honour of South Africa’s most famous doyen of freedom, the first high school in Mvezo will be named the Mandela School of Science and Technology.

The school is the brainchild of Nelson Mandela’s grandson, Mandla Mandela, who became chief of the Mvezo Traditional Council in 2007. Since his appointment, Mandla has travelled extensively with colleagues from the Mvezo Development Trust to raise funds for the project.

“The community identified a need for a high school because we didn’t have one. We then formulated a fund-raising initiative,” said the young Mandela, who’s also a member of parliament.

The Mandela school will be able to accommodate up to 700 pupils. Mvezo children will be prioritised, but places will also be open to pupils from across the Eastern Cape and the rest of the country.

The high school will be built on the site which currently accommodates Inkwenkwezi, one of two primary schools in Mvezo. Once transformed, the hi-tech science and technology institute will boast a top-class boarding school and sophisticated facilities ranging from sports pitches to laboratories and tailor-made lecture rooms.

The rondavel, which was the original Inkwenkwezi teaching facility, will not be destroyed “to preserve it as a memory of where we come from”, said Mandla.

Inkwenkwezi was built by community members in 1995. The government only introduced makeshift classrooms at the school in 2006.

Siemens will provide funds for the construction of the Mandela high school, promising to equip it with some of the most advanced technology.

There are plans to include a sophisticated solar-energy generation scheme at the school so that it’s independent from the Eskom power grid.

The extent of Siemens’ financial contribution has not yet been revealed, with the group saying that the completion of the project remains the most critical aspect. “It’s not important how much it will cost.

“It’s important that we finish the project. It will happen; this is the commitment from Siemens,” said Peter Loescher, the company’s CEO.

It isn’t clear when construction will start, but Loescher said his team were ready and that design plans had been finalised.

The Mvezo Development Trust had already raised R3.2-million (US$470 000) with the help of the KwaZulu-Natal-based Thanda Foundation before Siemens came on board. The funds were accumulated in Sweden.

Lessons to be learnt

Minister of Basic Education Angie Motshekga said only the best educators would be selected for the Mandela school.

With a 58% matric pass achieved in 2010, the Eastern Cape’s public education sector is mostly affected by poor infrastructure, not the quality of teachers – according to Motshekga. “Backlogs in school infrastructure are daunting,” she said. “The initiative of our people (in building the Mandela school) is very encouraging.”

Derek Hanekom, deputy minister of Science and Technology, believes the institution could provide lessons for the character of specialised schools that could emerge in the country in future. He promised that his department would provide any expertise required by the new institute.

A well-developed school in an underprivileged village such as Mvezo is necessary to help bridge the gap between livelihood standards of rural and urban dwellers, said Mandla.

Boarding at a public school 80km or more away from home has its own problems for Mvezo’s teenagers.

Mvezo’s Mjikelelo Mabhoza, 24, is unhappy with the situation. He’s in favour of high schools being located within the village, as is the case in most other areas.

Studying in far-flung high schools compounds social problems for Mvezo’s youngsters. “There are no parents there,” Mabhoza pointed out. “Our peers are drawn to drugs and others fall pregnant.”

Mabhoza matriculated at a high school in Mthatha and went on to enrol at a college in Welkom, a town in the Free State province. He’s graduating with a travel and tourism diploma in July and is hoping to land a job soon.

“The new school will be a huge improvement for Mvezo. We’re struggling here,” he said.

The excitement about the Mandela School of Science of Technology is shared by all community members.

“We say never and never again shall the children of this area be deprived of their constitutional right to education,” said Gqirha Madasa from the Mvezo Development Trust.