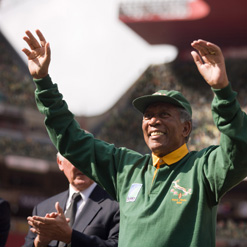 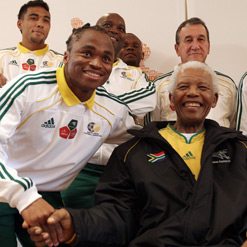 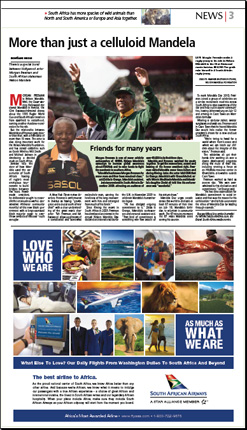 This article originally appeared on page
three of South Africa Now, a six-page
supplement to the Washington Post
produced on behalf of Brand South Africa.
(Click to enlarge.)

Morgan Freeman is Nelson Mandela. Well, the Oscar-winning Hollywood star played Mandela in Invictus, the Clint-Eastwood-directed drama about the 1995 Rugby World Cup and South Africa’s transition from apartheid to nationhood, earning another Academy nomination for his role.

But the relationship between Mandela and Freeman goes deeper than that, with a friendship of more than 10 years. The actor is also doing important work for the Nelson Mandela Foundation, and has joined the likes of Oprah, Will Smith and Michael Jackson in developing a decided crush on South Africa.

Invictus tells the story of how Mandela used the opportunity of South Africa’s hosting of rugby’s most prestigious tournament to build bridges between the races. Newly made president, he deliberately sought to reconcile the previously powerful, conservative Afrikaner community resentful of the new black government with a long-oppressed black majority eager to overthrow symbols of the past – such as rugby.

A New York Times review describes Freeman’s performance as having “gravity, grace and a crucial spark of mischief” with a clear understanding of the great man’s character: “Mr Freeman and Mr Eastwood allow us glimpses of a complicated and somewhat melancholy man, carrying the loneliness of his long imprisonment with him and estranged from much of his family.”

Since filming the movie in South Africa in 2009, Freeman has developed an interest in the annual Nelson Mandela Day, declared an international day by the UN in November 2009 to celebrate Mandela’s humanitarian legacy.

“He has pledged ongoing commitment it,” said Zelda le Grange, Mandela’s spokesperson and personal assistant. “That kind of commitment is something very few people of his stature show.”

Mandela Day urges people across the world to dedicate at least 67 minutes of their time on 18 July, Mandela’s birthday, to volunteer in community work. The 67 minutes represent the 67 years Mandela spent serving his country.

To mark Mandela Day 2010, Freeman joined a group of celebrities on a six-day motorcycle road-trip across South Africa to raise awareness of the day and help out in poorer communities, leaving Johannesburg on 12 July and arriving in Cape Town on Mandela’s birthday.

Wearing a corduroy jacket, aviator sunglasses and peak cap, Freeman said in Cape Town that he hoped Mandela Day would help realise the former president’s dream for a new and just South Africa.

“We’re trying to head for a world where there’s peace and where we can teach our children about integrity of this vision,” Freeman said.

The celebrities all got their hands dirty working on over a dozen development programmes along the route of their trip, including erecting a fence at an HIV/Aids response centre in Khayelitsha, a township outside the Cape Town.

Freeman worked as hard as anyone else.

“We were overwhelmed by his dedication and commitment,” said Le Grange.

“He has deep appreciation for Mandela’s commitment to social injustice and that was the reason for his participation and to help us promote the ethos of Mandela Day by leading through example.”

Freeman is one of many celebrity ambassadors of 46664, Mandela’s campaign to increase global awareness about HIV/Aids and raise funds to fight the pandemic in Southern Africa.

“Mandela has known Morgan Freeman for many years and they have remained close,” Le Grange says.

Invictus premiered in South Africa in December 2009, attracting an audience of over 48 000 in its first three days.

Mandela and Freeman watched the movie together. To get the role right, Freeman visited Mandela many times before and during filming. Later, the actor told CNN that Le Grange, Mandela’s wife Graça Machel, ex-wife Winnie Madikizela-Mandela and Mandela’s daughter Zindzi all told him his performance was “wonderful”.