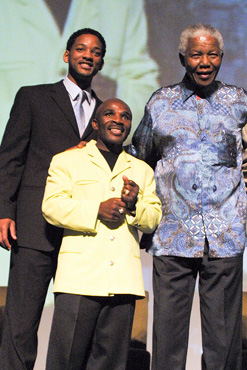 Jacob “Baby Jake” Matlala with Hollywood actor Will Smith and Nelson Mandela at the boxer’s final fight at Carnival City in 2002, in which he defeated Colombian Juan Herrera, 10 years his junior.
(Image: Hush Naidoo, Flickr)

Less than two days after the death of Nelson Mandela, South Africa was dealt another body blow. Early on Saturday 7 December, news filtered out that another great boxer, former world flyweight champion Jacob “Baby Jake” Matlala, had succumbed to lung infection and passed away at Charlotte Maxeke Hospital in Johannesburg at the age of 51.

“My greatest regret in life,” Mandela once joked, “is that I never became the heavyweight boxing champion of the world.” South Africa’s greatest statesman was always a keen and competent boxer. Although Matlala, who won the world flyweight title in 1999, was a tiny 1.48 metres tall and Mandela a towering 1.83 metres, the two always had a bond through boxing.

For his last fight in 2002, Matlala was carried into the ring at Carnival City, Brakpan, sitting on a throne. His opponent, Colombian Juan Herrara, 10 years his junior, stood no chance. Matlala outboxed and danced rings around him. Before Herrara’s knees buckled under in the seventh round, Matlala did the famous Muhammad Ali shuffle to the delight of 5 000 fans. Among them was Nelson Mandela and Hollywood actor Will Smith.

Still fit and hungry at 40, he retired only because, he told a journalist later, “I have run out of small people to fight.” All the good flyweight fighters – the division he dominated – had retired and the next generation were still in training.

That generation mattered to Matlala, and he stayed fit after retirement. Like his idol Mandela, who in turn revered the “little big man”, Matlala turned his attention to mentoring the young: aspiring boxers in Dube, Soweto, where he trained. After his final bout in 2003 Baby Jake presented his World Boxing Union championship belt to Madiba as a token of his work for young South Africans.

Matlala was the world’s shortest champion, but he outfought and outsmarted bigger fighters with a longer reach. Boxers are more comfortable fighting from distance, landing blows away from the threat of their opponent. Matlala was a swarmer, like former heavyweight champion Joe Frazier – a short boxer who crowds their opponent, making them uncomfortable by throwing lots of punches.

He was as precise as a surgeon and his favourite punch was to the chin of opponents who looked down on him. As he told a reporter in 2003, he perfected a punch unique to him, because of his height: “I hit over arm; it’s my best punch.”

His professional career lasted 22 years, with 68 bouts. He had 19 world title fights with 54 victories, the most of any South African boxer.

One of South Africa’s favourites

It all began in a gym in Meadowlands, Soweto. As a 10-year-old he joined his father, an avid amateur, and developed a passion for the sport that saw him turn professional in 1979 at the age of 17. After just four fights Baby Jake was the South African junior flyweight champion.

Matlala’s disregard for his small size and ferocious punching speed made him one of South Africa’s favourite sportsmen. He ended his career having won titles in four divisions: WBO junior fly and flyweight, and IBA and WBU junior flyweight. Of all his professional bouts his most fondly remembered was winning the maligned International Boxing Association title. He defeated the legendary Michael Carbajal, a five-time world champion nicknamed “Little Hands of Stone”‘, in a bout where Matlala was the underdog.

As great as his contribution in the world of sport was, this big-hearted dynamo earned even more respect after retirement. He dedicated himself to charitable work including the Laureus Sport for Good Foundation and HIV/Aids projects, and gave motivational talks to youngsters.

Too disciplined to train

In retirement Matlala continued to rise at 05h00 to train at the Dube Boys Boxing Club. This discipline caused some tension in his training of young boxers, as he expected the same dedication from them as well. His wife Ausi Mapule once said that he was a terrible trainer because he was so demanding.

Three years ago the champion was admitted to the Lesedi Clinic in Dobsonville suffering from double pneumonia. His three-week stay was met with concern and later shock when it was revealed that Matlala was penniless. South Africans rallied around and donated money to cover his mounting medical bills

Matlala reacted with outrage at talk of charity bouts and fundraising for him. News of his penury was exaggerated, he told City Press newspaper.

“I know the experience of dying,” he said. “The stress I was subjected to due to my ill health plus false reports that I was broke intensified my plight, making me believe my life was finished.”

Pastor Joshua McCauley of the Rhema Bible Church, Matlala’s home church, said the champion had been hospitalised for a while but had asked to go home to visit his family. Matlala was respected as much for his charitable work after retirement as his prowess in the ring. He fought with heart and good grace, and lived his life by one principle. As he told the New Age newspaper last year, “If you don’t stand up for yourself, people will never take you seriously and you will never be counted.”