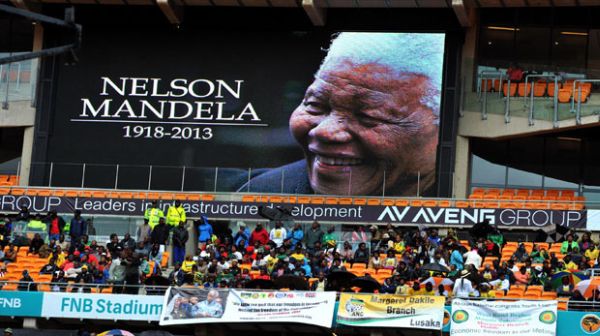 On 10 December 2013, tens of thousands of South Africans gathered at the massive FNB Stadium outside Soweto for a memorial to Nelson Mandela. (Image: GCIS)

As we commemorate a year since the death of South African statesman Nelson Mandela on 5 December 2013, we look back at significant moments in his life and struggle, told partly in his own words.

21 June 1961: British ITN reporter Brian Widlake met Mandela, then on the run from the police, to conduct the first ever TV interview with the future president of South Africa. In it, Mandela asserted his commitment to non-racialism: “We have made it very clear in our policy that South Africa is a country of many races. There is room for all the various races in this country.”

Later he explained why liberation movements had been forced to move from peaceful protest to violence as a tool of struggle. “There are many people who feel it is useless and futile for us to continue talking peace and non-violence, against a government whose reply is only savage attacks on an unarmed and defenceless people.”

20 April 1964: Charged with sabotage, Mandela delivered a statement from the dock during his trial in Pretoria that revealed the depth of his resolve in the fight against apartheid and his willingness to lay down his life in an effort to end white racist rule.

“During my lifetime I have dedicated myself to this struggle of the African people,” Mandela said. “I have fought against white domination, and I have fought against black domination. I have cherished the ideal of a democratic and free society in which all persons live together in harmony and with equal opportunities. It is an ideal which I hope to live for and to achieve. But if needs be, it is an ideal for which I am prepared to die.”

The last sentence referred to the real possibility that Mandela and his fellow defendants would be sentenced to death. As it turned out, they were given life in prison.

Listen to Nelson Mandela’s full stament from the dock at the Rivonia Trial:

11 February 1990: Mandela walked out of South Africa’s Victor Verster prison near Cape Town after 27 years in captivity, holding hands with his wife, Winnie Mandela. He held up his fist and smiled broadly. Mandela’s release after so long was almost inconceivable for delighted supporters who erupted in cheers as hundreds of journalists pressed forward. The world watched the rousing occasion live on television. Because of Mandela’s decades-long confinement, few people knew what he looked like, until photos of him were published in national newspapers a few days before. Mandela said he was flabbergasted by the reception.

“When I was among the crowd I raised my right fist, and there was a roar. I had not been able to do that for 27 years and it gave me a surge of strength and joy,” Mandela wrote. He also recalled: “As I finally walked through those gates to enter a car on the other side, I felt– even at the age of 71– that my life was beginning anew.”

10 December 1993: Nelson Mandela and then-president of South Africa FW de Klerk jointly won the Nobel Peace Prize in 1993 for their contributions to the end of apartheid. Mandela dedicated the prize to all the people who fought against “the violence” of apartheid. He pledged to continue in his fight towards the noble goal of “a society which recognises that all people are born equal, with each entitled in equal measure to life, liberty, prosperity, human rights and good governance”.

27 April 1994: Nelson Mandela cast his vote in South Africa’s first democratic election. Millions of others queued for hours to vote for the first time in their lives.

He said after the vote: “This is for all South Africans, an unforgettable occasion. It is the realisation of hopes and dreams that we have cherished over decades. The dreams of a South Africa which represents all South Africans. It is the beginning of a new era. We have moved from an era of pessimism, division, limited opportunities, turmoil and conflict. We are starting a new era of hope, reconciliation and nation building.”

10 May 1994: Nelson Mandela became the first black president of South Africa after democratic elections, taking the oath of office at the Union Buildings in Pretoria, the South African capital. Leaders and other dignitaries from around the world attended the historic occasion, which offered many South Africans another chance to celebrate in the streets.

At the close of his inauguration speech, Mandela said: “Never, never and never again shall it be that this beautiful land will again experience the oppression of one by another and suffer the indignity of being the skunk of the world,” he said. “Let freedom reign. The sun shall never set on so glorious a human achievement! God bless Africa! Thank you.”

24 June 1995: Mandela strode onto the field at the Rugby World Cup final in Johannesburg, wearing South African colours and bringing the mostly white crowd of more than 60 000 to their feet. They chanted “Nelson! Nelson! Nelson!” as the president congratulated the victorious home team in a moment that symbolised racial reconciliation.

Mandela’s decision to wear the Springbok emblem, the symbol once hated by blacks, conveyed the message that rugby, for so long shunned by the black population, was now for all South Africans.

The moment was portrayed in Invictus, a Hollywood movie directed by Clint Eastwood. The film tells the story of South Africa’s transformation under Mandela’s leadership through the prism of sport.

29 November 2003: South Africa reportedly has the highest number of people living with HIV/Aids in the world, an issue that has torn apart lives, families and entire communities. Mandela played a significant role in creating awareness and removing the stigma associated with HIV and Aids in South Africa. A series of music concerts took the world by storm in the 2000s – they were called 46664 after Mandela’s prison identification number. At the first concert, which took place in 2003, Mandela said: “Aids is no longer just a disease; it is a human rights issue.”

11 July 2010: A smiling Mandela waved to the crowd at the Soccer City stadium at the closing ceremony of the Fifa World Cup, whose staging in South Africa allowed the country, and the continent, to shine on one of the world’s biggest stages. Mandela appeared frail as he was driven in a golf cart alongside his wife, Graca Machel.

Mandela had kept a low profile during the month-long tournament, deciding against attending the opener on 11 June after the death of his great-grand daughter in a traffic accident following a World Cup concert.

The former president did not address the crowd on that emotional day in the stadium. It was his last public appearance.