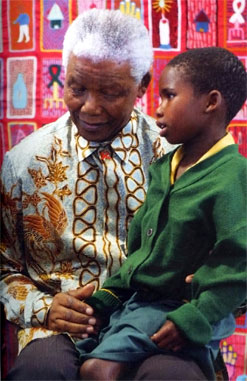 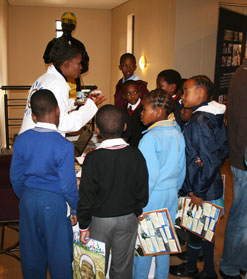 Children’s education is at the heart of
Mandela Day 2010.
(Image: Janine Erasmus)

The Nelson Mandela Institute for Education and Rural Development (NMI), together with the Department of Basic Education, is sending a message to all South Africans to help to make a difference in early schooling on Mandela Day, 18 July.

The campaign was launched in Johannesburg at the Nelson Mandela Foundation earlier in the month, with teachers, education activists, government representatives and pupils in attendance.

The Nelson Mandela Institute is based at the University of Fort Hare in Alice in the Eastern Cape.

Power of the written word

The call has gone out for South Africans to take inspiration from the six core ideas of Mandela Day 2010, and do their bit to ensure that all local school children benefit from having easy access to books.

The focus of the 2010 event is libraries, and supporters are encouraged to participate in the stocking of such school facilities all over the country.

Kim Porteus, NMI executive director, said that ideally, every day should be a Mandela Day. “A child’s success in education depends on the number of joyful words he or she is exposed to in the first eight years of life,” she said. “Books are more powerful than we know.”

Porteus delivered a message from the former minister of posts, telecommunications and broadcasting, Jay Naidoo, who is now chair of the Global Alliance for Improved Nutrition. Naidoo was scheduled to attend the launch, but was unable to make it.

“The 2010 Fifa World Cup has created confidence and optimism,” she said on Naidoo’s behalf, “and with this new chemistry in South Africa, we can no longer have an education system that doesn’t give our children dignity”.

The inaugural Mandela Day took place in 2009 on the elder statesman’s 91st birthday. Originally a South African event, the UN General Assembly later proclaimed 18 July a global campaign, which marked the first time that the world body honoured a specific person with an international day of celebration.

Millions around the world embraced the concept of devoting at least 67 minutes of their day to helping people in need. The number 67 symbolises the 67 years of Mandela’s life spent in public service – including five years as South Africa’s first democratically elected president.

Books are a necessity

The guest speaker at the launch was Reverend Thabo Makgoba, who is the Anglican Archbishop of Cape Town. He is also the patron of the Equal Education organisation, which advocates for quality and equality in South African schools.

“I am particularly delighted that this year the Nelson Mandela Foundation, the Nelson Mandela Institute and Equal Education are together highlighting the need to promote reading, especially through the resourcing of school libraries,” said Makgoba, adding that reading played a huge part in the life of the former president, who is a lawyer by profession.

Makgoba lamented the fact that a mere 8% of South African public schools have stocked libraries, and pointed out that children from schools where libraries were stocked and staffed do significantly better in life than those without access to this valuable resource.

“School libraries are not a luxury – they are a necessity,” said the cleric, encouraging people to use their 67 minutes to read to a small child or elderly person, to give a book to a school, or to make a donation that will enable books to be bought.

“Education is the most fun thing I’ve ever experienced,” she said, “and everyone in South Africa has the ability to ensure that our children benefit from learning”.

Businesswoman and NMI board member Basetsana Kumalo called on the private sector to support early education, and reminded those present that much of Mandela’s power and dignity stemmed from his readiness to take a stand for others.

“We are waging an economic war, but education enables you to make better choices,” said Kumalo, whose mother was a teacher. “Through education we can fight poverty, sexism and discrimination, and win.”

Themba Kojana, chief director in the Department of Basic Education, expressed his department’s willingness to partner with the NMI and the Nelson Mandela Foundation.

“Government carries the responsibility of providing children with a quality education. However, we can’t do it all alone and this is where partnerships are so important.”

One: Create safe and cheery schools
Many crèches and schools are not happy, safe and warm. Taking some time to help clean the classrooms or work in the garden will create an exciting and inspirational space for pupils.

Two: Make and donate educational toys
Many crèches and classrooms don’t have basic educational toys like puzzles and blocks, but these tools allow children to have fun while they learn.

Three: Give a fun book
Give a favourite book or write a story, one that a child is sure to enjoy. Many children don’t have access to books written in their mother tongue, but often it is in this way that they form a lasting connection with books.

Four: Read together
Reading to children, and with them, will allow them to experience the joy of books.

Five: Tell a story
Story-telling is a way of passing on history, and teaching children about life, especially when the story is told by a person who has experienced the events they are relating.

Six: Support children at play
Children learn through both independent and organised play, but many don’t get the chance because they don’t have suitable supervision and guidance at break times, or after school.