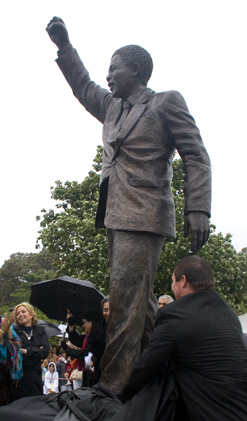 The three-metre-high statue of Nelson
Mandela is unveiled outside Groot
Drakenstein Prison. 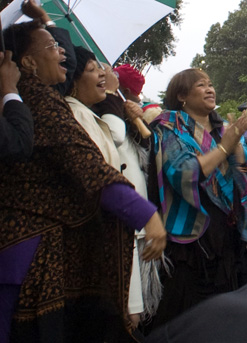 Friends and family react with joy to the
statue’s unveiling. On the far left is Graca
Machel, Mandela’s wife, and next to her is
Winnie Madikizela Mandela, his ex-wife. 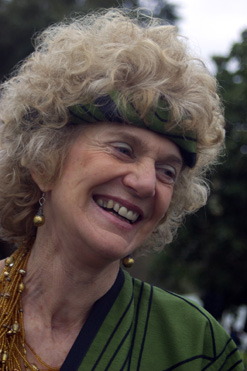 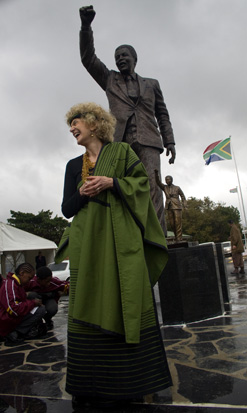 Doyle with her creation.

Words and pictures by Jennifer Stern

A larger than lifesize bronze statue of Nelson Mandela was unveiled on a rainy Thursday in late August at Groot Drakenstein Prison in Paarl, near Cape Town. Formerly known as Victor Verster, this was where Mandela spent the last few years of his 27 years in jail in relative comfort, as he and other ANC stalwarts negotiated with the apartheid government on the terms of his release and the nature of the new South Africa.

In 1990 Mandela walked out of this prison a free man, going on to become South Africa’s first democratically elected president. He walked tall, alternately waving and holding his fist in the air. So when businessman Tokyo Sexwale commissioned the sculpture from renowned Cape Town sculptor Jean Doyle, he had a had a choice of poses. He chose the raised fist – not in anger, but as a gesture of defiance recognised worldwide, and locally always accompanied by the shouted freedom slogan amandla awethu, isiZulu for “power to the people”.

The statue’s location is curious. Rather than putting it in the middle of the city, at the Waterfront, or near Table Mountain, where thousands of people would see it every day, Sexwale, Mandela and the members of their respective foundations decided to place it at this isolated, distant location at the gates of a prison. If you want to see it, you’ll have to make a special trip. But there is a certain integrity in its placement. It stands on the very spot where Mandela took his first steps as a free man. Just outside the prison gates – the culmination of the Long Walk to Freedom – the title of Mandela’s autobiography.

A host of dignitaries braved the cold, wet, stormy-grey, late winter Cape weather to celebrate the inauguration of the tribute. They included a visibly frail Mandela, the world’s favourite statesman, and South Africa’s most well-known and certainly most beloved son. He arrived flanked by his wife Graça Machel and ex-wife Winnie Madikizela-Mandela. Despite Cape Town’s rainy welcome, he took the time out to wave at the crowd and, typically, to chat briefly to each member of the local school choir that sang happy birthday to him as part of the year-long celebration of his 90th birthday.

This is by no means the only tribute to Mandela. Across the world, he has 23 schools, universities and institutions named after him; 25 halls, buildings, monuments and housing developments; 13 stadiums, squares, plazas, parks and gardens; 91 streets, roads, boulevards and parks; 32 bursaries and scholarships, foundations and lectures. Thirteen – and now 14 – statues sculptures and artworks carry his name.

There is symbolism in every aspect of the monument. Mandela is of course walking – taking that long walk. His left foot is forward, reflecting the genesis of his politics, which Sexwale described as “anti-bias, anti-oppression and anti-exploitation”. With a mischievous smile, the businessman added, “And right must follow left,” which brought an appreciative chuckle from the crowed and an amused smile from Mandela.

The pedestal, plinth and surrounds, designed by architect Jan Corewijn, work with the sculpture to create a pointed and visually pleasing lesson in semiotics. Mandela stands on black and white marble rising out of an “island” of concentric symbolism – he spend 18 years of his time in jail on Robben Island. Broken prison bars punctuate the sides of the pedestal, while the upper surface is engraved with barbed wire. But, as Sexwale pointed out, the wire is broken, symbolising the freedom won by Mandela and, by implication, all the people of South Africa.

Beyond the pedestal is a paved area of Malmesbury shale – the backbreaking stone Mandela worked in the Robben Island quarry, and which clad the floor outside his cell. The next layer in the island is a bed of river stones signifying the millions of people across the world who were always with him in spirit, and worked for his release while he was alone and incarcerated. Nestled between the bigger stones are smaller pebbles that testify to Mandela’s love and care for children, which led him to found the Nelson Mandela Foundation.

A ring of black- and white-painted kerbstones is the outermost layer separating the island from the roadway. These, Sexwale says, symbolise “harmony in music, ebony and ivory” – or black and white.

The statue was commissioned by Tokyo Sexwale on behalf of the Sexwale Foundation as a lasting and visible tribute not only to Mandela, but to every person who made sacrifices in the fight for freedom. Sexwale is a prominent South African businessman, host of the South African version of reality show The Apprentice, and a veteran of the antiapartheid struggle. He too spent long years – 13 of them – on Robben Island

Sexwale had little trouble deciding on the sculptor, already being the proud owner of a Jean Doyle sculpture – a five metre-high elephant. Overjoyed, and a little overwhelmed, Doyle accepted – but not without some trepidation. It was far from the biggest sculpture she had done, but was definitely the most important. She was stepping out of her comfort zone, as she usually plays with her subjects – a wry twist here, a fond exaggeration there, a quirky little distortion. But there was no way she was going to fool around with this image – this icon.

She started by looking at photos and video clips of Mandela’s release, studying every aspect of his face, body and stance – the way he moved, the angle he tilted his head. Eventually, she felt she knew him, knew how he would react in any situation – physically, anyway – and was ready to get her hands dirty. The sculpting took about a month, the great man growing, day by day, in Doyle’s Wynberg studio.

Eventually he was done and Doyle handed him over to her husband, Mike, who manages the casting in their foundry in an industrial area some ten minutes from the studio. Casting a three-metre statue is not a trivial process, and it took three anxious months to complete the sculpture. Then it stood jealously protected from inquisitive eyes under wraps until 20 August, when it was trucked out to Paarl.

The next day, while the dignitaries and VIPs were ushered to their seats and the press photographers jockeyed for position, the shroud veiling the statue flapped and fluttered in the gusty wind. Doyle stood off to one side, anxiously awaiting the moment of truth. When asked how she felt, she said, “Very privileged to have been given the commission, but I hope I have done justice to such a great man.”

From the general reaction, the consensus was that she had.