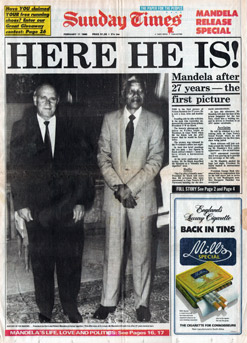 On 11 February 1990 the Sunday Times
newspaper published the first photo
of Nelson Mandela seen in 27
years. Photos of prisoners were prohibited
under the apartheid regime. With
Mandela is then State President FW
de Klerk 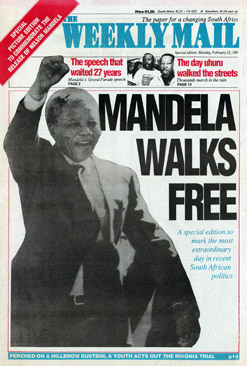 On 11 February 1990, Nelson Mandela walked out of prison, a free man, after serving 27 years of a life sentence imposed by the apartheid government. The world watched as South Africa was suddenly catapulted on the journey to democracy.

Mandela appeared from the gates of the Victor Verster prison in Paarl, Western Cape, hand-in-hand with Winnie Madikizela-Mandela, who was then his wife. His appearance was met with mass euphoria as hundreds had gathered to witness this historic occasion. Both local and international media jostled for the perfect picture or video footage, as Mandela, dressed in a light brown suit, smiled and greeted the crowds before punching a fist in the air, in the “Amandla” tradition.

Mandela was then whisked away to Cape Town, to deliver his first speech as a free man. At about 8pm that evening, he appeared on the balcony of Cape Town’s City Hall to address about 50 000 people assembled to listen to him. He opened his speech with these words: “I stand here before you not as a prophet but as a humble servant of you, the people. Your tireless and heroic sacrifices have made it possible for me to be here today. I therefore place the remaining years of my life in your hands. On this day of my release, I extend my sincere and warmest gratitude to the millions of my compatriots and those in every corner of the globe who have campaigned tirelessly for my release.”

In his speech, he spelt out the way forward for the country, to unite races and forge a future based on the foundation of democracy. He spoke of the need to address the social ills and disintegration of the family structure caused by the fight against apartheid. He then closed his speech, using a quotation from the June 1964 Treason Trial, which is where he was convicted on treason charges, and sentenced to life imprisonment:

“In conclusion I wish to quote my own words during my trial in 1964. They are true today as they were then: ‘I have fought against white domination and I have fought against black domination. I have cherished the ideal of a democratic and free society in which all persons live together in harmony and with equal opportunities. It is an ideal which I hope to live for and to achieve. But if needs be, it is an ideal for which I am prepared to die.’”

After his conviction, Mandela was sent to Robben Island. He served his sentence there for 18 years before being transferred to Pollsmoor Prison on the mainland in 1982. The campaign to release him from prison started as early as 1980, when then-African National Congress (ANC) president, the late Oliver Reginald Tambo, began drumming up international support for Mandela’s release.

After 10 years of lobbying, the apartheid government, under the leadership of FW de Klerk, succumbed to pressure. On the 2nd of February 1990, then-president De Klerk announced the lifting of the ban on the ANC and other liberation movements and said that Mandela would soon be released.

Four years after his release, on 10 May 1994, Nelson Mandela was inaugurated as South Africa’s first democratically elected president. During his inaugural speech, he closed his address with these powerful words: “Never, never and never again shall it be that this beautiful land will again experience the oppression of one by another and suffer the indignity of being the skunk of the world. Let freedom reign.” Mandela served one five-year term and retired in 1999.