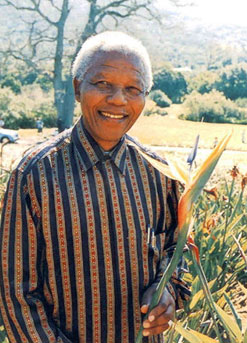 Former president Nelson Mandela is one of South Africa’s most recognisable faces, loved and respected all over the world and honoured in numerous ways. Now the life of the much-revered elder statesman, who turns 90 in June 2008, is to be the subject of a forthcoming Broadway production.

The production is a joint initiative between marketing consultants PSE Broadway LLC and the vastly experienced entertainment production team of Routh/Frankel/Baruch/Viertel Group, responsible for previous hits such as The Producers, Little Shop of Horrors and The Sound of Music. “The South African story is not only inspiring but also deeply dramatic and lends itself perfectly to musical adaptation,” said the group’s Richard Frankel.

Bill Futterer of PSE Broadway said the production has been on the drawing board for five years. While a creative team and director has yet to be named, two South Africans are already confirmed for the project – Mandela’s daughter Zindzi, and South African theatre stalwart Welcome Msomi.

The show will draw partly on a soon-to-be-released Zindzi Mandela memoir, merging her experiences with the historical facts of the time. Mandela spent 27 years in prison for crimes against the apartheid government. He was released in 1990 and went on to become president of the African National Congress and then of South Africa.

“Zindzi’s insight into those years and the powerful personal stories of the time will make for a rich theatre experience,” said veteran author/playwright Msomi.

The musical will make its stage début in May 2010 if all goes according to plan.

Music is part of the struggle

A 1988 Broadway production titled Sarafina! depicted South Africa’s struggle for freedom against the backdrop of the 1976 Soweto riots. That production played for 18 months on Broadway after its début at Johannesburg’s Market Theatre, and was also made into a film in 1992.

South Africa’s struggle period was characterised by an inspiring repertoire of freedom songs. The apartheid government banned conventional forms of protest, and people used music and dance not only to inspire hope among themselves but also to convey important messages. This music forms an important part of the liberation of South Africa. “Freedom songs were so important to the morale of the people,” said Zindzi Mandela, “so it’s natural for the story to be told with music as a cornerstone.”

Over the course of many years Nelson Mandela has garnered a host of tributes and accolades of every shape and form, including the 1993 Nobel Peace Prize, which he shared with another former South African president, FW de Klerk.

Countless organisations have requested the former president to become their patron. Concerts have been held all over the world in his honour. Statues of him stare down at millions of passers-by. A number of parks, plazas, stadiums and squares bear his name. In South Africa alone there are 30 Nelson Mandela streets, roads and avenues, and another 61 in international cities from Brazil to Zimbabwe.

Some honours have been more unusual than others. In 1973 the heaviest nuclear particle discovered to date at the University of Leeds was named the Mandela particle. In 2006 the statesman became an honorary member of the English football club Manchester United during their visit to South Africa.

Johannesburg’s Nelson Mandela Bridge is the largest cable-stayed bridge in southern Africa. Then there are the Mandelia microcornata sea slug, the Singafrotypa Mandela spider, the Protea cyneroides “Madiba”, a member of the indigenous protea family of plants, and the Strelitzia reginae “Mandela’s Gold” yellow Bird of Paradise flower, also indigenous to South Africa.

These are just a few of Mandela’s many deserved accolades that include honorary citizenship, freedom of cities, more than 100 awards, and 67 honorary degrees and diplomas from educational institutions around the globe.