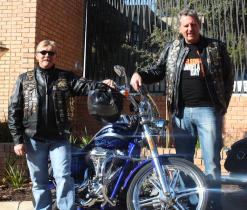 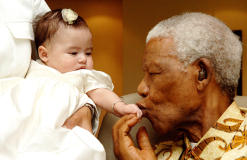 Known for his special fondness for children, Mandela is seen here kissing the hand of an infant. 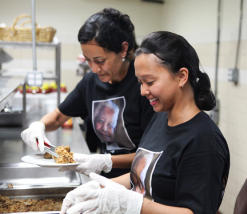 With just days to go until 18 July, Nelson Mandela International Day, and as Mandela himself enters his second month in hospital, people have been urged to make the day memorable in 2013.

The event was proclaimed by the UN General Assembly on 10 November 2009 in recognition of the statesman’s contribution to peace and freedom and his tireless fight for democracy. It falls on his birthday, and this year he turns a venerable 95.

The idea behind Mandela Day is that people should devote at least 67 minutes to helping others, as a tribute to Mandela’s 67 years of service to his country in his various roles – a lawyer, a high-profile prisoner, a peacemaker and humanitarian, and South Africa’s first democratically elected president.

In General Assembly resolution A/RES/64/13, it states that the organisation welcomed “the international campaign initiated by the Nelson Mandela Foundation and related organisations to each year observe 18 July, his birthday, as Mandela Day” and that it decided to “designate 18 July as Nelson Mandela International Day, to be observed each year beginning in 2010”.

The assembly invited all member states, other organisations within the UN, international organisations, and civil society to “observe Nelson Mandela International Day in an appropriate manner”.

This manner can take many forms, whether it involves serving the community or donating to a charity. If people don’t have anything specific in mind, they can simply join one of the many organisations which have already planned their activities for the day.

The theme for this year’s event is Take Action; Inspire Change; Make Every Day a Mandela Day, and initiatives are focusing on matters such as food security, literacy and shelter, according to the Nelson Mandela Centre of Memory.

Tiger Brands, for instance, will distribute food parcels to underprivileged schools in Limpopo and KwaZulu-Natal provinces, in partnership with the centre and the Department of Basic Education. Employees from executives to factory workers will hand out the parcels, and will also do gardening and painting where needed.

Pick n Pay invites people to contribute to its book drive, and shoppers can drop off books and DVDs into collection points in stores.

South African Airways, as in previous years, will be carrying Mandela’s message to the world in branded aircraft during July and the three months following.

Support from around the world

Meanwhile, messages of support have come from global leaders such as Archbishop Emeritus Desmond Tutu, Bill Clinton, the Dalai Lama and Richard Branson.

“I would like to express my admiration about this great man, Nelson Mandela,” said the Dalai Lama.

“You’re an example to us all of perseverance, strength, wisdom, forgiveness and grace,” was Branson’s message.

“We have all equally been awed by his dedication to others, and by his inspiration to serve as he did,” said Clinton, “working to build a more just and peaceful world.”