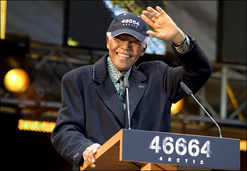 Since his release from prison in 1990, one can safely say that Nelson Mandela has never woken up and wondered if anyone would remember his birthday.

Although he has no blue blood, Mandela’s birthdays are celebrated with the pomp and ceremony usually reserved for royalty. From concerts aound the word to books and art exhibitions in his name he has had it all for his birthday, and his 90th one on 18 July is no exception. Well ahead of the day, wishes and gifts from ordinary and famous people alike have been streaming in but it is in London where the main celebrations will take place this year.

Madiba has been in the English capital for a week of celebrations ahead of the 46664 concert in his honour, which will be taking place in Hyde Park on 27 June. The concert bears the name of his prisoner number while he served a 27-year sentence on Robben Island. His crimes included sabotage committed while he spearheaded the struggle against apartheid.

Exactly 46 664 tickets went on sale, the proceeds of which will go towards the 46664 foundation which raises funds for HIV/AIDS projects, a cause close to Mandela’s heart. In January 2005 he lost a son to AIDS, and South Africa, his home, has one of the highest HIV/AIDS infection rates in the world.

Some of the artists performing in the three-hour concert include rock legends Queen, Amy Winehouse, Leona Lewis, Annie Lennox and Simple Minds. A handful of South African artists like Loyiso and the Grammy Award-winning Soweto Gospel Choir will also make an appearance.

This concert is also being held to commemorate 20 years since the Free Nelson Mandela concert was held in Wembley Stadium, London in June 1988 to raise awareness about Mandela’s incarceration. More than 72 000 people attended and it was broadcast to more than 600-million television viewers from 60 countries.

The first 46664 concert was held on 29 November 2003 at Green Point Stadium in Cape Town and since then concerts have taken place in Johannesburg, Norway, Madrid and London.

A charity gala attended by some of the world most influential people including heads of states, media mogul Oprah Winfrey, and famous entertainers Sir Elton John and Sir Bob Geldof was held on 26 June. The evening raised more than $10-million which will be used in the fight against HIV/Aids in Southern Africa.

This year a website was launched 46 664 minutes before Mandela turns 90, where people can leave their birthday wishes. So far more than 40 000 messages have been received with about 29 000 of them coming from Tanzania.

Some other events to mark the occasion which are scheduled for the rest of the year include the launch of the Nelson Mandela Rhodes Foundation’s young leader’s facility in the Western Cape in July, and the delivery of the sixth annual Nelson Mandela Lecture at the Walter Sisulu Square in Kliptown, Soweto, by Liberian president Ellen Johnson-Sirleaf.

In August the 15-city American symphonic production titled Portrait of Mandela kicks off in Atlanta and in September the 46664 organisation has been awarded the only slot reserved each year for a charity event at the Royal Albert Hall in London.

The ANC, the ruling party and one Mandela has been a member of since 1942, will host a free concert in Pretoria, Gauteng, in honour of Mandela.