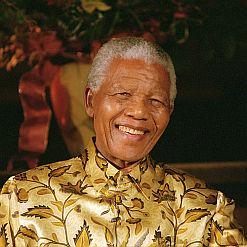 A new television mini-series documenting the life of former president and Nobel laureate Nelson Mandela will be filmed mostly on location in South Africa and will cost a whopping US$20-million (R160-million) to produce.

Three production companies will be involved with the six-hour mini-series – Canada’s Blue Ice Film; the UK’s Left Bank Pictures and Out of Africa Entertainment, from South Africa. Mandela’s grandson Kweku Mandela will co-produce.

The series will be titled Madiba, Mandela’s Xhosa clan name and one by which he is fondly known.

Lance Samuels of Out of Africa said: “We will start filming in August and plan to release by 2013. Right now we are just pretty much casting and putting the script together.”

Kweku Mandela said: “Madiba would not just be another project painting my grandfather as ‘Mandela the saint’, but would seek to credit the many people who helped shape his life story.”

The series aims to educate a new generation about the system of apartheid through which South Africa’s white minority government oppressed the black majority for more than 40 years, until 1990.

The series will span six decades of Mandela’s life and chronicle the events leading to 1994, when he assumed leadership of South Africa as the country’s first democratically elected president, after being imprisoned for 27 years.

The script will be based on two books, the autobiographical Conversations with Myself, and Nelson Mandela by Himself, which features authorised quotations.

The series will look at Mandela’s childhood, his relationship with his mother and how it shaped his train of thought.

Viewers will see him joining the African National Congress (ANC) in the 1940s and playing an instrumental role, with Oliver Tambo and Walter Sisulu, in founding the ANC Youth League.

Madiba will culminate in his inauguration as president of South Africa and will show how his ideals are still being used throughout the country today.

The ANC celebrated its centenary on 8 January 2012.

This will not be the first time that Mandela’s eventful life has been captured on camera.

He has been portrayed by various actors, such as Sydney Poitier in Mandela and De Klerk; Denis Haysbert in Goodbye Bafana; Morgan Freeman in Invictus and David Harewood in Mrs Mandela.

UK film-makers Andy Harries and Marigo Kehoe, of Left Bank Pictures, came to South Africa in 2011 to do research and also get Mandela’s blessings for the project.

Harries said at the time: “There is a whole generation of people who weren’t even born when Nelson Mandela finally walked free from prison in the early 1990s. His story is one that they need to know.”

Harries added that he believed a “quality six-hour TV series with a budget of over $3-million (R24-million) an hour will be able to give the story the space and breadth it needs”.

Blue Ice Film, co-founded by Steven Silver and Neil Tabatznik, will not be unfamiliar to South Africans as this is the production house responsible for The Bang Bang Club.

The movie depicts the real-life experiences of four photographers: Kevin Carter, Greg Marinovich, Ken Oosterbroek, and João Silva, who were known as the Bang Bang Club.

The four captured images between 1990 and 1994 of faction fighting between the ANC and the Inkatha Freedom Party supporters, who were locked in a power struggle after the unbanning of both political parties.

Out of Africa Entertainment was also involved in the production of The Bang Bang Club and lists the evergreen Leon Schuster’s Schuks Tshabalala’s Guide to South Africa in their credits.

Left Bank Pictures produced the movie The Queen, starring veteran actress Helen Mirren as Queen Elizabeth II. The film depicted the differing views held by the royal family after the death of Princess Diana in 1997, and the public pressure they had to deal with.