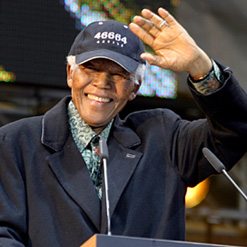 Former South African President Nelson
Mandela has reportedly been seen by a
specialist pulmonologist, who treats
respiratory systems. His respiratory
problems date back to when he was
imprisoned on Robben Island, where he
suffered from tuberculosis.
(Image: 46664)

Following a health scare that has gripped the world, former South African President is to be released from hospital to receive medical care at home, it was announced at a news conference on Friday.

Speaking at the Milpark Hospital in Johannesburg, where Mandela was admitted for an acute respiratory infection on Wednesday, Deputy President Kgalema Motlanthe thanked well-wishers at home and abroad for their messages of support for the 92-year-old former statesman.

Also at the press event, Lieutenant General Vejay Ramlakan, Surgeon-General of the South African National Defence Force, said he is satisfied with Mandela’s recovery. “He will be discharged to receive home-based care at his home.”

On Thursday night Motlanthe issued a statement that speculation that Mandela’s health had seriously deteriorated was unfounded and that he was in high spirits.

“We wish to confirm that Mr Mandela is in Milpark Hospital undergoing a few specialised tests and investigations,” Motlanthe said. “Given the medical history of our former president, his health over the last few years and his age, these tests are necessary in order to provide optimal health care.”

The Nelson Mandela Foundation, which issued a statement on Wednesday afternoon confirming that he had been admitted, issued no further comment on Thursday, leading to speculation that his health had seriously deteriorated.

On Thursday, high-profile government officials, politicians, friends and family members were seen going in and out of the hospital.

According to some media reports, Mandela has been seen by a specialist pulmonologist, who treats respiratory systems. His respiratory problems date back to when he was on Robben Island, where he suffered from tuberculosis.

“Mandela suffers from ailments common to people of his age, and conditions that have developed over the years,” Motlanthe said. “We may recall that he suffered from tuberculosis while on Robben Island and has had previous respiratory infections.”

The South African National Defence Force is responsible for the medical requirements and care of the country’s current and retired presidents. Motlanthe said that he had tasked the Defence Force with ensuring that all necessary support was provided to the former president and his family.

“I can assure all South Africans and the world that Madiba is in good hands,” he said.

On Thursday the presidency urged restraint in the face of growing international media frenzy over Mandela’s health and the horde of journalist camped out at the Milpark Hospital.

“We urge the media to afford him the dignity and respect that he is entitled to as the country’s founding democratic president, as a national hero and also as a citizen of the republic,” presidential spokesperson Zizi Kodwa said in a statement.

“The media should balance the quest for stories with acting within the bounds of human decency and ensuring the respect for human dignity. The doctors also need to be allowed to do their work without undue pressure.

“President Zuma wishes former President Mandela well and requests that the family be accorded space to support him in privacy and dignity.”