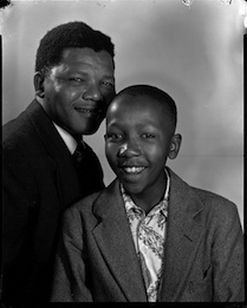 Madiba’s son Thembi died in a car accident at the age of 24 in 1969, when Madiba was on Robben Island.
(Image: Nelson Mandela Centre of Memory)

From the dusty fields of Qunu in Eastern Cape, Nelson Mandela grew to become a wise and admirable man, respected and loved around the world. He is a man of integrity, who is known for his love for children. His influence on a global scale is massive, but just as significant has been his emphasis on the importance of family.

Mandela is called the father of the nation perhaps not only for his role in liberating South Africans but also for the love and support he has shown to its children. A father of six himself, he had four children with his first wife, Evelyn Mase, whom he married in 1944. They had two daughters, both named Makaziwe; the first died in infancy and the second was given the same name in honour of her departed sister.

They also had two sons, Thembekile, who died in a car accident in 1969 at the age of 24, and Magkato, who died of an Aids-related illness in 2005. Mandela was deeply affected by the deaths of his sons, the first of whom died while he was in prison. Mandela was not allowed to attend the funeral nor was he given details of the accident. “I received the tragic news on July 16, when the Commanding Officer showed me a telegram which merely reported the bare fact that Thembi had died in a car accident in Cape Town. Immediately upon receiving this report I made efforts to get detailed and accurate information on the accident,” he wrote in a letter dated 19 November 1969.

He married his second wife, Winnie Madikizela, in 1958. The couple had two daughters, Zinzi and Zenani. Much of their marriage was spent apart – with Mandela in prison – and he did not see his children grow up. “Not seeing them may be why I’ve developed an obsession with children – I missed seeing any for 27 years. It’s one of the most severe punishments prison life can impose, because children are the most important asset in a country. For them to become that asset, they must receive education and love from their parents. And when you are in jail, you are unable to give those things to your children,” he said in an interview with American talk show host Oprah Winfrey in April 2001.

At heart, Mandela is a family man. Passages in his book, Conversations with Myself, for which the foreword was written by American President Barack Obama, are evidence of his yearning for his family. “I love playing and chatting with children … feeding and putting them to bed with a little story, and being away from the family has troubled me throughout my … life. I like relaxing at the house, reading quietly, taking in the sweet smell that comes from the pots, sitting around a table with the family, and taking out my wife and children. When you can no longer enjoy these simple pleasures something valuable is taken away from your life and you feel it in your daily work.”

Among many other awards and prizes received since his release from prison and leadership of a democratic South Africa, in 2005 Mandela received the World’s Children’s Prize and in 2009 he was named Decade Child Rights Hero 2009 for his lifelong struggle to free the children of South Africa from apartheid, and for his unwavering support for their rights. The latter was a joint award with Graca Machel, his third and current wife.

During his term as president, Mandela gave half his salary to the poor, specifically to children. “I have never cared very much for personal prizes. A person does not become a freedom fighter in the hope of winning awards,” he writes in his autobiography, Long Walk to Freedom. In addition, when he received the Nobel Peace Prize in 1993, he gave part of his $1.2-million (R11.7-million) prize money to help disadvantaged children.

Mandela’s work for children continues, despite his retirement from public life and recent illness. Through the Nelson Mandela Children’s Fund, funds are raised and programmes are initiated to ensure a better future for children. The focus of these efforts is on creating a beneficial environment for the welfare of children. The fund raises money for organisations that work with the country’s children and youth, from birth to 22 years of age from underprivileged surroundings.

“Few things make the life of a parent more rewarding and sweet as successful children,” he wrote in a letter while on Robben Island to his friend Amina Cachalia, an anti-apartheid activist, in 1981.

According to the Nedbank Children’s Affinity, which works in partnership with the Nelson Mandela Children’s Fund, the fund has given nearly R315-million (US$31-million) to about 1 850 projects supporting children since its launch in 2005. Nedbank is one of South Africa’s big four banks.

“Our children are the rock on which our future will be built, our greatest asset as a nation. They will be the leaders of our country, the creators of our national wealth, those who care for and protect our people,” Mandela said in 1995 at the dedication of Qunu and Nkalane schools.

He has paid particular attention to Eastern Cape, his home province, arguably the worst affected when it comes to education and educational facilities. It was one of his dreams to have a high school built at his birthplace, Mvezo, a dream that came true when the Mandela School of Science and Technology was built. The school is scheduled to open in January 2014. Not only was the school built in his honour, it also exemplifies his belief that “education is the most powerful weapon which you can use to change the world”.

It is also important that children receive the best medical care and with this in mind the Nelson Mandela Children’s Hospital Trust is raising finances to build a state-of-the-art paediatric academic hospital for children in Southern Africa.

For a man who is so fond of children, it is no surprise that Mandela would want to celebrate his birthday with them. It has become tradition on his birthday for children to be taken to his home village where they join in the festivities. This year was no exception, as people once more gathered in Qunu to celebrate – even though the great man himself was in hospital in Pretoria at the time.

At the Nelson Mandela Museum in Qunu, children were given books to read and they sang happy birthday. Mandela has brought many of the causes he believes in to the fore. He has raised awareness of the challenges of South Africa around the world.