Former president Nelson Mandela was only the second-tallest man in the building when he met South Africa’s final Bafana Bafana squad for the 2010 Fifa World Cup at a gathering at the Nelson Mandela Foundation in Houghton, Johannesburg, on 3 June.

The Bafana team, members of the Mandela family and staff cheered and sang as the elderly statesman arrived wearing the “number four” Bafana jersey, usually reserved for the team captain. It has become something of a tradition for all South African sports teams to meet Mandela before major tournaments. 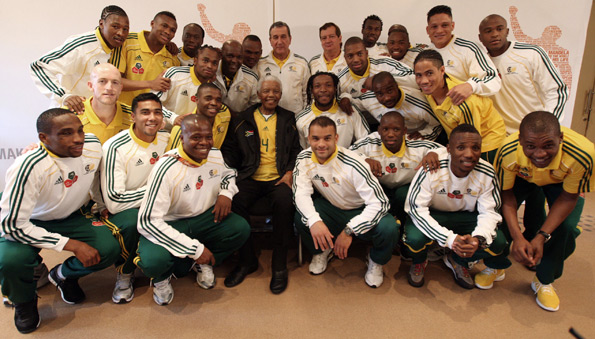 Captain Aaron Mokoena introduced Mandela to the Bafana team, including coach Carlos Alberto Parreira and the technical and management staff.

Presenting 1.98-metre-tall defender Matthew Booth, Mokoena said to Mandela: “This the tallest man in the building.” Mandela is 1.94 metres tall.

Mandela will turn 92 on 18 July – a date the United Nations has declared International Nelson Mandela Day.

On that day people throughout the world are urged to give at least 67 minutes of their time to do good work, honouring the 67 years that Mandela dedicated to make South Africa and the world a better place.

Taking inspiration from the ex-president himself, the Nelson Mandela Foundation said it fully supports South Africa’s Fly the Flag and Football Fridays campaigns, which encourage the country’s people to fly the national flag and wear football jerseys at the end of the working week to get into the spirit of the 2010 Fifa World Cup.

“We hope that all South Africans will wear their football shirts tomorrow [4 June] for the last official Football Friday,” said Sophie Masipa, marketing manager for the International Marketing Council of South Africa.