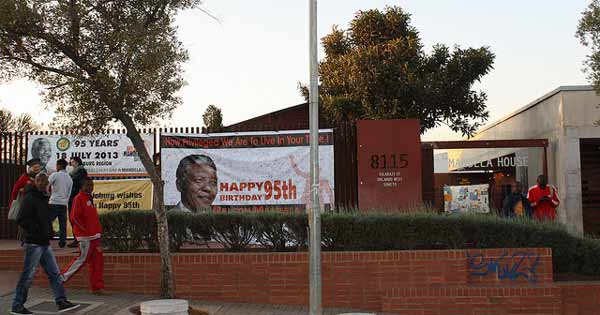 The little Orlando house, at 8115 Ngakane Street, on the corner of Vilakazi Street, was Mandela’s first home of his own. (Image: South African Tourism)

• Mandela’s memories of Qunu, his childhood village
• Mandela’s museum a gift to Qunu
• Soweto: from struggle to suburbia
• Nelson Mandela: son of Qunu returns to the soil
• More to South Africa than Nelson Mandela

Nelson Rolihlahla Mandela came from humble beginnings, living in a remote rural village before moving to the big city, where he started out in a backyard shack with no electricity before he bought his own little house in Soweto. With the coming of democracy, he settled in a previously all white suburb of Joburg.

“I was born on 18 July 1918 at Mvezo, a tiny village on the banks of the Mbashe River in the district of Umtata, the capital of the Transkei,” he noted in his autobiography, Long Walk To Freedom. The Transkei, according to the book, is 800 miles, or 1 300 kilometres, east of Cape Town and 550 miles, or 880 kilometres, south of Johannesburg.

As a young boy, Mandela moved to Qunu, spending his childhood in Transkei before moving to the big city. “Johannesburg in those days was a combination frontier town and modern city,” he noted. After a brief stay with his cousin, who had moved north before him, Mandela arranged to move in with Reverend J Mabutho at his home on Eighth Avenue in Alexandra, a township in north-eastern Joburg.

“Reverend Mabutho was a fellow Thembu, a friend of my family and a generous, God-fearing man,” he wrote. But this arrangement came to end because Mandela was not completely honest about the reasons why he left the Transkei – he had fled before an arranged marriage. “Reverend Mabutho took pity on me and found me accommodation with his next-door neighbours, the Xhoma family.

“Mr Xhoma was one of an elite handful of African landowners in Alexandra. His house – 46 Seventh Avenue – was small, particularly as he had six children, but it was pleasant, with a veranda and a tiny garden. In order to make ends meet, Mr Xhoma, like so many other residents of Alexandra, rented rooms to boarders.”

He lived for a short while in 1941 and 1942 at what is now called Mandela’s Yard, in the township. Mandela described that accommodation as being a tin-roofed room at the back of the main house, no more than a shack, with a dirt floor, no heat, no electricity, and no running water. “Life in Alexandra was exhilarating and precarious. Its atmosphere was alive, its spirit adventurous, its people resourceful.”

He added: “Urban life tended to abrade tribal and ethnic distinctions, and instead of being Xhosas, or Sothos, or Zulus or Shangaans, we were Alexandrans.”

In his autobiography he wrote: “Alexandra occupies a treasured place in my heart. It was the first place I ever lived away from home. Even though I was later to live in Orlando, a small section of Soweto, for a far longer period than I did in Alexandra, I always regarded Alexandra Township as a home where I had no specific house, and Orlando as a place where I had a house but no home.”

The little Orlando house, at 8115 Ngakane Street, on the corner of Vilakazi Street, was also a humble dwelling. Now called the Mandela Family Museum, it was Mandela’s first home of his own. He moved in with his first wife, Evelyn Ntoko Mase, in 1946. After their divorce, she moved out and his second wife, Winnie Madikizela, moved into the home in 1958. After his arrest and incarceration on Robben Island, Madikizela-Mandela continued to live in the house with their daughters, Zenani and Zindziswa, or Zinzi. In those long years of the anti-apartheid struggle, the house was petrol-bombed and set alight several times.

On his release in 1990, Mandela refused to move to the more opulent home, also in Orlando West, that Madikizela-Mandela had built while he was in jail. He wanted only to return to the house of his memories. But he stayed at that house for a mere 11 days, as he was moved around from one secret location to the next until he finally settled at his Houghton residence. This was his last and final home before his death on 5 December 2013.

Mandela separated from Madikizela-Mandela in 1992 and the couple were divorced in 1996. Although her ex-husband handed the house to the Soweto Heritage Trust, Madikizela-Mandela refused to relinquish it and instead converted it into the Mandela Family Museum in 1997. She also opened a pub and restaurant across the road, the famed Vilakazi Street.

During the inauguration of the museum, at which bottles of “Mandela garden soil” were sold, Madikizela-Mandela said: “A lot of history was made here. This is where the 1976 students’ uprising began, where the youth leadership met to change the face of South Africa.”

After leaving the Presidency, Mandela divided his time between Qunu in Transkei and Houghton. In his autobiography, Mandela told of a happy childhood in Qunu, where he was laid to rest on Sunday, 15 December 2013.

“The village of Qunu was situated in a narrow, grassy valley crisscrossed by clear streams, and overlooked by green hills,” Mandela wrote. “It consisted of no more than a few hundred people who lived in huts, which were beehive-shaped structures of mud walls.”

Today, Mandela’s home in Qunu can be described as a quaint dwelling compared to city standards, yet it stands out in the village. Once a herd boy on the rolling hills outside Qunu, he was buried in the soil where he used to play as a child. His burial in Qunu stems from the Xhosa belief that the deceased must be brought home to be reunited with their ancestors and to sleep in the ground from where they were taken. The philosophy is circular, that at the end, a person returns to the beginning.