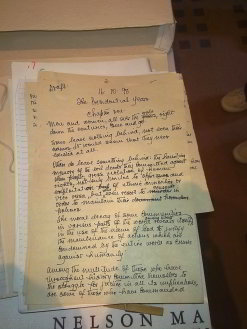 The first page of the first chapter of the
unpublished sequel to Mandela’s
autobiography Long Walk to Freedom. 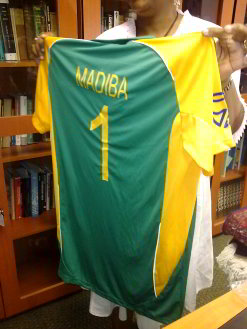 Also known as a sports fan, Mandela has
his own cricket supporter’s shirt.
(Images: Janine Erasmus) 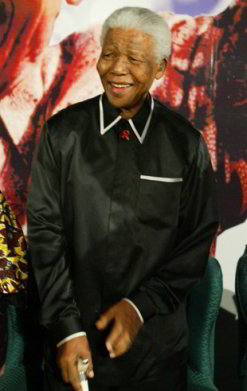 Global search engine Google and the Nelson Mandela Foundation in Johannesburg have struck up a partnership that will see thousands of documents from the foundation’s archives become freely available online.

Printed, audio and visual material held in the Nelson Mandela Centre of Memory (CoM) relating to the life and times of one of South Africa’s most famous citizens is to be digitised and made available in the public domain.

“We plan to start with the collection of documents amassed by Madiba between 1998 and 2002,” said CoM head Verne Harris. “This includes an unpublished sequel to Long Walk to Freedom.”

Harris added that scholarly transcripts will ensure the accuracy of material, and that the centre’s eventual aim is to make every document searchable with the addition of metadata.

“Madiba has given us free rein as to what to publish,” he said, “but we will have to take care to protect third parties where necessary, as well as to give careful consideration to material that was never meant to be public, such as minutes of meetings”.

Foundation CEO Achmat Dangor said that the Centre of Memory was established in 2004 to make Mandela’s remarkable history available to the world. In this light, he said, the team would aim for sensitivity, but not censorship.

Known as a meticulous record-keeper, Mandela entrusted his entire personal archive to the CoM. The documentation includes correspondence with family, friends and colleagues, personal notes, and diary entries during his imprisonment – all of which will soon be publicly accessible at no charge.

With financial help from Google, the website of the Nelson Mandela Foundation, already a rich source of information on the elder statesman, will also be expanded into a fully fledged portal.

All film and radio material is already in digital format, said Harris, which amounts to about 10 000 pages. In order to ensure that available material was as comprehensive as possible, the CoM would identify Mandela collections held in other institutions.

“For instance, the National Archives holds an extensive Mandela prison record,” said Harris. “This is about 100 000 pages of material, and is our next priority.”

More documents are held by the UK and US governments and the Department of Correctional Services, among others. The CoM is in talks with these entities in the hope of getting at least a digital copy of all material, if not the original version.

The ICT giant is involved in other similar initiatives around the world, such as the Google Art Project and a joint venture with Jerusalem’s Yad Vashem, an archive of Holocaust materials.

The latest partnership fits right into Google’s core goals, said Mckend, adding that the company is excited to be involved.

The project arose out of a request from the foundation for Google to help improve the website structure. The request ended up as an archive project.

Google has provided a grant of R8.6-million (US$1.25-million) to assist with the important initiative. However, said McKend, this didn’t make it compulsory for the foundation to use Google technology.

Google has also given the same amount of funding to the Desmond Tutu Peace Centre in Cape Town, so that historical material on the life and career of the outspoken cleric may be made available in digital format. The establishment of an interactive digital learning centre is also part of the project.

Other beneficiaries include the Nigeria ICT Forum, which received R3.4-million ($500 000) for the improvement of internet infrastructure for Nigerian higher education institutions; the Network Startup Resource Centre at Oregon University, which will use its R8.6-million ($1.25-million) to provide technical training to people in African countries; and the Tertiary Education and Research Network of South Africa, which received R5.1-million ($750 000) for its work with local universities in improving their ICT services such as high-speed internet access.