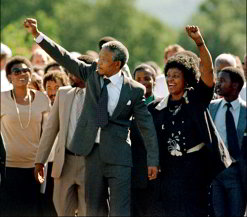 Mandela’s Qunu house is a replica of the
one he occupied in Victor Verster.
(Image: Mthatha Retrospective)

Former president Nelson Mandela took his first steps as a free man on this day 21 years ago.

The struggle veteran was released from the Victor Verster prison – now known as the Drakenstein Correctional Centre – in Paarl, about 60km north-east of Cape Town, in front of an elated worldwide audience of millions.

Mandela arrived at the penal colony of Robben Island, now a World Heritage Site, in 1964 after receiving a life sentence for sabotage and other charges. He was registered as prisoner number 466/64 and for the next 18 years he and his fellow inmates, including Walter Sisulu and Ahmed Kathrada, lived in austere conditions and worked in the lime quarry.

Mandela completed his law degree during this time, through correspondence with the University of London. Such was his reputation even in prison that the university accepted his nomination for chancellor in 1981, but the famous prisoner lost the post to Anne, the Princess Royal.

Mandela was transferred to the maximum-security Pollsmoor Prison in Cape Town in 1982 and then to the low-security Victor Verster in 1988, where he spent the last three years of his 27-year incarceration. Here he was able to receive visitors, and lived in a comfortable warder’s house in the compound.

Some time after his release, Mandela built a house in Qunu in the Eastern Cape, the place of his birth. The building is an exact replica of the prison house because, with his hectic schedule after release, Mandela missed the solitude of the prison environment and the opportunity to reflect, and thereby to make fewer mistakes. This is according to his daughter, Zindzi.

Since the early 1980s, unknown to the majority of South Africans, Mandela and other anti-apartheid fighters had been negotiating with the South African government, then under the leadership of the late PW Botha.

Botha wanted Mandela to renounce his anti-apartheid principles and give up the armed struggle, and in 1985 offered him freedom on this basis. Mandela turned the offer down, saying that only a free man could negotiate.

Between 1985 and 1990, and under intense local and international pressure, Mandela and the government – mainly then justice minister Kobie Coetsee – held a number of meetings, which laid the foundation for what was to come.

In a television interview, Coetsee, who died in 2000, said that before he met Mandela, the image in his mind was one of a man who wanted to seize power at all costs. At their first meeting, which took place in a hospital where Mandela was recovering from prostate surgery, Coetsee took an immediate liking to the prisoner.

“We met as though it was not the first meeting, it was one of many other meetings,” he said. “It did not bear the stamp or even appearance of a meeting between … warder and prisoner. Perhaps, it was a meeting between friends that had known each other for a very long time.”

But it was only in 1989, when FW de Klerk took over as president from Botha, who had suffered a stroke, that tangible progress was made. De Klerk startled the country by announcing Mandela’s release on 2 February 1990, saying that a negotiated settlement would end apartheid, all liberation movements would be unbanned and all political prisoners released.

Nine days later Mandela walked out of Victor Verster prison, his then wife Winnie holding his hand tightly, and his fist raised in the liberation movement salute. He was whisked off in a motorcade to Cape Town to stay at the home of Archbishop Emeritus Desmond Tutu, and appeared later that evening on the balcony of the Cape Town City Hall, where he spoke to an elated crowd of about 50 000.

Despite suggestions that he make his first speech as a free man in his former home town of Soweto, Mandela chose Cape Town as he had lived there for the past 27 years.

“Your tireless and heroic sacrifices have made it possible for me to be here today,” said Mandela, addressing the crowd. “I therefore place the remaining years of my life in your hands. On this day of my release, I extend my sincere and warmest gratitude to the millions of my compatriots and those in every corner of the globe who have campaigned tirelessly for my release.”

He added that although the land was not yet free from oppression, “We express the hope that a climate conducive to a negotiated settlement would be created soon, so that there may no longer be the need for the armed struggle.”

In 1994 Mandela became the first South African president to be chosen by a fully representative electorate, a position he held for just one term.

Unrest and even bomb blasts leading up to the event could not stop the country’s millions of previously disenfranchised citizens as they stood for hours in winding, kilometre-long queues, to cast their vote in South Africa’s first democratic election.

That day, 27 April 1994, is today celebrated in South Africa as Freedom Day, a public holiday.

In 1993, for their work in taking South Africa from the brink of civil war to long-awaited democracy, De Klerk and Mandela shared the Nobel Peace Prize.

In 2007, for Mandela’s 90th birthday, a 460kg bronze statue was unveiled outside the gates of Drakenstein. The statue, depicting Mandela with his fist raised up as it was on 11 February 1990, was a gift from the Sexwale Family Foundation, and was created by sculptor Jean Doyle.