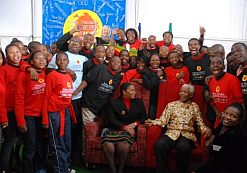 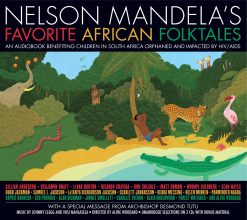 The audiobook is available as a CD or a
digital download. (Image: Nelson Mandela’s
Favorite African Folktales ) 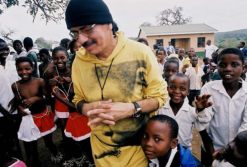 Former president and Nobel Peace laureate Nelson Mandela has lent his name to a newly released audiobook of African folk tales. The production features some of the world’s most acclaimed actors reading beloved stories from the continent.

Launched in July 2009, Nelson Mandela’s Favorite African Folktales is a project of the non-profit Los Angeles-based Artists for a New South Africa (Ansa) organisation. The beneficiaries are the thousands of children in South Africa who have been orphaned or otherwise affected by HIV and Aids.

Proceeds from sales of the audiobook go to the Nelson Mandela Children’s Fund and Ansa’s It Takes a Village programme. The project helps Aids orphans and vulnerable children in South Africa by strengthening the capacity of their communities to take care of them, enabling them to remain with their families and grow up in their own environment.

The list of celebrities who have given their time and talent to the project is mouth-watering, but writers, illustrators, legal and technical staff, and others have also donated their services.

Woodard also directed the production. She was in London in 2008, where she met with Mandela.

“He challenged us,” she said. “He told us, ‘… our work is far from complete. Where there is poverty and sickness, including Aids, where human beings are oppressed, there is more work to be done. It is in your hands now.'”

Oscar nominee Jackson said, “I’ve travelled with Ansa to rural villages and met children whose lives will be changed by this audiobook. This is our way of honouring Mr Mandela, by assisting children who are the future of his nation and our world.”

A special message for children

South African music icons Johnny Clegg and Vusi Mahlasela composed and recorded original music for the audiobook, which was engineered by Grammy winner Gavin Lurssen. The production includes a special message to the children of the world from Archbishop Emeritus Desmond Tutu, also a distinguished recipient of the Nobel Peace Prize.

The stories were all personally chosen by the former statesman, who celebrates his 91st birthday on 18 July. Mandela has all but retired from an active public life and 67-year-long political career, but still finds time to address important issues through The Elders. This is an independent group of respected global leaders who lend their collective experience to initiatives that build peace and promote human rights.

The print version was first published in 2002 and featured 32 stories from all parts of the continent. The clever snake charmer from Morocco, the Kenyan lion Simba, the Southern African mantis and the moon, the trickster-spider Anansi from Nigeria, and the Swazi cloud princess are just a few of the much-loved characters in stories so old that their exact origins are unknown.

In the book’s foreword, Mandela wrote of his wish that storytelling in Africa would never die, but rather that all the world’s children might experience the wonder of books.

The oral tradition of storytelling has been handed down through many generations in Africa. Now the oral tradition has gone digital and it is the hope of all involved that children all over the world will delight in and learn from the audiobook.

Lending talent for a good cause

Artists for a New South Africa, previously known as Artists for a Free South Africa, was established in 1989 by Alfre Woodard, Danny Glover, Mary Steenburgen, Robert Guillaume and several other artists who were involved in the anti-apartheid struggle.

Today the organisation focuses its efforts on combating HIV and Aids, educating and empowering people, and entrenching democracy in South Africa.