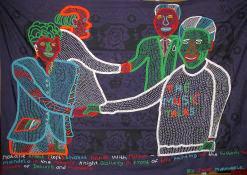 Beaded artwork by the husband and wife team Billy and Jane Makhubele.

A photograph of Natalie Knight and Nelson Mandela at her art studio in 1993. 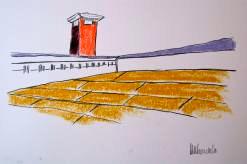 One of the highlights of the exhibition is a lithograph, titled Tennis Court, by Mandela himself. 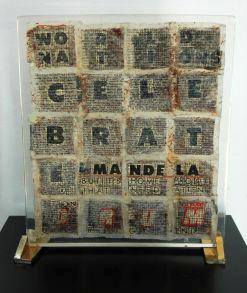 Susan Woolf’s conceptual pieces in the Towards Mandela series made of newspaper clippings, teabags and resin. 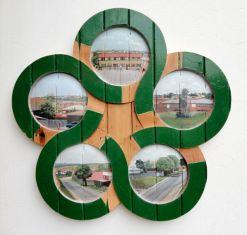 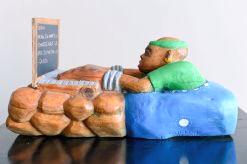 Ahead of Nelson Mandela International Day on 18 July, art is being used to celebrate the life of South Africa’s iconic former president and anti-apartheid activist in his 94th year, and tell the story of a life dedicated to the struggle for freedom.

Unlike speeches, films or awards, the beauty of art is in the detail and individual artistic representations that have captured the story of Mandela, at all stages, over many years.

Natalie Knight, art curator of the Mandela @ 94 _ z _a exhibition, now open to the public at the Origins Centre at Wits University in Johannesburg, says that the artworks on show do just this.

They tell Mandela’s story from his rural beginnings, his life of poverty in Alexandra township and his home in Soweto, to his days as a lawyer and as an accused, his suffering in prison and his triumph of becoming the country’s first democratically-elected president.

The Mandela @ 94 _z _a exhibition consists of paintings, sculptures, photographs, cartoons, beadwork and prints created by artists from various cultural backgrounds. The 20 participating artists are all South African, with the exception of Blanchard Magu from the Ivory Coast.

Knight says one of the most remarkable aspects about artists’ representations of Mandela over the years is that they have been overwhelmingly positive.

“The common denominator among the exhibiting artists is their admiration and respect for a leader who has made South Africans proud,“ she says.

“Through their artworks they have captured the spirit of a man who embodies the desire for peace, justice and reconciliation.”

She says this is why the exhibition is so captivating. “Everyone has a different experience of Mandela.”

She recalls her own experience of meeting the renowned struggle icon.

“My first interaction with Nelson Mandela was when he walked into the Natalie Knight Gallery in the Hyde Park Corner shopping centre in 1993,” she says. “I was in the middle of a photo shoot.”

She also remembers what he was wearing. “He was wearing his broad, friendly smile and a casual sweat shirt with the words – The Music Talks.”

Knight showed Mandela a pastel drawing by artist Tommy Motswai, of the historic handshake between FW de Klerk and himself. The photographer asked if Mandela would shake hands with Knight in front of the drawing.

“He obliged and then shook hands with the other 15 members of my staff as well,” she says. “His bodyguards were getting restless and possessive but Madiba brushed them aside.”

Years later the photograph became the source material of a beaded artwork made by the husband and wife team Billy and Jane Makhubele. This is one of the works on show at the exhibition.

The pair created artworks from photographs published in newspapers of important events in Mandela’s life – including the day of his release from Robben Island and his wedding to Graça Machel – using beads and safety pins on traditional Shangaan fabric.

One of the highlights of the exhibition is a lithograph, titled Tennis Court, by Mandela himself.

The lithograph is one of a collection of artworks by Madiba which appeared in The Robben Island series II. The series was sketched and completed by the Nobel laureate between March and June 2003. It consists of 21 charcoal sketches of images that he found meaningful during his incarceration on the island.

The tennis court came into existence when prisoners asked officials if a courtyard at the prison could be converted so that they could get more exercise. Before this, prisoners were only marched round the courtyard for half an hour every day.

“Our persistence paid off and we painted the cement courtyard surface to create a traditional tennis court layout,” Mandela explains in the book. “Strangely, Robben Island was the first opportunity for me to play tennis since university … it was a strange sensation enjoying such civilised hobbies in such an uncivilised place.”

Knight says that this particular work’s simplicity is what makes it so striking.

Various pieces by conceptual artist Susan Woolf are also on show. Woolf is an accomplished South African artist and one of her more recent projects depicting taxi hand signs were accepted for a national stamp series in 2010.

Stampnews.com also chose Woolf’s taxi hand sign stamps as one of the top 10 most important stamps in the world in 2010.

Her conceptual pieces in the Towards Mandela series were made of newspaper clippings, teabags and resin.

Woolf says she collected newspaper articles about Mandela for many years, and when she moved into her new studio she wasn’t sure what to do with them. “I thought that I just can’t let go of the clippings and I wanted to find a way to preserve them,” she explains.

She decided to set the clippings in used rooibos teabags. The use of rooibos teabags is significant as it relates to Mandela’s years in prison. Before it became popular, rooibos was considered a cheap tea and was often only deemed suitable to serve in prisons.

Every teabag, complete with tea grains, contains inscriptions by Woolf. “I just recorded my thoughts of the moment on them, often while waiting for my children when I was picking them up at school.”

Knight also included unusual circular paintings by Joachim Schonfeldt. The round hand-painted scenes on hollowed-out sections of wooden doors depict Mandela’s life in the townships. “The artist bought ordinary doors, then carved circles in them and in each carving painted a site where Mandela lived,” she explains.

Schonfeldt is also known as one of the founders of the Bag Factory Artists Studios in Johannesburg, one of the first collective studio spaces for visual artists in the country.

Sculptor Johannes Maswangnayi produced images in wood of Mandela at different times of his life. His son Collen exhibits a thought-provoking sculpture entitled Fruits of Freedom, which questions whether Mandela’s long walk to freedom has borne fruit.

Knight says that Collen Maswanganyi’s small painted sculpture of a Shangaan woman wearing traditional clothes and sending a Facebook message to Madiba on his 94th birthday straddles the cultural divide.

In the exhibition’s name Knight also tried to include elements of social media and the internet by using references to emails, Twitter and instant messages. But the abbreviation “ZA” signals that it is very much a local exhibition.