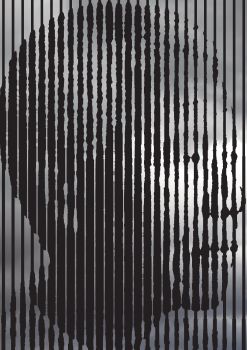 Fifty steel poles by artist Marco Cianfanelli make up Mandela’s face, at the place where he was arrested 50 years ago near Howick, KwaZulu-Natal. 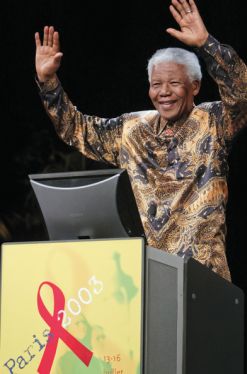 Mandela at the second International AIDS Society conference in Paris. 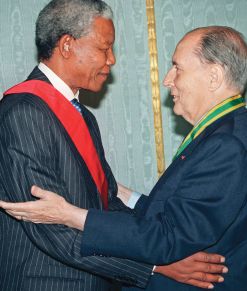 Nelson Mandela is travelling to Europe this year – multiple images of the icon will appear in Paris from 29 May to 6 July as part of the France-South Africa Seasons 2012 and 2013.

“Produced by the highly regarded Apartheid Museum in Johannesburg, in association with the Nelson Mandela Foundation, the exhibition will celebrate Mandela’s relationship with the people of France, while offering a comprehensive historical overview of his epic life and times,” reads a statement from the museum.

Just a couple of months off his 95th birthday in July, Mandela will be revealed in all his guises, in a multimedia exhibition titled Nelson Mandela – from Prisoner to President.

“The exhibition attempts to breathe fresh life into a story that has been well told in many books, documentaries and other tributes around the world,” says Christopher Till, director of the Apartheid Museum, which put together the original exhibition titled Mandela – Leader, Comrade, Negotiator, Prisoner, Statesman in 2009.

“We are delighted to present the exhibition Nelson Mandela: from Prisoner to President as one of the highlights of the opening week of the South African Season in France,” says Bongani Tembe, South African commissioner-general for the Seasons. The exhibition will be held at the Hôtel De Ville in Paris.

Till adds: “The strength of the exhibition is the way it attempts to provide a layered glimpse of Mandela in all his various guises and reincarnations. It examines his undoubted strengths and greatness, but does not shy away from his self-acknowledged weaknesses too.”

The exhibition will trace how Mandela built a new nation from the fragments of conflict, making full use of his strengths: love, persuasion, forgiveness and acute political acumen, “with a fair amount of self-deprecating humour sprinkled in for good measure”.

The France-South Africa Seasons sees the successful cultural exchange programme, which has taken place between France and Vietnam, Croatia, India, Russia and Brazil, come to sub-Saharan Africa for the first time. The Seasons’ aim is to foster a deeper mutual understanding and respect for the cultures of partner countries.

Events will run between May and December and will include contemporary art; architecture, theatre, political discussions, literature, gastronomy, astronomy, and sport, among others. These events will be staged in towns and cities across France, such as Paris, Lyon, Bordeaux, Nantes, Saint-Malo and Strasbourg.

More than 800 South African artists, musicians, dancers and actors will be flying to France and performing in 250 dance and theatre productions, 50 films, 100 music concerts, 35 workshops, 30 exhibitions and 40 residencies. Some 150 South African wines will help to sweeten bilateral relations.

During the opening week of the season, from 28 May, the Eiffel Tower will be illuminated in the South Africa flag. This will be repeated from 15 to 21 July, to coincide with Mandela’s birthday on 18 July.

The Mandela exhibition follows in the footsteps of the former president – from his early life in the hills of the Transkei where his family had lived for generations, living a modest pastoral life, to his mission schooling, his entry into manhood and his first brush with and defiance of authority.

It tells of his move to Johannesburg, his studying to be a lawyer, his political education, and his passion for fighting apartheid. He was one of the accused in the Treason Trial, but was eventually acquitted.

His powerful oratory and leadership skills helped him to quickly move up the ranks in the African National Congress (ANC), and soon he was an underground fighter championing the armed struggle, as the notorious “black pimpernel” hunted by the apartheid police.

The exhibition traces Mandela’s dramatic arrest in 1962 while driving a car – disguised as a chauffeur – back to Johannesburg after reporting on his overseas mission to Chief Albert Luthuli, then ANC president and a Nobel Peace Prize laureate. A maquette of a recently installed sculpture to mark the 50th anniversary of his arrest near Howick in KwaZulu-Natal, will also be on display

Mandela was in prison on Robben Island when the top echelons of the ANC were arrested at Liliesleaf Farm on the northern outskirts of Johannesburg, in 1963. He was transported to Pretoria to stand trial, and was sentenced to life imprisonment with the top brass of the movement, and taken back to Robben Island.

Then he disappeared from public view for 27 years, until his unconditional release in February 1990.

The apartheid state, facing crippling economic and political isolation and unrest in the black townships, began a secret dialogue with Mandela. These events are shown in dramatic film footage in the exhibition, and include the resultant unbanning of all the resistance movements by the government. His release and first public address to South Africans are on exhibit.

Four years of at times tense negotiations took place before Mandela took office in 1994 as the first democratic president.

“The chapters in this long walk from prisoner to president are presented in an exhibition of 70 panels, between 3m and 9m long and 2.2m high, which graphically illustrate the life and times of Nelson Mandela and are organised on the basis of six themes: Character, Comrade, Leader, Prisoner, Negotiator and Statesman,” indicates the museum’s statement.

Photographs, many of which have not been widely seen before, have been juxtaposed with the narrative describing the events linking all of these aspects of his life. Ten screens featuring historical film clips of Mandela commenting and speaking on the issues of the time are woven into the exhibition.

A representation of his Robben Island cell, measuring 2m x 2.5m, in which he was incarcerated for 18 years, will be created.

What is extraordinary about the exhibition is that it “seeks to show Mandela the human being, who acknowledges his shortcomings and sees himself as a single part of a much larger movement with many players who dedicated themselves to freeing South Africans from oppression, discrimination and prejudice in achieving the dream of justice and equality”.

Nelson Mandela – from Prisoner to President was first developed and presented by the Apartheid Museum in Johannesburg in 2008 to mark and celebrate his 90th birthday. Smaller versions of the exhibition have been erected in Umtata in the Eastern Cape, and Pretoria in Gauteng. It has also travelled to Argentina and Sweden.