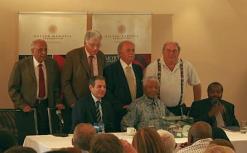 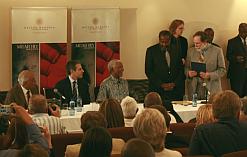 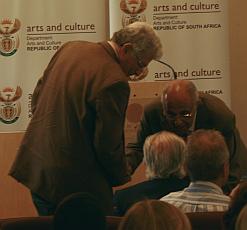 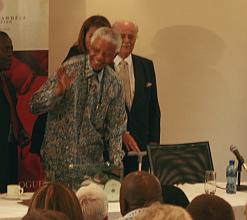 The Nelson Mandela Foundation and the National Archives have taken delivery of vital documents relating to the writing of Mandela’s autobiography Long Walk to Freedom and the historical Rivonia Treason Trial respectively, in the presence of Madiba himself.

At a ceremony on 29 November 2008 at the offices of the Nelson Mandela Foundation, Arts and Culture minister Pallo Jordan received records from the Rivonia Trial from their previous custodian, De Beers Group chair Nicky Oppenheimer.

At the same time, the Nelson Mandela Centre of Memory took possession of 100 hours of recorded conversations made during the writing of Long Walk to Freedom. The collection was handed over by former Rivonia Trial accused Ahmed Kathrada and Time magazine’s managing editor Richard Stengel, who worked with Mandela for almost two years on the book.

Chair of the Foundation and eminent linguist Professor Jakes Gerwel presided over the occasion, which brought together not only Mandela and Kathrada, but also other surviving treason trial participants including fellow accused Denis Goldberg and distinguished defence lawyers George Bizos and Arthur Chaskalson.

“The prosecution documents are a vital part of the Rivonia Trial, which is such a seminal event in South Africa’s history that it was entered into the Unesco Memory of the World register in 2007,” said Gerwel, adding that still today much of the documentation is missing.

In 2009 funds from Unesco will provide for a worldwide audit so researchers working on the project can investigate exactly how much documentation still exists, and where it is held.

The Rivonia Treason Trial was so named because it resulted from a raid by South African police on the farm Liliesleaf in Rivonia, near Johannesburg, on 11 July 1963. Resistance leaders from the African National Congress were evading the security police on the farm – Mandela himself lived there masquerading as a gardener and cook called David Motsamayi (“the walker”). He was already in custody when police swooped on Liliesleaf, and joined his fellow accused later for the trial.

Chief prosecutor Dr Percy Yutar kept a valuable bundle of papers that included a handwritten Mandela diary, a transcript of the trial, Mandela’s four-hour speech delivered from the dock, and a number of photographs. He later attempted to get rid of these collected papers, and others, by putting them on sale to the highest bidder. “This archival heritage is now coming home,” said Gerwel.

Accepting the priceless papers, Jordan noted the significance of the month of November in South African democracy, saying that the Rivonia Trial began almost to the day 45 years before, and a decade previously then-president Nelson Mandela received the first interim report of the Truth and Reconciliation Commission from its chair, Archbishop Desmond Tutu.

“One of the mysteries of the Rivonia Trial is the fate of its full body of documentation,” said Jordan. “The defence team secured its records against raids by the security police, and we do have some of this documentation in libraries at Wits University and in the UK and other countries.”

He mentioned that the prosecution team under Yutar collected copious documentation which should, by law, have been transferred to the National Archives within 30 years of the end of the trial.

“However, Dr Yutar took a somewhat elastic view of the notion of public property,” said the minister wryly, “and in the 1990s the documents went on sale on the open market. Nelson Mandela decided not to prosecute his former prosecutor, and fortunately Harry Oppenheimer intervened to keep the records within South Africa.”

Nicky Oppenheimer described the Rivonia trial as a seminal event in South African history that changed the world’s perception of what was really going on in the country and mobilised huge international support for the defendants.

“My father [the late Harry Oppenheimer] was determined that Yutar’s papers should not leave the country,” said the younger Oppenheimer, “and he bought them for his Brenthurst Library of Africana. My sister [Mary Slack] and I are now proud to pass the papers to the National Archive.”

Jordan said he hoped that the example set by the Oppenheimer family would inspire others, whether locally- or internationally-based, who may have purchased trial documents, to return them to the state. “Humanity can only gain by looking the past squarely in the face. We thank the Oppenheimers on behalf of a grateful nation.”

Kathrada and Stengel handed a collection of audio conversations with Mandela to the Foundation’s Centre of Memory. The conversations, made by the trio in the early 1990s, were part of the preparation for the best-selling Mandela autobiography Long Walk to Freedom, and have lain in storage for over 10 years.

“The tapes are a unique archive of Madiba’s often intimate engagement with his own memory,” said Gerwel, “and it is fitting that an archival institution such as the Foundation should take care of them, process them, transcribe them, digitise them, and make them available to everyone. They belong, as a resource, to the world.”

Stengel, who was in South Africa in December 1992 to meet with Mandela, described the months leading up to South Africa’s first democratic elections as “perilous”. “I had to wait a few weeks to see Mandela but it was worth it,” he said. “This is the man who, I believe, paved the way for Obama. He grasped history by the lapels and shook it, and it is the greatest privilege of my life to have worked with him.”

Long Walk to Freedom, added Gerwel, will be read as long as there are people who believe in justice, equality, fairness and kindness.