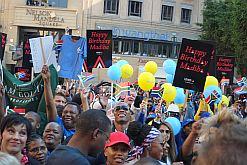 Hundreds of South Africans came
together in Johannesburg to record
a birthday song for former president
Nelson Mandela, who turns 94 on 18 July. 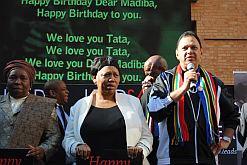 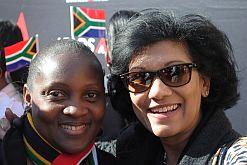 Nelson Mandela will have a pleasant surprise a month before his 94th birthday when visuals of the video, in which South Africans from various facets of society sing happy birthday to him, goes viral.

The father of South Africa as a democratic state was serenaded for his upcoming birthday – on 18 July – at the Nelson Mandela Square in Sandton, north of Johannesburg, on 29 May 2012.

This initiative by Lead SA, the Department of Basic Education and the Shout Foundation was supported by Brand South Africa, as well as the Nelson Mandela Foundation and Proudly SA. It brought together a crowd of over 400 people to record a birthday song for Madiba, as Mandela is affectionately known.

Present at the event were basic education minister Angie Motshekga, Nkosazana Dlamini-Zuma, the minister of home affairs; Anitha Soni, trustee of the board of directors at Brand South Africa; and musicians, TV personalities and sports stars.

Lead SA’s Yusuf Abramjee said: “Thanks to all the South Africans from all walks of life who took their time to join us and sing to our wonderful Madiba.”

The recording of the song will go viral on 18 June 2012, a month before his birthday.

Watch the video footage of the Madiba birthday song event.

Moss Mashishi, former president of the South African Sports Confederation and Olympic Committee, said: “If you consider how Madiba is a world icon and how he has helped the brand called South Africa then this is just a good gesture from us to tell our hero that we love him and wish him a happy birthday.”

Young and old were in attendance and made sure they lent their voices to the recording by singing loudly and filling Nelson Mandela Square with joyful ululating.

Mpho Selepe, from Orlando in Soweto, said: “I work in Melrose but I had to come and be part of this great initiative for an icon.”

South Africans need no second invitation to gather for a cause, as they did in Nelson Mandela Square, in a spirit of camaraderie.

Soni said: “This is just wonderful, giving South Africans an opportunity to come together and they’ll never cease to amaze you – happy birthday, Madiba.”

Soni was reiterating the fact that South Africans can put aside other things happening in the country when asked to rally together – another such occasion was when thousands gathered in the same location to give the Springboks, South Africa’s national rugby team, a memorable send-off to the 2011 Rugby World Cup in New Zealand.

Turning 94 after becoming president in 1994

Lesley Sedibe, CEO of Proudly SA, said: “We are celebrating a man who, when he came out of prison, brought South African together through his own humility when naysayers thought that South Africa was on the brink of collapse.

“This one is very special as Madiba turns 94 and he became the first democratically elected president of South Africa in 1994.”

Mandela was inaugurated as president of South Africa on 10 May 1994, after the country’s first free general election had taken place on 27 April. The latter date is now commemorated as Freedom Day in South Africa.

Dlamini-Zuma said: “Your presence here shows just how much Madiba is loved and we welcome it. We are calling on all South Africans to take 67 minutes of their day to do good on his birthday.”

She was referring to the annual International Mandela Day, proclaimed in 2009 by the UN General Assembly. On this day, 18 July, people across the globe are urged “to take action to help change the world for the better and, in doing so, build a global movement for good”.

They are urged to take just 67 minutes of their lives to contribute to making the world a better place for the next person.

In South Africa, International Mandela Day was launched on 23 May 2012 at Tlhatlogang Junior Secondary School in White City Jabavu, Soweto.

Here, singer Danny K, rapper and presenter ProVerb, model and presenter Bonang Matheba and fashion designer Gert Johan Coetzee painted the walls of two container classrooms at the school. They were joined by officials from the UN Information Centre as well as employees of several large corporates.