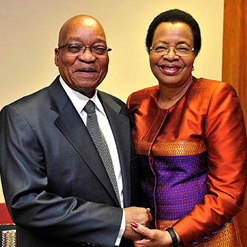 South African President Jacob Zuma with Graça Machel, Nelson Mandela’s wife, at the launch of the Nelson Mandela Centre of Memory in Johannesburg. 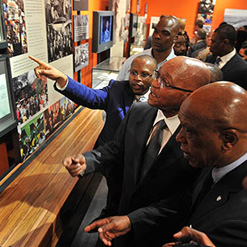 Government leaders, business people, veterans of the struggle against apartheid and celebrities gathered at a high-profile event in Houghton, Johannesburg on Monday 18 November to launch the new Nelson Mandela Centre of Memory, a priceless historical collection of resources chronicling the life of South Africa’s greatest statesman.

President Jacob Zuma addressed the launch, saying the new space housed some of the most important documents on the founding of a democratic South Africa. “These resources are part of the liberation heritage, the nation’s heritage, and they need to be preserved.”

The centre is a milestone achievement for the Nelson Mandela Foundation, Zuma said, and bears testament to Mandela’s vision.

The date of the launch of the Centre of Memory marked the 20th anniversary of the adoption of South Africa’s Interim Constitution on 18 November 1993, when the groundwork for a non-racial and fully democratic South Africa was laid for the first time. The new document paved the way to the country’s first democratic elections on 27 April 1994.

“Housed at this centre are some of the most important heritage resources that chronicle the life and times of the founding father of our democratic nation and our icon, Tata Nelson Rolihlahla Mandela,” Zuma said.

The president expressed his appreciation to the Nelson Mandela Foundation for the work that had gone into conserving the legacy of the struggle.

“We take this opportunity to thank the Nelson Mandela Centre of Memory for the excellent work they are doing in preserving part of our nation’s heritage,” he said.

“Through your work, you are making a major contribution towards integrating our liberation heritage into our nation’s cultural heritage. The resources housed at this centre form an integral part of defining where we come from as a nation. They also help in articulating the kind of society we seek to build; a national democratic society that is united, non-racial, non-sexist, democratic and prosperous.

“They tell an important part of the South African story; a story of a people that have overcome adversity; many years of division and conflict and have today joined hands in building a shared and prosperous future.”

At the event, Zuma announced that a statue of Nelson Mandela will be unveiled at the Union Buildings in Tshwane in December, to mark the centenary celebration of the buildings.

Sello Hatang, chief executive of the Nelson Mandela Foundation, told the gathering that it is South Africans’ responsibility to continue the journey Mandela laid out for us.

“Today marks a quintessential change for us,” he said. “Of course, Madiba stopped using his office in 2010, but today finally the building itself has been refurbished with a mandate beyond that of a most-presidential office.

“This building is now a public facility – an integrated resource on the life and times of Madiba, a place where his legacy is open to interpretation and where we will convene dialogue on critical social issues and drive social change.”

Hatang explained that the new facility was for all people to play a part and build a legacy together. South Africans, he said, must open the Mandela legacy up to interpretation, and convene dialogue on critical social issues. “We are responsible for the ghosts who bought us freedom, for those who struggled for justice, and we need to continue the struggle for those not yet born.”

Tokyo Sexwale, chair of the Nelson Mandela Foundation Resource Mobilisation Committee, emphasised Mandela’s role as a peacemaker. “This is a house of reconciliation and dialogue, a place where different parties can come together and discuss pertinent policy issues.”

Sexwale thanked the Nelson Mandela legacy champions: the government of India, the Rockefeller family, Vodacom, the Motsepe family, former US President Bill Clinton and the Sexwale Family Foundation. They, in partnership with the National Lottery Distribution Trust Fund, helped facilitate and fund the refurbishment of the Centre of Memory building.

Chairperson of Nelson Mandela Foundation, Professor Njabulo Ndebele, said South Africans are a nation built on a foundation of elders, propelled on by the youth.

“If a legacy is something you leave behind, it also demands of you to visualise in the future the impact of what you wish to leave behind,” he said. “This means you need a memory of the future as well. Memory is not only about the past, it is about envisioning the future and retaining that memory.” 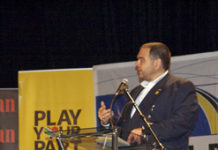 Brand South Africa Dialogue on health in the Eastern Cape