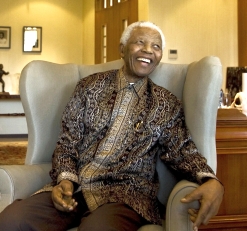 A new book that features writings in former president Nelson Mandela’s own hand has been released internationally in 20 languages, from Turkish to Catalan. The book is available in stores and online from 12 October 2010.

Conversations with Myself was compiled by the Nelson Mandela Foundation’s Centre of Memory and Dialogue from priceless material held in the elder statesman’s personal archives.

Here the reader will get a glimpse of the man behind the leader and international icon, from previously unavailable material such as private recorded conversations, journal entries, interview transcripts and draft speeches

The 344-page Conversations with Myself includes notations on desk calendars, interviews, and letters written to his family during Mandela’s 27 years of imprisonment, 18 of them spent on Robben Island.

The book also features an unfinished sequel to his best-selling autobiography Long Walk to Freedom, which was co-written with Time managing editor Richard Stengel.

“Here he is making notes and even doodling during meetings,” says a statement from the Nelson Mandela Foundation, “or recording troubled dreams on the desk calendar of his cell on Robben Island; writing journals while on the run during the anti-apartheid struggle or conversing with friends”.

Neither an icon nor a saint

The book, says the foundation, shows the former president, now 92 years old, to be neither an icon nor a saint, but a person just like everyone else.

The foreword was written by US President Barack Obama. “Nelson Mandela reminds us that he has not been a perfect man,” wrote Obama. “Like all of us, he has his flaws. But it is precisely those imperfections that should inspire each and every one of us.”

“You have publicly said that you should not be treated as a saint,” concurred struggle veteran Ahmed Kathrada, who was present when an advance copy of the book was placed into Mandela’s hands in August 2010. “Because you’ve got shortcomings like all human beings have … but this here is in your own words.”

Kathrada added that the publication was unprecedented, because much has been written about Mandela in his home country and elsewhere in the world, but there’s hardly anything available in his own words.

“A little more than two decades after I made my first foray into political life and the divestment movement as a college student in California, I stood in Mandela’s former cell in Robben Island,” said Obama in the foreword. “I was a newly elected senator. By then, the cell had been transformed from a prison to a monument to the sacrifice that was made by so many on behalf of South Africa’s peaceful transformation.”

Obama wrote that he tried to put himself in the place of the person with that famous prisoner number 466/64, to imagine what it must have been like for him. “I tried to imagine Mandela – the legend who had changed history – as Mandela the man who had sacrificed so much for change. Conversations with Myself does the world an extraordinary service in giving us that picture of Mandela the man.”

Published in South Africa by Pan MacMillan, Conversations with Myself is available in hardback, as an audio book, and from amazon.com as a Kindle ebook. Sales of the book will benefit the Nelson Mandela Foundation.