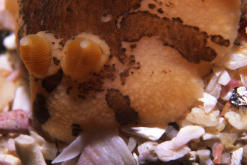 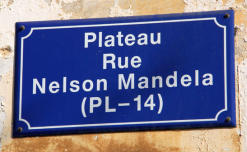 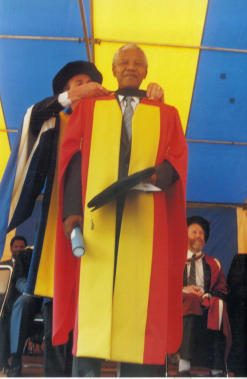 Wits University bestowed an honorary doctorate on Nelson Mandela on 6 September 1991 – but the institution is not the first to honour him thus.
(Image: Wits University) 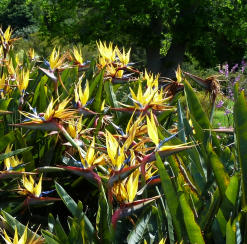 It’s not only South Africa that has a penchant for naming things after former president Nelson Mandela – there are numerous streets, bridges, educational institutions, buildings, organisms, flowers, statues and monuments around the world that bear his name.

With the help of the Nelson Mandela Centre of Memory, we bring you a far from exhaustive list of some of the places where Mandela’s name can be found.

But in Purmerend, Zoetermeer and Arnhem, all in the Netherlands, residents there have their own Mandela Bridges, as do the people of Utrecht, Belgium.

And just as Bloemfontein residents have their Nelson Mandela Drive, so do the people of Castries, St Lucia, in the Caribbean. In Paris, France, pedestrians can stroll along the Avenue du President Nelson Mandela in Arcueil, located in the city’s southern suburbs, while there is a Nelson Mandela Boulevard in Caracas, Venezuela.

Dakar in Senegal boasts the Avenue Nelson Mandela, and there are more Mandela Avenues in Glamorgan, Harlow and Falkirk, UK; Georgetown, Guyana; and Schrijndel, Netherlands, as well as a Mandela Road in Culemborg, Netherlands, and Uyo, Nigeria.

The UK has several versions of Mandela Close and Mandela Way respectively, and there is a Mandela Highway leading into Kingston, Jamaica. Not to be outdone, the authorities in Dar es Salaam, Tanzania, have established the grandly-designated Nelson Mandela Highway Road, and there are Mandela roads, places, paths, parkways, interchanges, links, courts and streets all around the world.

In Italy, there is a municipality or comune named Mandela, situated in the province of Rome, about 40km northeast of the Italian capital. A few cities have named stadiums after Mandela – besides the Nelson Mandela Multipurpose Stadium in Port Elizabeth, there’s one in Port Louis, Mauritius; in Kampala, Uganda; and in Torrevieja, Spain.

For those who want to do their own long walk while remembering the elder statesman, the Madiba hiking trail in the Eastern Cape passes through his home town of Qunu. The Mandela Garden in Leeds, UK, as well as the Nelson Mandela ornamental garden in Kingston-upon-Hull, Yorkshire, UK, the Nelson Mandela Park in Montreal, Canada, and Mandela Park in Hoorn, Netherlands, offer a chance for peaceful contemplation.

You can even wine and dine in his presence by proxy, at the Café Mandela in Copenhagen, Denmark, the Mandela Bar at Bristol University, or Madiba Restaurant in New York, which has served up peace and love since 1999.

Mandela’s former wife Winnie has not been left out – in 1983, the New York City square in front of South Africa’s UN mission became the Nelson and Winnie Mandela Plaza.

Port Louis, Mauritius; New Delhi, India; Rio de Janeiro, Brazil; The Hague, Netherlands; Tunis, Tunisia – it seems unlikely that any other world icon has so many tributes in so many places.

Mandela’s passionate belief in education is reflected in a long list of schools, scholarships, programmes, awards, libraries, centres, chairs, bursaries and funds – not just in South Africa or even the continent, but far beyond.

The Australian High Commission in South Africa awards 20 Australia Mandela scholarships annually, given to academic staff who wish to study for their masters’ degrees at Australian institutions. At the University of Michigan, the Dubois-Mandela-Rodney postdoctoral fellowship is given to scholars studying Africa or the African diaspora.

A Mandela scholarship fund administered by Leiden University in the Netherlands offers African postgraduate students the chance to study for a year at the university. The Mandela Rhodes Foundation supports the development of leadership capacity in Africa.

Needless to say, Mandela himself has been the recipient of numerous awards, honorary degrees, life memberships, civic honours, freedoms of towns and cities, and various other accolades. According to the Mandela Centre of Memory, the statesman has collected more than 1 100 of these honours over the years.

They include the Nobel Peace Prize in 1993, which he won jointly with then-president FW de Klerk, and an honorary doctorate in liberal arts from Chulalongkorn University, Bangkok, Thailand, in 1997. He can also add the Civil Order of the First Class from the Sultanate of Oman (1999), the Order of the Lion of Malawi (2001), the freedom of the city and county of Cardiff, Wales (1998), and honorary citizenship of Canada (2001) – the first time in history that the honour was given to a living person – to his list, as well as hundreds more.

There are a host of living creatures, organisms and plants named after the former president, such as Protea cynaroides Mandela, which was revealed in 1988 as an 80th birthday present; Triacanthella madiba, a species of springtail named by scientists at Stellenbosch University; Australopicus nelsonmandelai, an extinct species of woodpecker named in 2012; an indigenous species of African orb-weaver spider named Singafrotypa Mandela in 2002; the Paravanda Nelson Mandela orchid, named in 1997; and the beautiful Strelitzia reginae Mandela’s Gold, named in 1996.

Some unusual offerings include a landfill site in Georgetown, Guyana, an apartment block in the long-running British television sitcom Only Fools and Horses, called Nelson Mandela House, and a fundamental nuclear particle discovered at Leeds University in 1973 and named the Mandela Particle.

Then there is the nudibranch, or sea slug, Mandelia Micocornata, named in 1999. However, this gesture was eclipsed by the naming of an entire family and genus of sea slugs after him – family Mandeliidae, genus Mandelia.

Poems, stamps, aircraft, racehorses, trees, gold coins and medallions named after him or bearing his likeness – there is seemingly no end to the respectful tributes bestowed on this symbol of reconciliation and forgiveness.