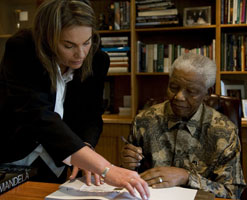 Zelda La Grange served the global statesman for 19 years, eventually calling Mandela her grandfather, or umkhulu. He was the one individual who made her a better person and a better South African, she had said.
(Image: Nelson Mandela Foundation/Alet van Huyssteen)

In many of the photographs of Nelson Mandela, there is a familiar blonde woman standing to one side, a quiet but unmissable presence. The woman is Zelda La Grange, Mandela’s personal assistant, private secretary and rock.

Her story is one that reflects the history of South Africa. She grew up with all the privileges of a white Afrikaner girl during the apartheid years, but underwent a personal transformation in the nineties when as a parliamentary typist, she went to work for one of the world’s most significant change-makers and the leader of a burgeoning democracy. Her relationship with Madiba, she has said, changed her profoundly.

Born in 1970, La Grange was a student in the volatile eighties, the height of apartheid repression. At a time when forced removals and resettlement were creating havoc in township streets, the state of emergency further encouraged the colour divide and ferocious oppression of non-white South Africans. Suffering indignity and humiliation daily, the majority of the country was on the verge of imploding.

Beating the odds of this violent, turbulent, shameful time in our history, a young white girl who initially harboured an irrational fear of black people became the black anti-apartheid stalwart’s closest confidante. Known as a Rottweiler and a general, she fiercely guarded Mandela at a time when anger ran rampant and South Africa was fearful of what this political transformation would mean.

She served the global statesman for 19 years, eventually calling Mandela her grandfather, or umkhulu. He was the one individual who made her a better person and a better South African, she has said. “Nelson Mandela inspired people to forgive, to reconcile, to care, to be selfless, to be tolerant, and to maintain dignity no matter what the circumstances. I can attest to each of these because these are the ways in which he changed my life over the past 19 years. I am blessed and honoured by the privilege to have had the opportunity to serve him,” La Grange said in her memorial following Mandela’s death on 10 December 2013.

A disciplined and dedicated individual, she who wore many hats while serving Mandela. She excelled in every department, even as she put it – and he agreed – as his “honorary granddaughter”.

Yet growing up, La Grange said, she was unaware of the precarious position South Africa was in and took little notice of apartheid. “In all honesty, I just knew there was a terrorist or a communist in prison and that it would mean the end of the country if he were released,” she told the British newspaper, The Guardian. “The influence of ‘my world’ brought an ingrained hatred, subconsciously, for the man and what he stood for, even though I did not know precisely what that entailed.”

Her parents, a butcher and a teacher, supported the ruling National Party and, on Sundays, they attended services at the local Dutch Reformed Church. “I was raised in a conservative environment in which black people were dangerous, a lower social class, and they were all terrorists!”

When Mandela was released, she said, “my dad remarked, ‘Now we’re in trouble’, and I immediately felt an irrational fear”.

Yet she has described her Calvinistic upbringing as protected and happy. Having an interest in the arts, she wanted to study drama, but her father advised her to pursue something else as acting was a difficult profession in which to survive. “He advised me to first do something that I could fall back on, and then go and study drama if I still wanted to. My father is a very realistic person and although I don’t like his advice 80% of the time, once again, he knew better,” she told The Guardian.

Though not entirely pleased, she heeded this advice and received a diploma in executive secretarial work. A few years later, a typist’s post was advertised in The Presidency and La Grange jumped at the opportunity. She was a typist for Mary Mxadana, at the time the private secretary of Mandela, by then the leader of the country. He was the first democratically elected president of the country, and served one term, from 1994 to 1999.

She spoke of her first introduction to Mandela, saying she was a nervous wreck and did not know what to expect of this man whom she had learned to fear. “I was on my way to the private secretary’s office and the president was on his way out. We bumped into each other and he inevitably began to chat. I just answered the questions politely and was very afraid of the tall black man. He put me at ease with his friendly chatting and the unreserved way in which he shook my hand.”

She added: “Shortly after I began working in the president’s office in 1994 I was shocked when I read the ANC’s Freedom Charter. They had already been striving in the 1950s for a non-sexist, non-racist society in which everyone could live together in freedom. I was completely confused and asked whether this was the reason that Mr Mandela went to jail. The answer, shortly, unfortunately, was ‘yes’.

“It made me realise that in spite of the fact that I was white, there was a place for me in the new South Africa, if these were the principles the new governing party had fought for. From the president’s actions, I quickly realised that the values of the Freedom Charter were also his own values, and that if you showed respect to your fellow humans you could resolve any disputes.”

As Mandela’s right-hand confidante, La Grange was frequently in the company of heads of state, dignitaries and celebrities, and she had unrivalled access to world leaders. It was a demanding position, and with no social life except her commitment to Mandela, La Grange said despite this, she felt so privileged to be working where she was.

“I often battled with the relentless pressure. But then I looked to him who carried himself with such grace and energy. Nelson Mandela did not demand loyalty, but he inspired profound and unwavering loyalty from everybody whose life he touched.” She had come a long way since Mandela was “a terrorist” in her eyes.

Visiting palaces and parliaments around the world Mandela would turn to La Grange as a sounding board, often speaking Afrikaans to her – her home language and one he had become accustomed to using during his years in prison. “It became a secret weapon. Whenever we were in a foreign country and he didn’t want people to know what he was saying or asking me, he would use Afrikaans.”

Mandela fondly referred to La Grange as Zeldina; on a state trip to Russia in 1999 he learned that president Boris Yeltsin’s wife was called Yeltsina, and it stuck. La Grange described her relationship with Madiba as that of a grandfather with his granddaughter, “but like it used to be between them in the old days – with unconditional respect”. It was within this context that the “grandfather” had a huge influence on his “granddaughter’s” life.

La Grange said that for her, Mandela’s sense of humour remained one of his most outstanding traits. Once he had retired for the second time and was more relaxed, it became even better and sharper. And her ability to laugh, also at her own foibles, was clearly something La Grange shared with Mandela – such as the time she fell out of a stationary helicopter en route to a state banquet for former US president Bill Clinton, during one of his visits to South Africa.

At first, when people said they found it strange that a young white Afrikaans woman had become Mandela’s right hand, she was amused. But slowly the comment took its toll. “At first I found it amusing that it should fascinate people. Later it irritated me. If we want to move forward in this country, the first thing we must do is stop classifying people.

“Madiba didn’t see people’s skin colour, and I learned from him to look for something deeper in every person. The fact that I’m white or any other colour was really irrelevant. What angers me now is the near-fascination and the fuss people still make of it, because it means that people still haven’t accepted that we’re all just South Africans, white or black, or whatever colour or faith.”

About work, La Grange stressed that there was no chit-chat. “It was a job with purpose and I deeply loved him.” Mandela was known for his punctual and strict work ethic, which made him “the easiest person, the best teacher and mentor”. “He was the most patient boss, an incredible person to talk with.”

She believes he chose her as she was a great secretary, shared the same work ethic, and was exceptionally disciplined, punctual, committed, and put her all into her job. And she served him well. “It was a privilege to work for him and I would never want things differently. I learned respect, being respectful to people, in the way we relate to one another, and don’t allow your enemies to determine the grounds for battle.”

Speaking to Talk Radio 702 host Redi Thlabi, Le Grange said that nothing could have prepared her for the loss she felt, the shock and sadness when she was told of Mandela’s death. “I saw him last a few months ago, and out of respect for the family, and for myself, I wanted to remember him like that. It was sad to see him deteriorating; he was such a proud, independent man.”

Mandela was no longer here, but his legacy was. We must study and disseminate it, she stressed, saying it was now the time to be reminded that we must implement his values and morals. “We must achieve the South Africa that we dream of.”

About his death, she said: “Heroes never die. As sad as it makes me that I will never walk into a room again and see his generous infectious smile or hear him say, ‘Oh Zeldina, you are here,’ I have come to terms with the fact that Madiba’s legacy is not dependent on his presence.

“His legacy will not only live on in everything that has been named after him, the books, the images, the movies. It will live on in how we feel when we hear his name, the respect and love, the unity he inspired in us as a country, but particularly how we relate to one another.”

She concluded: “Madiba will forever be present in my life because he made me into the human being I am today. I will cherish every smile, the pleasant but also the difficult times, and especially my barefoot moments. Thank you for all the wonderful opportunities you afforded me, but most of all thank you for believing in me, Khulu.”